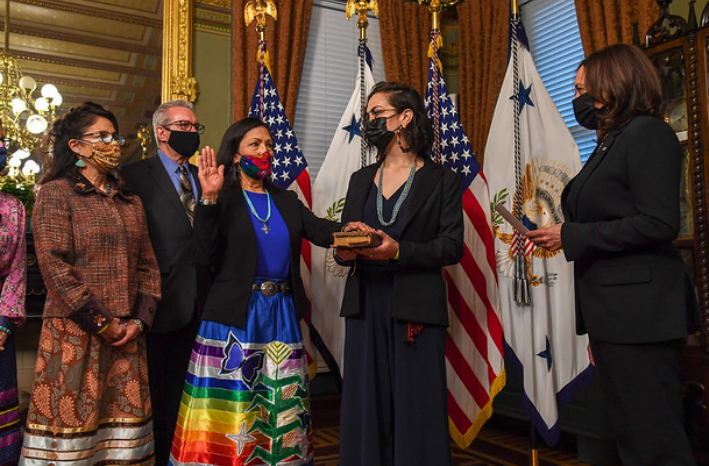 WASHINGTON — Wearing a traditional ribbon skirt embroidered with corn and butterflies, Madam Secretary Deb Haaland of the Laguna Pueblo in New Mexico was ceremonially sworn in as the 54th Secretary of the Department of the Interior with an oath administered by Vice President Kamala Harris.

On one side of Haaland were her two sisters, Zoe and Denise. On her other side, holding the Bible, was Haaland’s daughter, Somáh Haaland. Harris and Haaland, along with Haaland’s family, clapped when the oath was completed. Harris said “History is being made yet again.” Haaland responded, “thank you.”

Six guests were present at Secretary Haaland’s ceremonial swear in, identified by the Office of the Vice President. On Haaland’s list were her partner, her two sisters, two friends and her daughter Somah Haaland, who livestreamed the event over her Instagram page.

Haaland was officially sworn in as Interior Secretary on Tuesday, March 16 in a small ceremony with family. The oath was administered by Chief of Staff Jennifer Van der Heide.

“I am proud and humbled to lead the dedicated team at Interior as we seek to leave a livable planet for future generations,” Haaland said in a statement released by the Interior Department. “Together, we will work to advance President Biden’s vision to honor our nation-to-nation relationship with Tribes, address the climate and nature crises, advance environmental justice, and build a clean energy future that creates good-paying jobs and powers our nation.”

Haaland was confirmed by a 51-40 Senate vote on Monday, March 15. She resigned her role as congresswoman representing New Mexico on Tuesday, according to officials. Her new role as Secretary of the Interior—tasked with managing and conserving most federal land and natural resources, leading the Bureau of Land Management, the United States Geological Survey, Bureau of Indian Affairs, the National Park Service, and managing tribal relations—makes her the first Native American cabinet secretary in U.S. histor