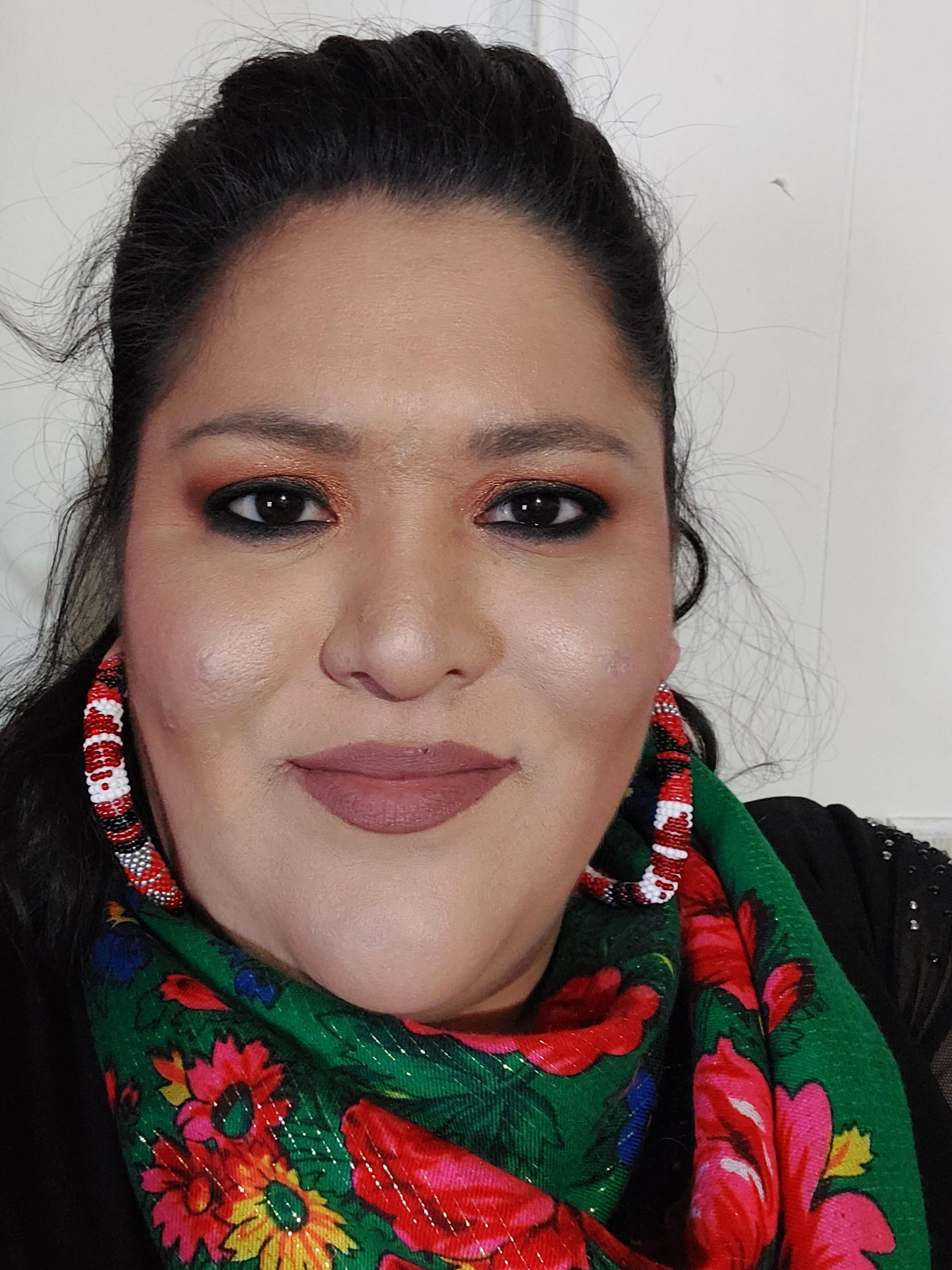 Brien said the County News, a weekly in Montana’s Big Horn County, had a long-standing reputation of not covering Native issues. As its general manager since 2019, she had increased the newspaper’s Native coverage in the county, southeast of Billings, which is more than 65% American Indian.

But she felt that the paper’s owner, the Yellowstone Newspapers chain, did not trust her decisions.

Two weeks after she quit, she launched Four Points Press, an independent digital media company covering the Crow Indian Reservation in Big Horn County. Brien, who lives on the reservation with her family, is Four Points’ owner, operator, and reporter. Three board members help with content management and fundraising.

The mission stated on Four Points’ website is simple: “We are dedicated to giving the voice back to the people of this region and getting the story right.”

Throughout her career, Brien has often seen journalists cover tribal news with no true understanding of Native communities.

“They build their fame, pad their resumes and make something of themselves off the backs of these Native peoples,” she said. “People feel like they’re being used.”

By embedding Four Points in the Crow community, Brien plans to report on issues Crow people want to know about, like basketball, local events and tribal politics.

While she is currently working for no pay, Brien has a partnership lined up that will give her $15,000 for a reporting project. This should be enough to pay herself and a research assistant, she said. In the long term, she plans to sustain Four Points through grants, subscriptions, advertising, and merchandise sold on its website.

That will not be easy. Across the nation, Declining subscriptions and advertising revenue have caused many local news sources to shut down. Newspaper circulation in Montana decreased 26% between 2004 and 2019, according to the U.S. News Deserts Database.

This decrease, however, could create space for previously underreported communities—like Native people—to enter the local news landscape. In its first 16 days up, the Four Points website had 2,297 unique visitors and more than 3,000 views. Brien’s most popular story had nearly 1,000 views.

“People keep saying hyperlocal news is dying, local news is dying, but I don’t necessarily see it as dying,” she said. “Being creative, being flexible, being forward-thinking, are all super-important in the business. I think that a lot of people who are running newspapers are forgetting that.”

Nora Mabie, Indigenous communities reporter for the Great Falls Tribune, a Gannett paper, said Native people have been “consistently misrepresented” by Montana’s local newspapers in the past.

That type of coverage inspired Arapaho and Eastern Shoshone journalist Taylar Stagner to enter journalism. In 2012, she read a New York Times article about her home, the Wind River Indian Reservation in Wyoming. She said she “absolutely hated” the article, finding it personally insulting.

“It’s every nasty thing about the Wind River Reservation from a person who came in, took a bunch of pictures and then left,” Stagner said. “There are beautiful things here… and it doesn’t get the coverage it needs.”

To help improve the region’s coverage of Native people, Stagner accepted a Report for America position covering tribal affairs for Yellowstone Public Radio (YPR) in Montana. But while YPR did its best to support her, she struggled to cover Montana’s Native communities in a way that did not feel like she was extracting something.

“There’s such a long history of people going into Indigenous communities, taking what they want and leaving,” she said. “That’s a big issue in the industry.”

Because Montana has very few journalists directly covering Indigenous news, Mabie said, Native issues tend to get covered only when they intersect with other topics, like crime. This means for some Montana papers, Native news becomes oversaturated with crime stories.

When Big Horn County News did cover Native issues, it focused disproportionately on crime and negative events, Brien said, and “there would be no shiny, happy news about the Native communities.”

A new generation of Native journalists

The Great Falls Tribune, established in 1885, created its Indigenous communities reporter position two years ago. Mabie, a white woman, is the first person to hold it.

She is also the only print reporter in Montana dedicated solely to Indigenous issues. In a state with seven reservations and 12 tribes, this is a large task.

“It’s important that I show up in person to do this reporting,” she said. “That, a lot of times, means driving really far.”

While Mabie is technically responsible for covering all tribes in Montana, she said she focuses more heavily on those closer to Great Falls. These include the Blackfeet Nation, the Little Shell Chippewa Tribe, and the Chippewa Cree Tribe. Those farther away, like those on the Fort Peck Indian Reservation, some 350 miles east, are left with sparser coverage.

For Stagner, covering this diverse range of communities for YPR became overwhelming.

“There are so many different tribes,” she said. “And there’s only a handful of people who are interested in doing Indigenous stuff. I felt a lot of pressure was put on me to do all of it at once.”

While both Stagner and Mabie highlighted the importance of hiring more Indigenous journalists, Stagner felt her identity as a Native woman increased this pressure.

“They sometimes can be fairly callous, or they just don’t understand the social factors in play,” she said. “Nobody knows how it feels – except for this very small national group of Indigenous journalists who know what it’s like to have to beat your head against a wall with a newsroom or an editor or somebody who just doesn’t get it.”

Despite the challenges, Native journalists across Montana are working to address the state’s coverage gaps.

Sandoval remembered a recent story about a local school rebuilding its gymnasium. Char-Koosta, along with other local news outlets, covered the gym’s grand opening.

“What was unique about our story is our reporter noticed the tribal designs on the floor. We were the only newspaper to mention that,” he said. “Different newspapers will come at it with a factual base, but I think that sometimes they kind of forget the Native perspective.”

At the University of Montana School of Journalism in Missoula, associate professor and Navajo journalist Jason Begay directs the Native News Project, a senior-level capstone class in which students learn to cover Montana’s tribal communities. In recent years, students have written about the crisis of missing and murdered Indigenous women, access to health care on reservations, tribal sovereignty, and Native Americans’ roles in Montana politics.

Begay said the program, which began over 30 years ago, aims to put a more realistic angle on issues facing Native people.

The most important lesson students learn is to show up prepared, Begay said. When interviewing tribal members, he teaches students to avoid asking questions that can be learned through a Google search, like how to spell a tribe’s name.

“If you show up with those questions, then they know immediately you’re there because there’s some breaking news, something terrible has happened,” he said. Instead, he ensures that students know tribes’ histories before showing up. “That kind of sets a different tone for the conversation.”

In the decade Begay has taught at the journalism school, he said, Montana media’s coverage of Native issues has become more humanistic.

“I’d like to think that we played a big part in that,” he said. “In part by doing it really well every year, but also in producing a bunch of reporters who have gone out in the field in the state and taken that spirit with them.”

One of those reporters is Brien, who participated in the Native News Project in 2005. “What I did there applies almost every single day as a journalist now,” she said.

Begay added that while coverage of Native news has “absolutely” gotten better, there is still a long way to go. “It’s still terrible,” he said. “It’s not covered nearly as well as it should be, in any sense.”

Native journalists like Brien are tired of waiting for the local news industry to change.

“If we keep doing things the same way, it’s not going to survive,” Brien said. “It’s time for a new generation to step up.”

This article has been updated to note Jason Begay is an associate professor, not an assistant professor. We have also updated the article to clarify Nora Mabie's quotes. We regret the errors.