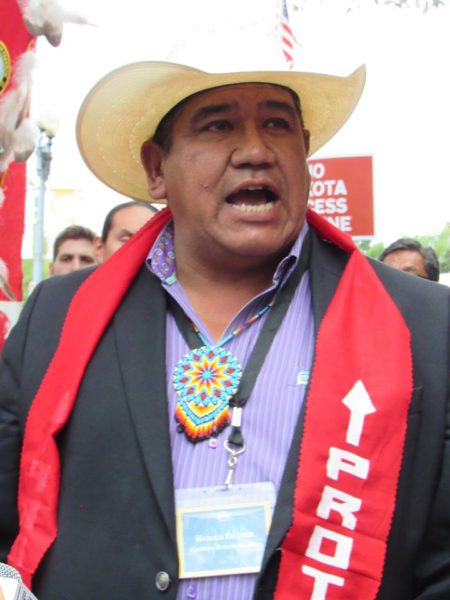 Citing the Fort Laramie Treaty of 1868, Frazier tells the president that the United States agreed “that no white person or persons shall be permitted to settle upon or occupy any portion of the same; or without the consent of the Indians first had and obtained, to pass through the same.”

“The Dakota Access Pipeline continues to trespass on the territory of the Great Sioux Nation and endanger the lives of our people with the possibility of polluting land and water. This Project has been operating without a permit for a very long time and is in violation of your laws and our treaties. The Tribes intend to keep the lands in their original and natural state, reintroducing buffalo and other natural species, and preserving the area for traditional cultural and religious ceremonies. The time to end this threat to our people and honor the treaties is now,” Frazier says in his letter.

The U.S. Army Corps of Engineers is conducting an Environmental Impact Study (EIS) of the DAPL as ordered previously by the U.S. District Court of the District of Columbia.

The DAPL was the center of controversy five years ago when tens of thousands of American Indians and allies protested at Standing Rock. The DAPL crosses beneath the Missouri River at Lake Oahe just half a mile from the Standing Rock Indian reservation in North Dakota, on unceded ancestral lands.

Special Assistant to the President for Native American Affairs Libby Washburn (Chickasaw Nation of Oklahoma) told Native News Online last month that the EIS is underway but did not provide a date when the study would be completed.  However, she indicated she thought it would be within the next year.

“We're in the process of doing an EIS on the Dakota Access pipeline.  We now have a confirmed assistant secretary at the Army Corps of Engineers, who has a proven track record on considering tribal interests. He is leading these efforts. I think this next year, we will see movement, we will see movement on the EIS,” Washburn said.

“Cheyenne River Sioux Tribe hereby requests the end of the Dakota Access Pipeline by stopping its operation and removing it from our territory immediately. We look forward to working with you on this matter,” Frazier continued.