WASHINGTON — A breach of tribal information supplied to the U.S. government for pandemic relief funds occurred Friday evening, in what one observer described as Indian Country’s “Watergate.”

On the deadline day for tribes to submit requests for a share of the $8 billion in relief funds earmarked for Indian Country, tribal leaders began getting phone calls, emails and texts on Friday night from their attorneys and lobbyists. The messages informed them of the disturbing news that information provided by the tribes to the U.S. Department of Treasury’s portal to certify for Coronavirus Aid, Relief, and Economic Security (CARES) Act funds had been sent out via email to non-federal government employees, including to attorneys and lobbyists.

Tribal data and financial information related to some 600 tribes and Alaska Native Corporations was distributed in a spreadsheet, a copy of which Native News Online has reviewed. The spreadsheet includes information requested last Monday by the Treasury Department and the Department of the Interior (DOI), including tribal name, population, land base, numbers of employees and expenditures for the most recently completed fiscal year.

While the submission deadline was Friday, April 17, at 11:59 p.m. EDT, the Tribal Registration Report that was sent out had been generated at 11:47:32 a.m. - Eastern Time. The report was generated by a Treasury Department employee.

The source of the breach is not now known.

In a message to tribal leaders on Friday night, one unnamed tribal leader wrote: “It was confirmed that it was provided and breached from someone within Interior. The information is being distributed among people in DC and outside of the agency.”

In an emailed statement to Native News Online, DOI spokesperson Connor D. Swanson said: “In our consultation efforts with the Department of the Treasury regarding CARES Act funding, we have not been provided any confidential financial information.”

A spokesperson for the Treasury Department could not be reached for comment as of press time.

On Saturday, the National Congress of American Indians sent out a statement on the tribal data breach:

“The National Congress of American Indians (NCAI) is extremely disappointed and disturbed by the release of sensitive information that tribal governments and other entities submitted to the U.S. Department of the Treasury related to CARES Act Coronavirus Relief Funds. This release of sensitive information comes at a time when tribal governments are in dire need of resources to respond to and recover from the coronavirus (COVID-19) pandemic. NCAI demands a full and swift investigation into the source of the data breach.” 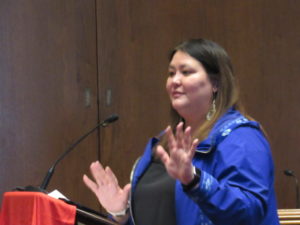 A group of tribal chairmen from the Great Plains region has called for Tara Sweeney to be removed from her post as Assistant Secretary – Indian Affairs.

The breach comes on the heels of a week in which Interior Assistant Secretary-Indian Affairs Tara Sweeney faced severe criticism from tribal organizations for including the Alaska Native Corporations (ANCs) into consideration for CARES Act funding.

Tribes and advocacy organizations across Indian Country said the CARES Act’s funds were never intended for the ANCs. Senate Minority Leader Chuck Schumer (D-N.Y.) and Senate Committee on Indian Affairs Vice Chairman Sen. Tom Udall (D-N.M.) and other senators agree with tribal leaders that the money should not go to ANCs.

Editor’s Note: This is a developing story and Native News Online will update this article as more information becomes available.