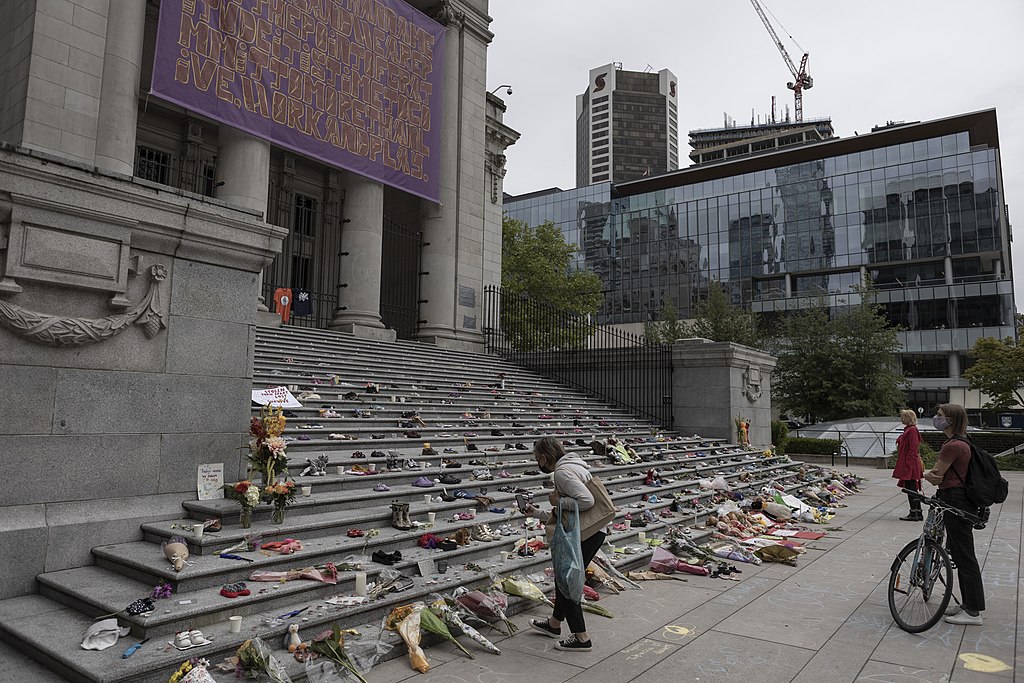 Canadians have celebrated their country’s confederation on July 1, 1867 since 1868, but this year, planned celebrations of the holiday have led to cancellations and protests due to the discovery of hundreds of Indigenous children’s remains in unmarked graves at three former residential schools.

“As National Chief of the Assembly of First Nations, and to help mark Canada Day 2021, I encourage all Canadians to learn about our shared history and the many contributions First Nations people have made and are making every day,” AFN National Chief Perry Bellegarde said in a video message posted on Twitter. “I urge everyone to reflect on the darkness of the past, and commit to doing better as a country.”

At least 70 cities, towns, and villages across 10 Canadian provinces and territories have canceled, postponed, altered, or scaled back their Canada Day events in response to the discoveries, according to the municipalities and reporting from CBC News, CTV News, and other Canadian media outlets. The municipalities include Victoria, Penticton, and the Region of Durham and Durham municipalities.

The City Hall and Burrard Bridge in Vancouver and the CN Tower in Toronto are among buildings that will be lit up orange in solidarity with Indigenous peoples across Canada. #CancelCanadaDay has taken off on Twitter, but according to a Leger poll, 77 percent of Canadians “think it would be best to not cancel Canada Day this year.”

In a statement on June 18, the Federation of Sovereign Indian Nations (FSIN) said it supports First Nations who cancelled Canada Day celebrations in favor of education and celebrations on National Indigenous Peoples Day on June 21. The FSIN represents 74 First Nations in Saskatchewan.

“We are supporting all First Nations across our Treaty territories in this decision,” FSIN Chairman Bobby Cameron said in the statement. “Celebrating Canada Day is being seen as inconsiderate to all the children’s lives that were lost and we encourage everyone to consider the price these children had to pay at the hands of the Canadian government and church.”

During a press conference following the Cowessess First Nation’s discovery of 751 remains of Indigenous children near the Marieval Indian Residential School, Canadian Prime Minister Justin Trudeau said this Canada Day is a time for reflection on both Covid-19 and the country’s relationship with Indigenous peoples.

“But at the same time, many, many Canadians will be reflecting on reconciliation, on our relationship with Indigenous peoples, and how it has evolved and how it needs to continue to evolve rapidly,” Trudeau said. “We have so many things we need to work on together and I think this Canada Day will be a time of reflection on what we’ve achieved as a country but on what more we have to do.”

According to Indigenous activist group Idle No More, 15 Cancel Canada Day protests have been planned for July 1 in municipalities across Canada, including Toronto, Montreal, and Vancouver. Thousands of people have committed to attending or expressed interest in these protests on Facebook.

“Cancelling Canada Day is the bare minimum recognition of the ongoing colonization and genocide perpetrated against Indigenous peoples across Turtle Island,” Idle No More co-founder Sylvia McAdam said in a press release. “The genocide of so-called residential ‘schools’ never ended. It continues today and we’ll use our voices across these lands for MMIWG2S, child welfare, birth alerts, forced sterilization, police/RCMP brutality and all of the injustices we face.”

The color orange has become a symbol of support for healing in Indigenous communities from trauma inflicted by residential schools.

The symbol has roots in the personal story of Phyllis Webstad (Shuswap), whose new orange shirt was taken from her when she attended one of the schools, according to her personal story published by the Orange Shirt Society. According to the society’s website, the establishment of Orange Shirt Day was born out of the St. Joseph Mission Residential School (1891-1981) commemoration project and reunion events in the Cariboo region.

“The events were designed to commemorate the residential school experience, to witness and honour the healing journey of the survivors and their families, and to commit to the ongoing process of reconciliation,” the society’s website says.

The society says that Orange Shirt Day has since been recognized by resolutions passed by some local governments, school districts, and First Nations. It added that the date of Orange Shirt Day, Sept. 30, is around the time when Indigenous children were taken from their families to the residential schools.

The Department of Canadian Heritage did not immediately respond to a request for comment.