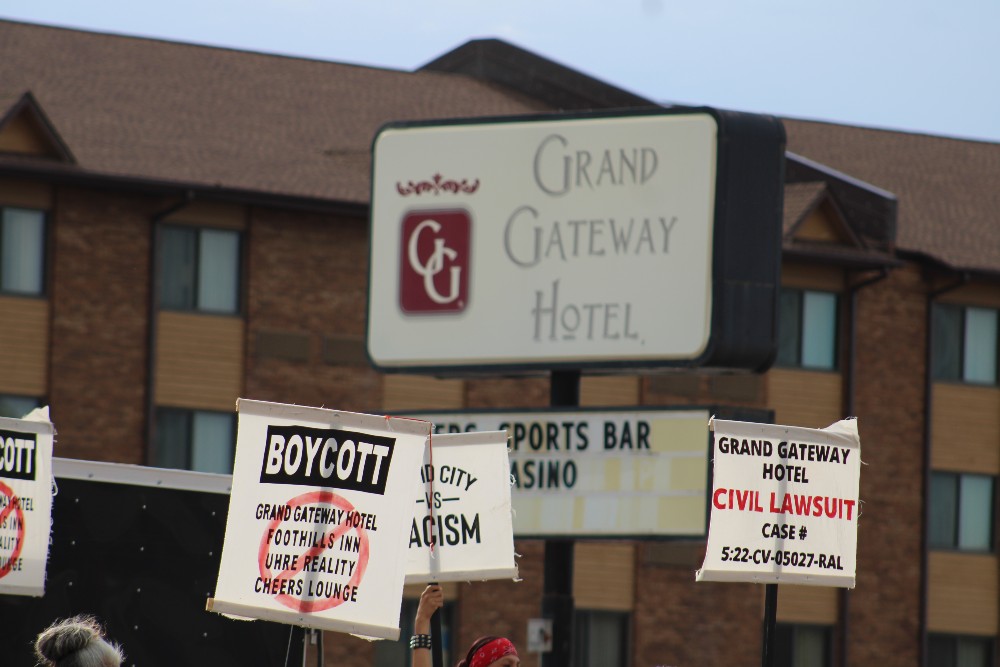 RAPID CITY—The racist comments a hotel owner made has spurred regular protests at the Grand Gateway Hotel in Rapid City, South Dakota. A group of people have demonstrated outside the hotel property every Monday, Wednesday, and Friday for the last 12 weeks.

On March 20, Connie Uhre, a co-owner of the Grand Gateway Hotel, made disparaging comments about Native Americans on the Mayor of Rapid City’s Facebook page, saying she is unable to distinguish “between a good Native and a bad Native.” She has also threatened to ban Native Americans from the property.

Led largely by NDN Collective, a not-for-profit Indigenous-led organization, protestors have been demonstrating outside the hotel rain or shine.

Sunny Red Bear, NDN Collective Director of Racial Equity, told Native News Online, “There is systemic racism that is happening all over this city. This accountability, here, is just the beginning.”

“We want the Department of Justice to shut down the Grand Gateway Hotel,” said Red Bear.

“What are the things that create the conditions for racism to continue to exist in Rapid City?” she asked. “It’s not holding people accountable.”

Uhre was arrested on May 27 for three counts of simple assault, after she sprayed a cleaning agent towards the faces of several demonstrators, including Red Bear. The incident was recorded and Uhre, 75, faces up to one year in jail and a fine of up to $2,000.

Rapid City mayor Steve Allender said in a statement that he condemns the statements made by Uhre.