Berkeley Shellmound Named One of America’s Most Endangered Places 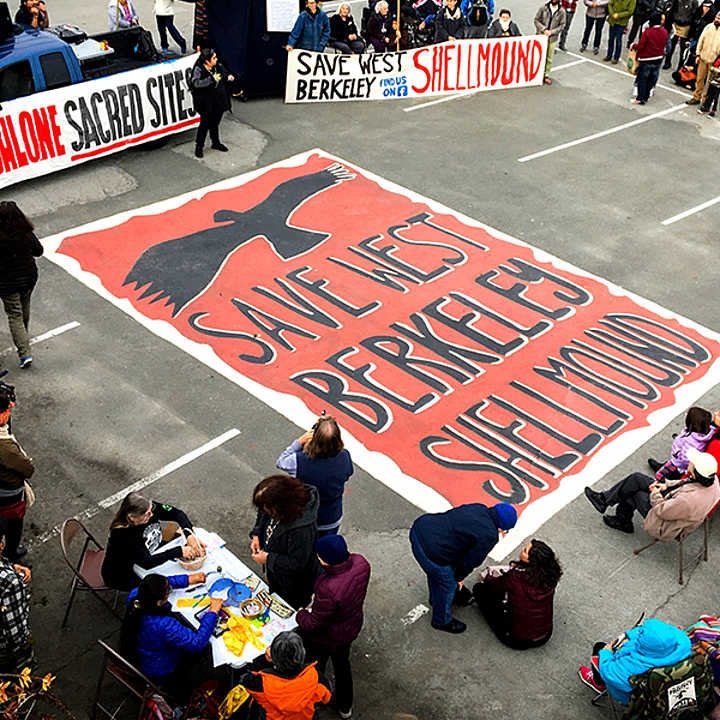 BERKELEY, Calif. — The National Trust for Historic Preservation has placed the West Berkeley Shellmound and Village site on its 2020 list of America's 11 Most Endangered Historic Places.

“We have never left our territories, we have an unbroken tie to this land,” said Corrina Gould (Lisjan), tribal leader of the Confederated Villages of Lisjan (Ohlone), who explained during a Sept. 24 press conference that, as a child in school, she was told her tribe was extinct.

Berkeley Mayor Jesse Arreguin described the site as “Ohlone territory” and “truly the birthplace of Berkeley and the Bay Area.”

Other local and national leaders showed strong support for the preservation of the site, including Katherine Malone-France of the National Trust, Rep. Barbara Lee (CA), Rep. Deb Haaland (Laguna Pueblo) (NM), and Sophie Hahn, Vice Mayor and member of the Berkeley City Council, who is an advocate for historic preservation in Berkeley and has highlighted the value of the historic site.

“In many ways, the West Berkeley Shellmound is a cautionary tale that teaches the pain a people can experience when they are confronted with the loss of connection to their history, and in particular, their sacred sites,” said Malone-France, chief preservation officer of the National Trust. “Halting the further destruction and desecration of the Shellmound and acknowledging this site as a sacred resource of the Ohlone people demonstrates that preservation can be a powerful force for reconciliation and justice.”

One of the tragedies of the development of the San Francisco Bay area was the destruction of the Ohlone villages, shellmonds and burial sites. The shellmounds, some as high as thirty feet and covering areas as large as football fields, were used to pave city streets.

“What remains of the West Berkeley Ohlone Shellmound and Village site, which is thousands of years old, and perhaps the first village on the San Francisco Bay, is under an asphalt parking lot slated for commercial development,” said Rep. Lee.

Rep. Haaland expressed her gratitude to the Ohlone people and community for their persistence in defending their cultural site. “I hope for your success because this sacred cultural place is not too much to ask for when Indigenous people have given so much, have lost so much and have an obligation to protect what is left for future generations,” she said.

According to Brian Turner, a senior field officer and attorney for the National Trust’s San Francisco office, the site is unique in that it’s the first time the National Trust has addressed sacred site protection in a big city. As one of the oldest sites in the Bay area representing pre-European contact, Turner said his office was committed to protecting it.

“We are incredibly honored and grateful to receive this recognition for the sacred site we have been fighting so hard to preserve,” said Gould, who has helped lead the Shellmound preservation campaign, as well as many other protection efforts for sacred Ohlone sites in the Bay Area. “Not only does it validate the historic significance of this site to the Ohlone people, but it also establishes one of our sites in its rightful place as a significant and essential part of the history of this region and the entire nation.”