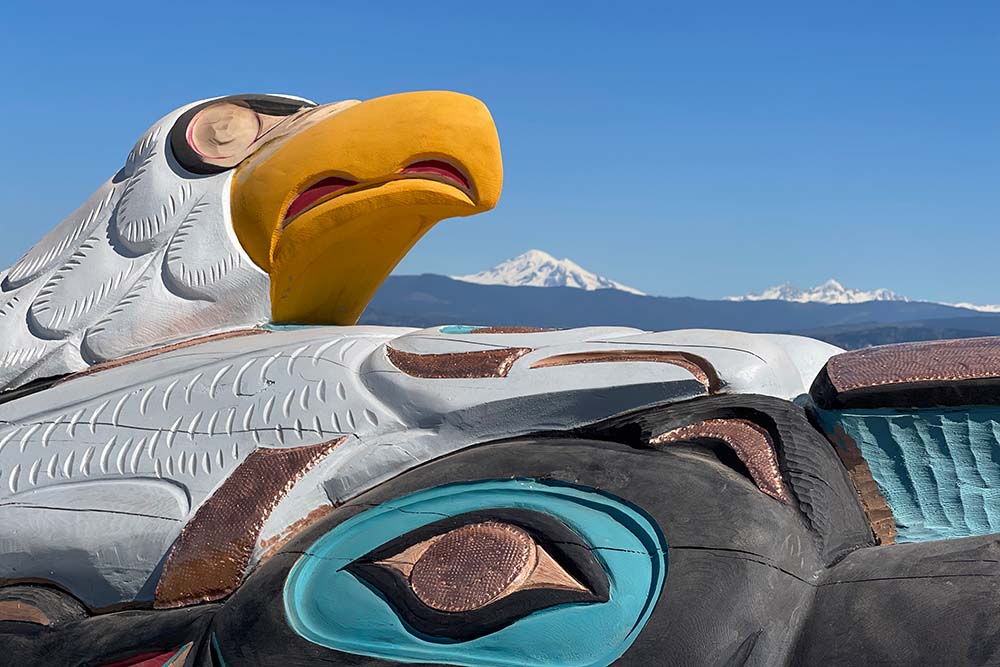 BELLINGHAM, Wash. — A 24-foot totem pole carved by Lummi Nation tribal members is getting its finishing touches this week before embarking on a cross country journey—deemed the Red Road to D.C.— from Washington state to Washington D.C. next month as a gift to the Biden administration.

Along the way, the pole will make stops—accompanied by a team of about a dozen of its carvers—at sacred Native American sites in Idaho, Utah, Arizona, New Mexico and South Dakota before reaching its final destination: the Smithsonian’s National Museum of the American Indian, where it will be displayed this fall.

The purpose of the journey is to bring recognition, honor, and calls to prayer for sacred sites threatened by development and resource extraction, according to the main carver, Jewell Praying Wolf James. James is the only surviving member of the Lummi Nation’s House of Tears Carvers.

“We’re going to be working with local tribes to perform various blessing ceremonies and working together to help each other watch out for these sacred sites so that corporations or governments don’t go in and needlessly destroy them,” James said in a recorded interview where he describes the symbols chiseled into the 400-year-old red cedar. 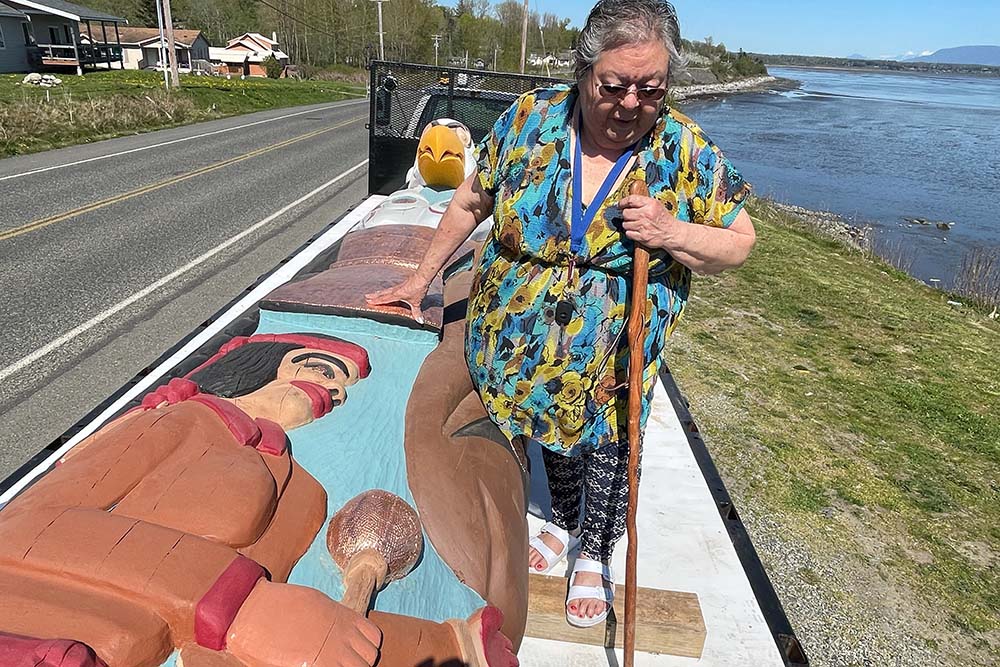 Among the traditional Native lands the totem pole will make stops at on its journey across the United States is Bears Ears National Monument in Utah, a protected area where Navajo Nation citizens are currently calling upon the Biden administration to restore and expand after its protected acreage was shrunk by 85 percent under former President Donald Trump.

Other stops include the Black Hills of South Dakota and the Missouri River, where the Dakota Access Pipeline crosses just half a mile upstream of the Lummi Nation’s reservation. Earlier this month, the U.S. Army Corps of Engineers said they will allow DAPL to continue to flow without a federal permit, despite strong pressure by Native Americans and environmental groups that had their hopes up that the Biden administration would order the pipeline be shut down. 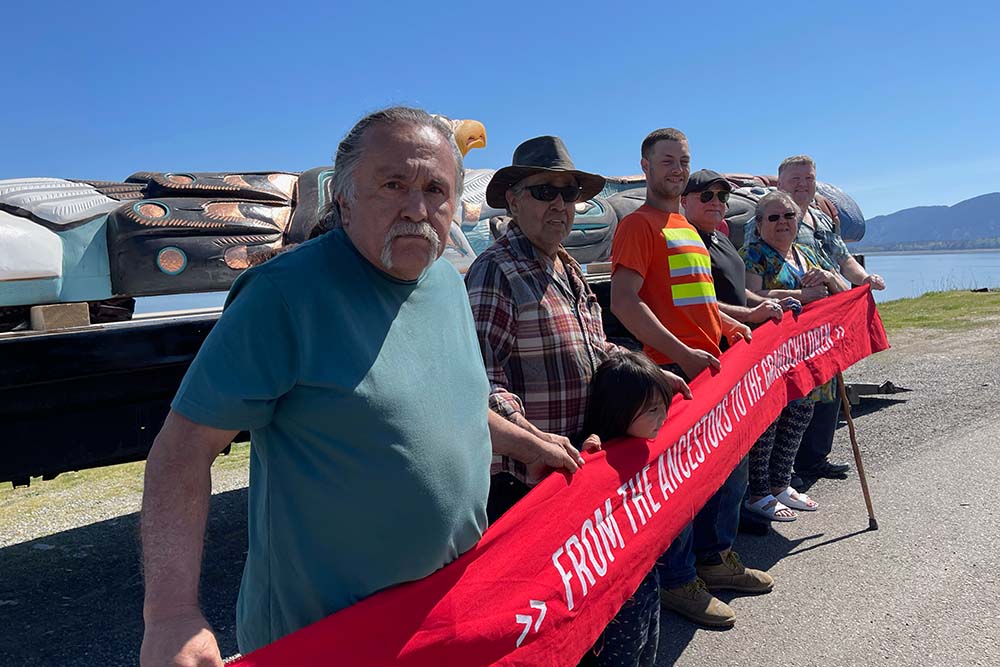 This week, the group announced that, due to an earlier-than-expected completion of the totem pole, it will first embark on a grassroots organized tour of the West Coast prior to heading east. The group will head south to San Diego from the end of April through May 24, making stops at tribal territories along the way, said Freddie Sul ka dub Lane, Lummi Nation citizen and Northwest tour organizer.

Lummi Nation carvers aged four years old to 70 participated in the construction of the totem pole, James said. Each carving on the pole gives nod to specific Native American folklore and tribal connections that span beyond the Canadian and Mexican border, he explained in his artist’s statement.

The pole includes Chinook salmon, a wolf, a bear, an eagle, and seven tears—a reference to seven generations of trauma passed on from colonialism. Additionally, the pole includes an image of a child in jail in reference to the U.S.-Mexico border issues and the bloodline relationship of immigrants seeking entry to the country whose lands they once occupied. “Those are our people over there,” James said. 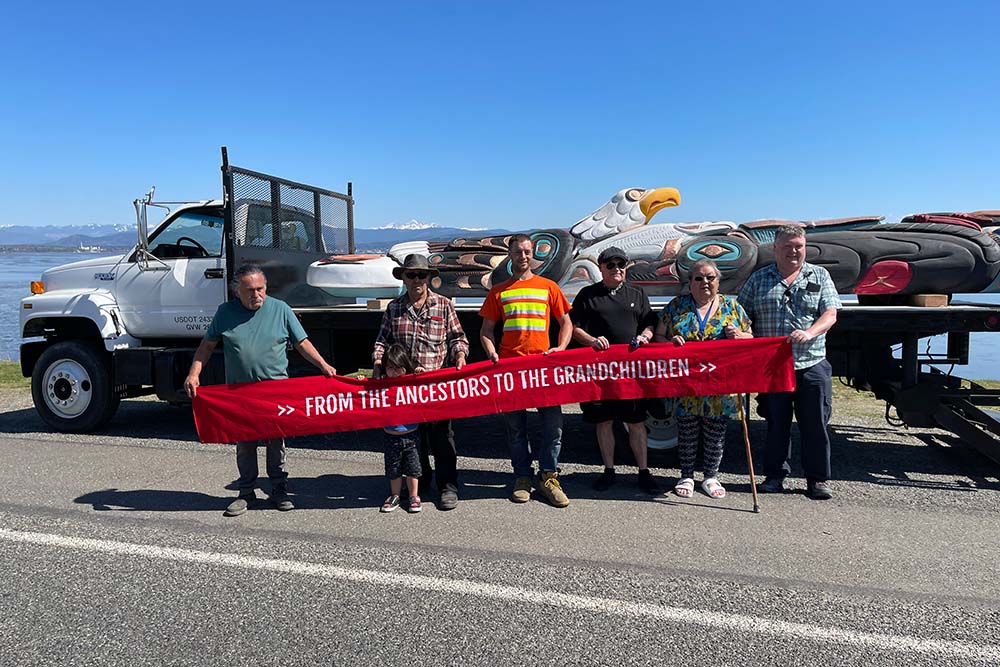 According to the head carver, working on totem poles opens up a path to the spirit. He said he hopes the gifted pole will transmit that spirit to Washington D.C. and allow the Biden administration to follow through on their treaty obligations.

The Smithsonian’s National Museum of the American Indian Acting Director, Machel Monenerkit, said in a statement to Native News Online that the museum serves as a venue to foster dialogue about the important contemporary issues impacting Indian Country.

“The journey of the Lummi Nation's totem pole raises awareness of sacred sites threatened by development and resource extraction,” she said. “We look forward to finalizing the details on when and how to mark the occasion of its arrival to the museum.”

James agreed that the purpose of the Red Road to D.C. journey, at its core, is to drive conversation.

“Many of us believe that the United States owes it to us to listen. They entered into a sacred relationship with us, some people call it a treaty,” James said. “But they use their voices to promise. To us, when you use your voice, it takes the sacred wind and the great spirit gives you the energy to talk, and your commitment is one of spiritual significance to Native Americans. We hope by bringing this totem pole to Washington, D.C., we’ll also awaken the sacred commitment the United States has to the Native American Nations.”

Dates and destinations for the Red Road to D.C.: