GRAND RAPIDS, Mich. — As businesses throughout Indian Country close to help stem the spread of COVID-19, Native American casinos are donating food from their shuttered restaurants to  food pantries, shelters, schools and nonprofits in their neighboring communities.

Employees of Gun Lake Casino in Michigan packaged, loaded and transported more than 2.75 tons of food that was split between Dégagé Ministries, Feeding America West Michigan, and Hand2Hand. (Courtesy photo.)

Gun Lake Casino near Grand Rapids, Mich. was one of the first tribal gaming facilities to announce it would voluntarily close its doors. Owned by the Match-E-Be-Nash-She-Wish Band of Pottawatomi Indians, the casino announced Saturday that it would close for two weeks beginning at 3 a.m. on Monday in an effort to protect the health and safety of team members and guests.

As it worked through the logistics of shutting down operations last weekend, the casino found itself with several coolers full of fresh ingredients. On Monday morning, team members came together to begin packaging, loading and transporting nearly three tons of food to local charities in Western Michigan. Gun Lake Casino’s food supply was split between Dégagé Ministries, Feeding America West Michigan, and Hand2Hand.

“We recognize this is a worrisome time for all, especially for the families who may be unable to afford food,” said Sal Semola, president and chief operating officer for Gun Lake Casino.

Gun Lake has a decade-long history of supporting Dégagé Ministries, which provides nutritious meals to hundreds of vulnerable individuals in the Grand Rapids area on a daily basis.  The casino said team members delivered and filled Dégagé’s storage spaces “to capacity” with fresh foods and fully prepared meals.

The other recipients of food from the casino serve different segments of the nearby community.  Hand2Hand serves more than 7,500 students in eight counties, and Feeding West Michigan distributes food to local food assistance organizations in multiple counties.

About an hour south of Gun Lake Casino, the Pokagon Band of Potawatomi made a similar gesture of support for the communities where it operates its four tribally owned casinos. The Pokagon donated nine pallets of food totaling 7,450 pounds from the dining facilities at its Four Winds Casino locations, which all shut down operations at 3 a.m. on Tuesday.

The donated food  will be distributed to those in need throughout Southwest Michigan and Northern Indiana by nonprofits Feeding America and Cultivate.  The food items that were part of the donation included dairy products, fresh vegetables, fresh fruit, baked goods, and fresh fish. 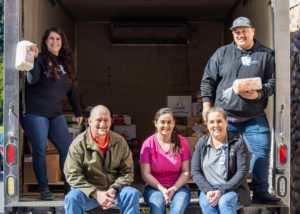 The Stillaguamish Tribe donated the food supply from the Angel Of The Winds Casino Resort’s dining venues to its employees as well as nearby community food banks. (Facebook photo.)

In the state of Washington, which has been hit very hard by the virus, the Stillaguamish Tribe donated the food supply from the Angel Of The Winds Casino Resort’s dining venues to its employees as well as nearby community food banks. The Arlington Community Food Bank and the Stanwood Camano Food Bank were each scheduled to receive a delivery of approximately 1,800 pounds of food, according to a news report.

“We are very grateful to be a part of this community, and we are all going to get through this together,” General Manager Travis O’Neil told CDC Newswire. “With these food donations, we hope that we are able to help those in need at this time.”

South of Seattle, the Tulalip Tribes’ decision to close their Quil Ceda Creek Casino created a windfall for a local food bank, according to a report in the Marysville Globe.  The casino donated nearly 2,700 pounds of food, which had been ordered for the casino’s restaurants, to the nearby Marysville Food Bank. The food included hundreds of pounds each of meat, produce, bread and baked goods.