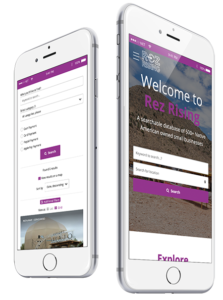 TUBA CITY, Ariz. — Rez Rising, a website and a smartphone app for iPhone and Android users, is seeking to promote Native American small businesses on the Navajo and Hopi reservations.

One main goal behind the establishment of Rez Rising was to identify where Native-owned small businesses are so that tourists and those who want to do business with Native American-owned may do so.

Since launching on January 1, 2020, more than 600 small businesses have already signed up for Rez Rising and the number is growing every day.

Rez Rising was created by Change Labs, a Native American-led nonprofit organization started in 2014 in Tuba City, Arizona. Since then, Change Labs has worked with dozens of Native American entrepreneurs to grow their businesses. But it is not always easy to establish a business on an Indian reservation due to barriers that are not often found elsewhere.

“We listened and documented the barriers and problems small business owners have on tribal lands,” said Heather Fleming (Navajo), who serves as the executive director of Change Labs. “Some of the most basic things to start a business, tribal members struggle with, such as access to land, lack of rental space and the lack of infrastructure,” Fleming continued.

The 600-plus number of businesses that have signed up for Rez Rising has exceeded the expectations of Change Labs employees, Fleming said.

“We went into this project without a whole lot of expectations. Our goal was to see if we could get 500 small businesses to sign up,” said Fleming. “Then we hit 500 right away. We had been so focused on the implementation of the app. We are excited because now we have what we think is the largest database of small businesses on the Navajo Nation.”

“The Rez Rising app helps to promote entrepreneurs by creation of an online tool to let people know where they are,” Fleming says. “Reservations have unique problems, such as lack of physical addresses. Google maps cannot identify where businesses are because in order to even register, you have to have a physical address. Our app allows business owners to take a pin and drop it on our map to where they are located.”

While the primary focus of launching Rez Rising was concentrated on the Navajo and Hopi Reservations, small Native American-owned businesses from reservation border town, as well as Albuquerque, N.M. and Phoenix, Ariz. have signed up for the app.

Change Labs sees Rez Rising as an answer to business owners who live on parts of the reservations that have no running water, no electricity and no internet. Native American small business owners with cell phones can access the app and maintain a presence on the web.

Small business owners can select from some 20 options of types of business they are doing business in when signing up to market their business. Types of businesses range from agriculture, professional services, retail to ranchers.

Funding for the Rez Rising project was provided by the W.K. Kellogg Foundation and the United States Department of Agriculture (USDA).

Fleming says people have inquired about Rez Rising from as far away as Canada, but Change Labs only has capacity to serve its service area in America’s Southwest.