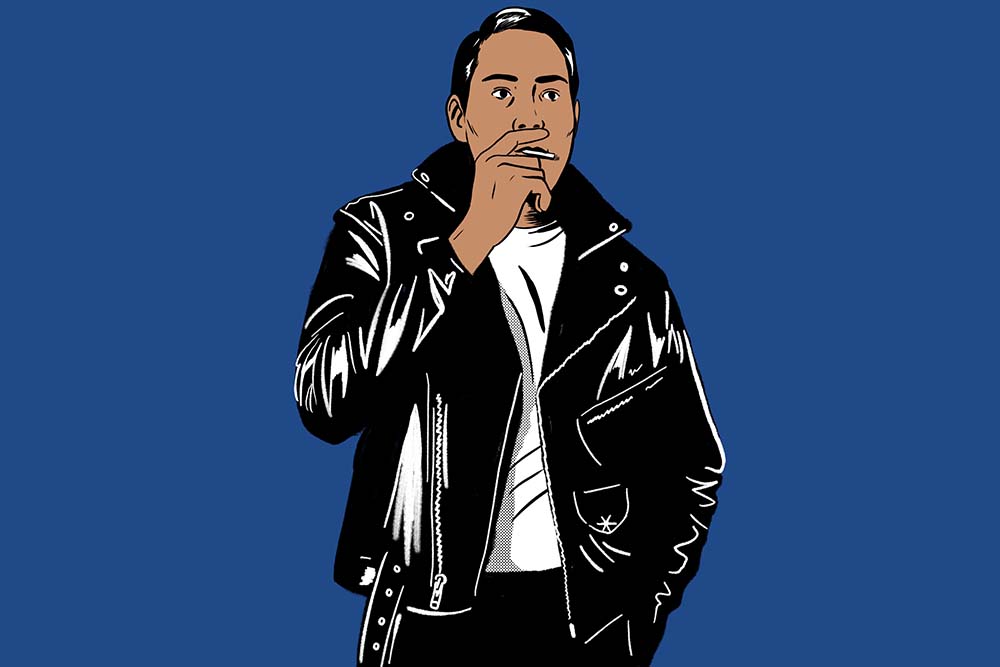 This weekend and next week, Indian Country is animated with exhibits and experiences with powerful pop artists, an Anishinaabe extravaganza for all the senses, and a sweet Chicago-based celebration of singing, music-making,dancing and storytelling.

Native News Online’s event guide is here to hook you up with the hottest upcoming happenings. 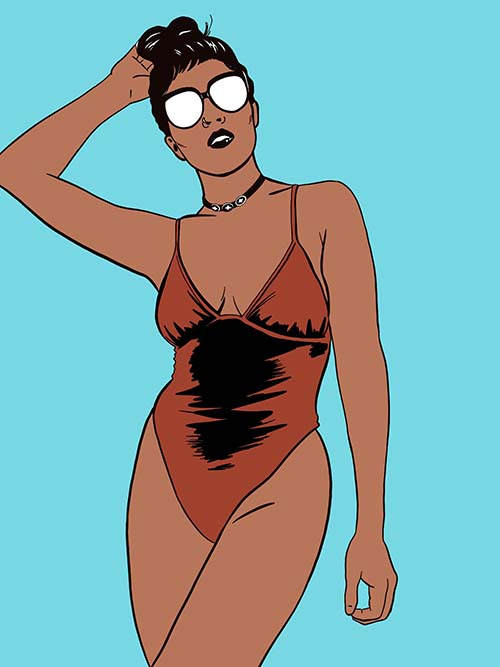 Summertime KIss by Yakama artist Carmen Selam is featured in her solo exhibit The Indigenous Divine, on display at Oak Hollow Gallery in Yakima, WA through July 29. (Carmen Selam)WHEN: Through Friday, July 29

“They’re all portraits of my friends who I am completely inspired by,” Selam told Native News Online. “It’s meant to highlight the beauty of contemporary Native people.”

Selam celebrates her friends in icon-ready, frame-filling portraits and photographs jam-packed with both popular and obscure cultural references.

For instance, Selam said the piece Rebel Rebel Reimagined is directly influenced by the moody 1961 film masterpiece The Exiles, about a lost generation of relocated southwest Natives fighting to find their place and purpose in wild and gritty Los Angeles.

In the image, Selam’s filmmaker friend Echota Killsnight echoes the classic, slicked-back hair and leather jacket look of The Exiles’ inhabitants and the era it embodies.

Summertime Kiss, a strong and sexy image adapted from a selfie of a friend and former co-worker, is also infused with Selam’s love of sleek and stylish cinema.

“That one is especially influenced by Frank Miller’s movie Sin City. I really like to show the strong lines of a person,” Selam said. “I either shoot my models myself or  they send me selfies of some kind. I really want them to send me images where they feel the most powerful. In that image, she is definitely in her own element. She’s just taking up that space, I really want my models to fill the whole space. As Indigenous people, in this day and age, it’s not our job to shrink anymore. So in the images I create, it’s really important to feel that power. “ 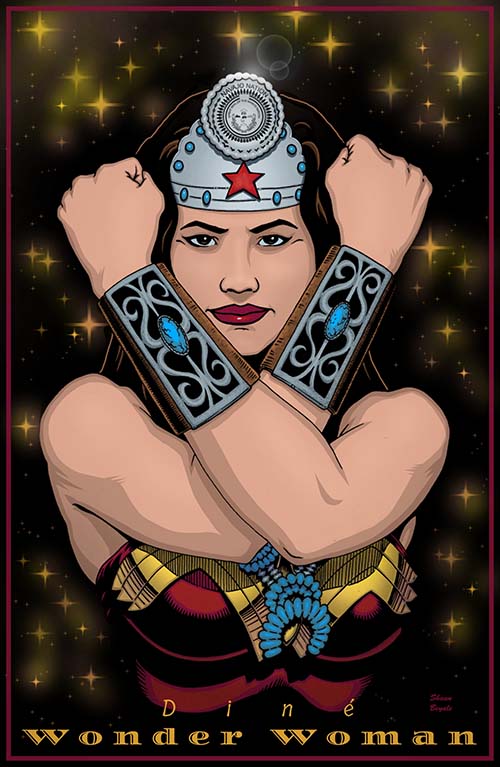 Diné artist Shaun Beyale is a master of the comic universe.

When he’s not making magic with Marvel as a collaborator on the Indigenous Voices series, Beyale works on his own personal projects centered on the Indiigenous female superheroes he created himself: Navajo Wonder Woman and Ayla The Monster Slayer.

On Saturday, Beyale, who was obsessed with comic books as a kid growing up on Navajo Nation, will bring his creativity, skills and experience to the Indian Pueblo Cultural Center for a special presentation.

“I'll be talking about my background, going to art school, my art career and my goals and aspirations as an artist,” Beyale told Natve News Online. “And I'll probably be doing a live drawing demo while I'm talking.”

Beyale’s focus on strong female characters comes from both his family background and early connections with charismatic characters.

“Growing up Ii was always just with my mom, my grandma, my aunts..mainly females,” he said. “And my favorite characters were female characters, like Storm and the Phoenix. They’re strong characters and they were the ones I gravitated towards.”

Working with a powerhouse like Marvel is a wonderful, door-opening opportunity, but Beyale also strongly encourages artists to create and take ownership of their own unique universes.

“It’s good to partner with companies like Disney and Marvel but it’s also good for people to represent themselves and own their work. In this day and age, with the power of the internet it's a lot more feasible and genuine when we can do it ourselves.  We don’t need a middle man,” Beyale said.  “That’s why I chose to create my own characters and I want to self-publish them.  Everything I do with the characters I create, I own it.”

A rich and soulful mix of Indigenous music, dance and spoken word will fill Chicago’s Owen Theatre when The Mitchell Museum of the American Indian in Evanston, Illinois, presents The Sweetest Season. 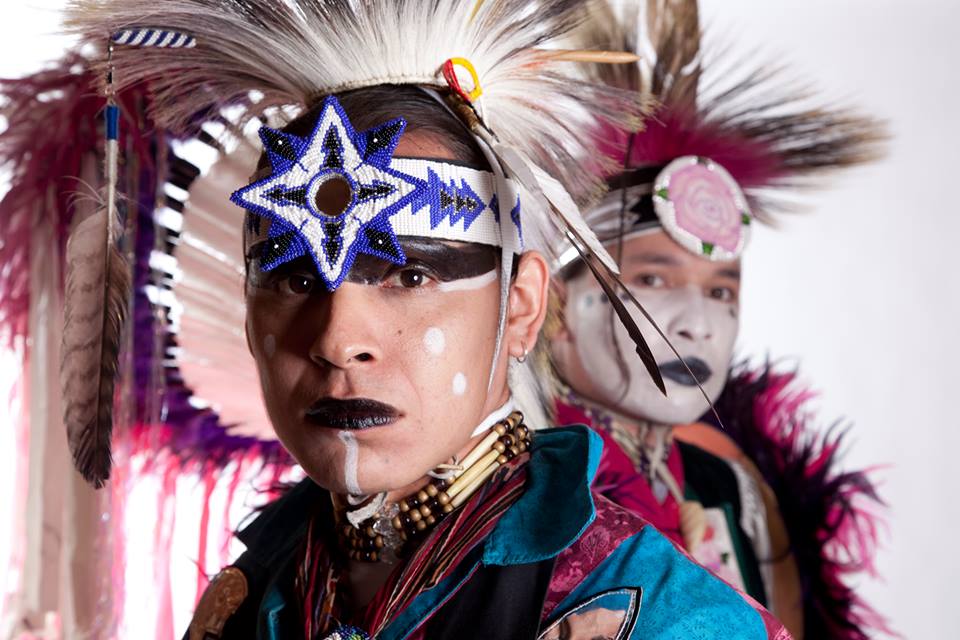 Attendees at this year’s Anishinaabe Art Festival just may get a taste of the hilarious hip hop hit Greasy Greasy Frybread.

Mvskoke hip hop artist Sten Joddi, who popularized the practically pornographic tribute to the fave comfort food as the outrageous rapper Punkin’ Lusty on Reservation Dogs, is just one of the fest’s tantalizing attractions.