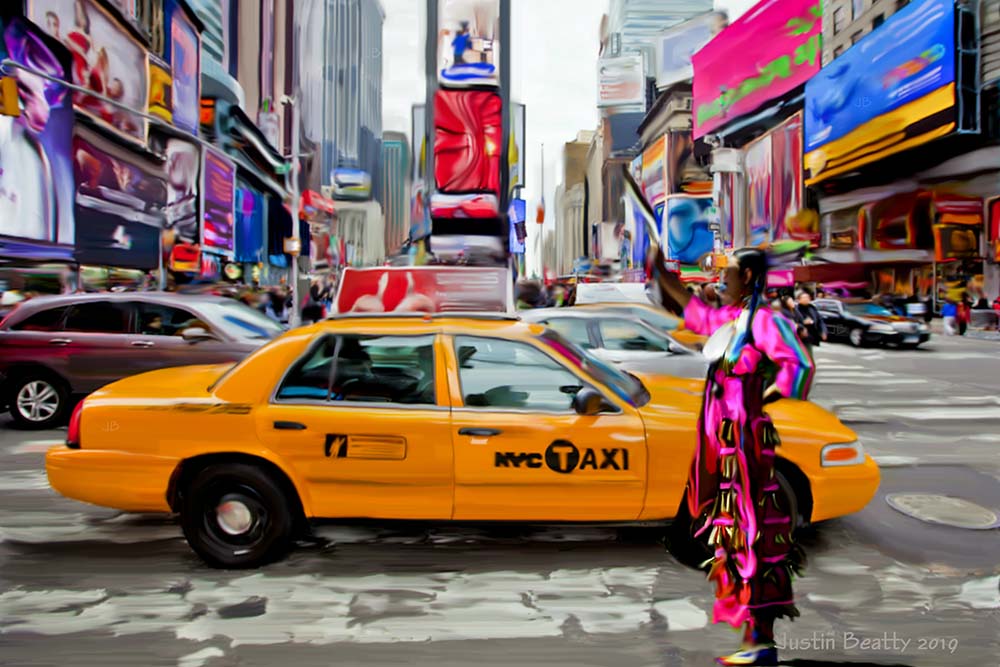 This weekend and next week, Indian Country is coming together to celebrate Indigenous pride in the modern world and empower Native creatives with the tools they need to succeed.

Highlights include a fashion and business showcase centering the creative Native women of Montana; a soaring, spiritual flute performance; and an emotional art show commemorating the Trail of Tears. 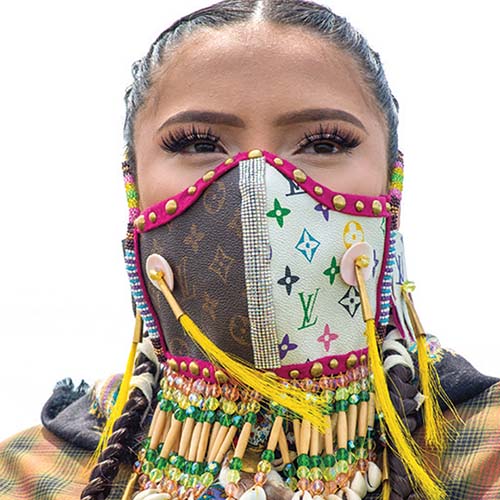 The Night & Day mask, created by Chippewa Cree designer Rebekah Jarvey and modeled by Caitlin Ironman, is featured in the Native Voices art show, running through May 7, at Five Points Gallery in Torrington, CT. (Rebekah Jarvey)In the painting Gotta Make Grand Entry, the concrete jungle becomes the concrete jingle, as a Powwow dancer in the city hails a cab.

For Ojibwe and Occaneechi Saponi artist Justin Beatty, who grew up on Long Island,  such a seemingly out-of-place sight isn’t so unusual.

“My mom would take my sister and me to powwows in Manhattan and Queens, so back then it wasn't uncommon for me to see Native folks in their regalia standing outside powwows at the McBurney YMCA in downtown NYC,” Beatty told Native News Online. “Most of the Native folks I knew growing up lived in or near cities, so I always felt cities were just as much our spaces too since it's all Native land. I wanted to create art that shows us in ‘modern spaces,’ as people here, now, not relics of the past.”

All of the spotlighted artists mix the modern and traditional to stunning and thought-provoking effect. Beatty’s work exemplifies the concept of exuding vibrant Natve pride in contemporary settings.

"We exist in modern spaces. We live in cities & reside in skyscrapers. We put our trash out at the curb. We work 40 hours a week. Yet we also keep the thread from our ancestors to our descendants intact,” he said. “ We are living examples of duality. We decolonize spaces by being ourselves in a world built to strip us of identity. We are still here. We hold powwows in almost every major metropolitan city in the U.S. & Canada."

At the beginning of the pandemic, Jarvey gave life to the flashy, eye-catching mask that ignited her career. It went viral online and publications across the country came calling to feature it.

In the two years since its creation, the mask has remained with Jarvey and traveled with her from the Rocky Boy Reservation to fashion shows and art markets in the southwest, Rapid City, and beyond.

The Native Voices show marks the first time the mask has traveled alone to a destination without its maker.

“The best way to explain parting with the Night & Day Mask is if your child goes away to college and you’re happy they are growing up and moving forward, but sad that they are leaving your side the first time,” Jarvey told Native News Online. “It’s my baby and I’m really protective of it, and it has brought me a lot of happiness. It gave me the platform to take my art seriously and the motivation to become the artist/designer that was embedded in me for generations.”

Jarvey is grateful to Five Points for giving her and other Native artists a platform.

“Five Points is one of Connecticut's most well-known contemporary art spaces,” Jarvey said.  “I feel it's highly important for Native American Art to be showcased in these spaces to let folks know we are adaptive, beautiful and we still have our culture and way of life. “

WHEN: Thursday April 14 and Friday, April 15 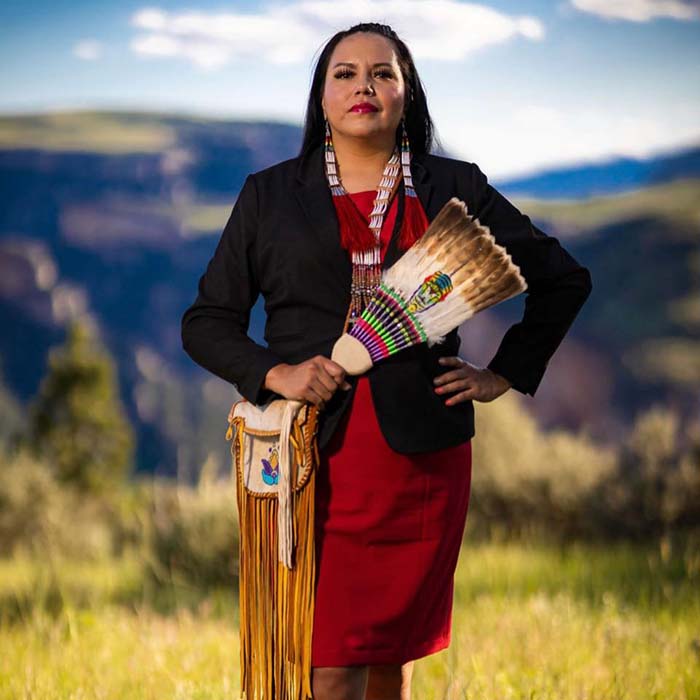 Cora Kay Chandler(Aaniiih) of Cora Katy Productions is a co-founder of The Big Sky Indigenous Women in Fashion and Art Gala & Indigenous Business Symposium, taking place on Thursday April 14 and Friday, April 15 at the DoubleTree Hotel in Billings, MT. (Cora Kay Productions)The business-savvy designing women of Montana are joining forces for an entertaining and enriching fashion, art, and business showcase.

“Our objective is to bring the Big Sky Indigenous women together to showcase their fashion. We wanted to give them a platform to utilize to showcase their items,” Chandler told Native News Online.  “A lot of times we have to go out of state to really deliver any of our products. If we can bring all of these ladies together, maybe we can make this an annual event where we give people the opportunity to showcase their items here up in the northern states.”

To make the event a networking and enrichment opportunity for those who aspire to emulate the featured designers and vendors, attendees can learn what it takes to make it as an entrepreneur in the business symposium, which will be spearheaded by Tonya Plummer, Executive Director of the Montana Native Growth Fund.

The symposium will take a holistic approach to business-building, addressing topics from learning to deliver a quick, effective marketing pitch, developing a business plan, as well as mental and spiritual empowerment.

Bethany Yellowtail of B. Yellowtail Collective will also be on hand to deliver a presentation  about how she started her business. She will also offer insight on fair pricing, which is of particular interest to Montana entrepreneurs.

“Here in Montana, we have to either order our supplies out or come to Billings, Montana to get them,” Chandler said. “Sometimes, they have to drive three hours tto pick up supplies,  so with gas prices and what not,  we want to make sure that they know how to price things accordingly.”

Chandler added that the event is also a way to help cultivate a supportive and uplifting  art and business community.

“Our (goal) is to bring everyone together . We face a lot of lateral violence and tribalism,” Chandler said. “Instead of being crabs in a bucket, we want to start letting people know that’s not cool anymore and we really want to lift eachother up and share opportunities with each other.”

The 51st Annual Trail of Tears Art Show and Sale

WHEN: Through Saturday, April 30 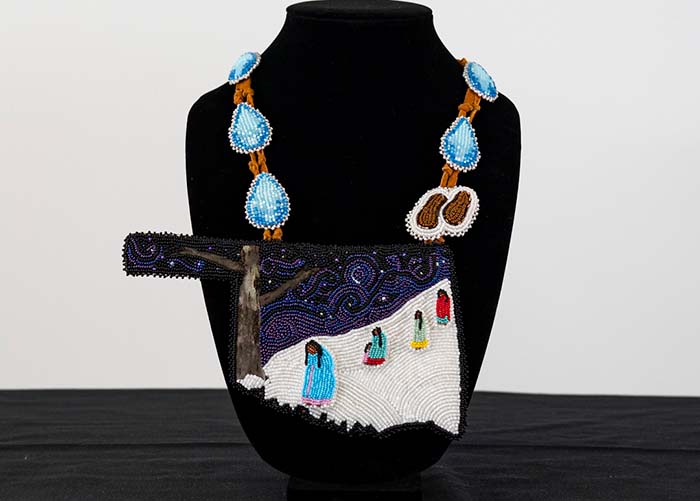 The Trail of Tears Art Show and Sale debuted in 1972 and is the longest-running juried Native art competition in Oklahoma.

The virtual and in-person show is designed to commemorate the forced displacement of more than 60,000 people from their tribal homes in the southeast to Indian Territory in Oklahoma. It features heritage-preserving art in forms that include basketry, painting, and traditional attire, honoring those lost during the long, cold, and tragic walk, while remembering their resilience.

One of the most emotional and evocative is the ornately beaded necklace titled “Always Remember,” by Cherokee artist Andrea Tidwell, which won third place in the diverse arts category. The heart of the piece is an Oklahoma-shaped snowscape with shawled beaded figures bending to combat the cold as they trek on foot under a swirling, stormy sky. 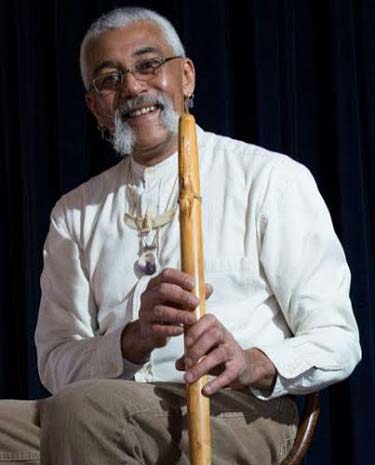 Chaubunagungamaug band of Nipmuc artist and composer Hawk Henries will perform and take part in a discussion about Evoking Ancestral Memory on Thursday, April 14 at the Yale University Art Gallery in New Haven, CT. (Yale University Art Gallery)Using fire and hand tools, Hawk Henries, of the Chaubunagungamaug band of Nipmuc, makes wooden flutes that he plays to bring health and peace to the world.

His journey to flute-making mastery began when his family gifted him his first flute. In an attempt to improve the instrument’s sound quality, Henries broke it, committed himself to repairing it, and after six months, it was fully functional and Henries emerged as a self-taught flute maker.

In 1993, the former Navy serviceman and professional in the fields of mental health and substance abuse counseling for adolescents decided to devote his life to full-time flute making, composing, and playing.

Since then, he has shared the beautiful sounds of healing and hope in places and showcases including the New Orleans Jazz & Heritage Festival, Harvard Divinity School, Brown University, Abbe Museum, and National Museum of the American Indian.

Next Thursday, Henries will perform and take part in a cultural  discussion during an online and in-person event at the Yale Center for Collaborative Arts and Media.