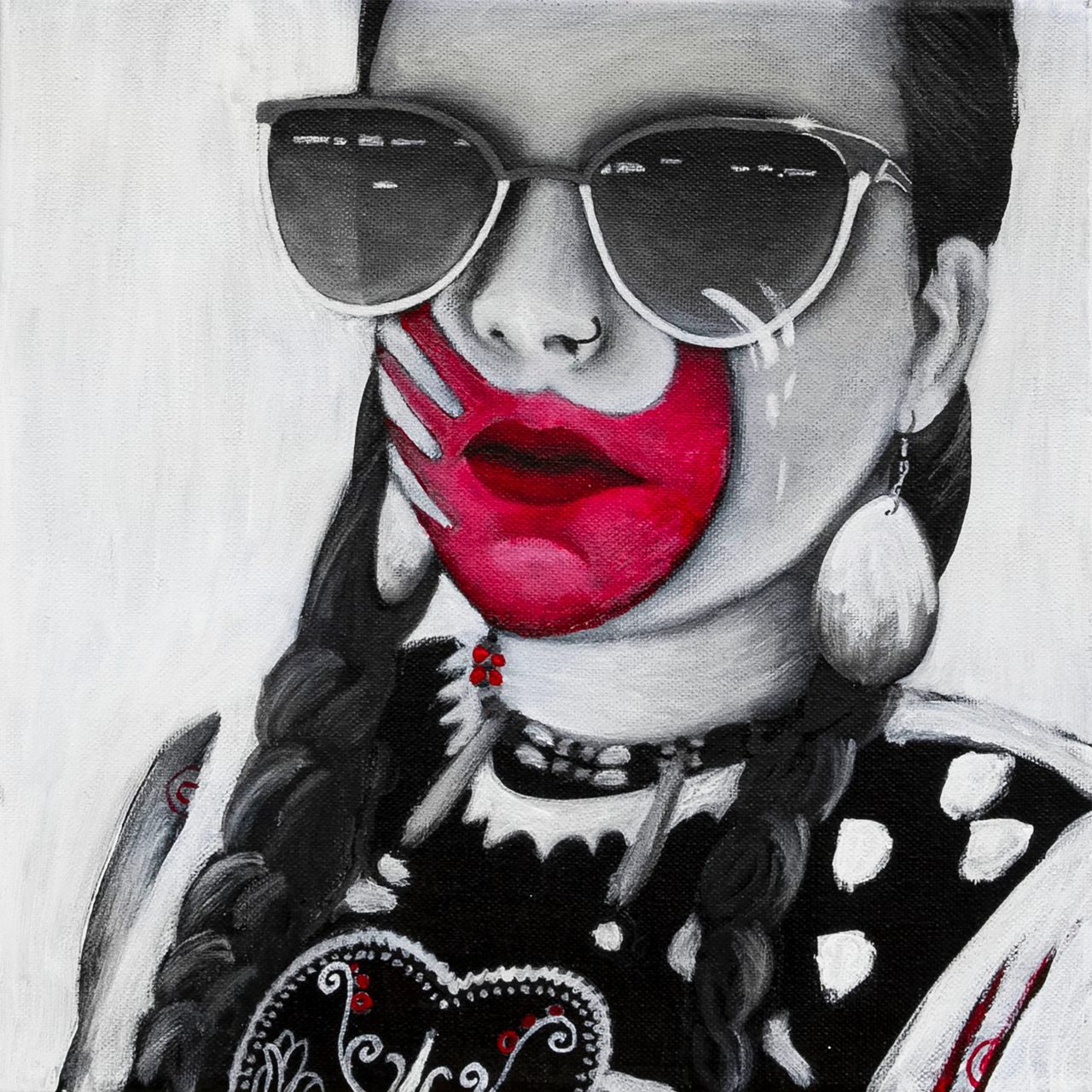 In the week ahead, Indian Country is addressing tradition, identity, and urgent Indigenous issues through passion projects ranging in form from portraiture to documentary film.

Cultural highlights include a deeply moving documentary about the Lenape people of Pennsylvania, a striking show of portraits dedicated to Missing and Murdered Indigenous People, a wonderland of wampum, and a life-spanning look at the work of a revolutionary modern Indigenous artist and academic.

Explore Native News Online’s event guide to strategize your approach to all of the coming week’s artistic opportunities. 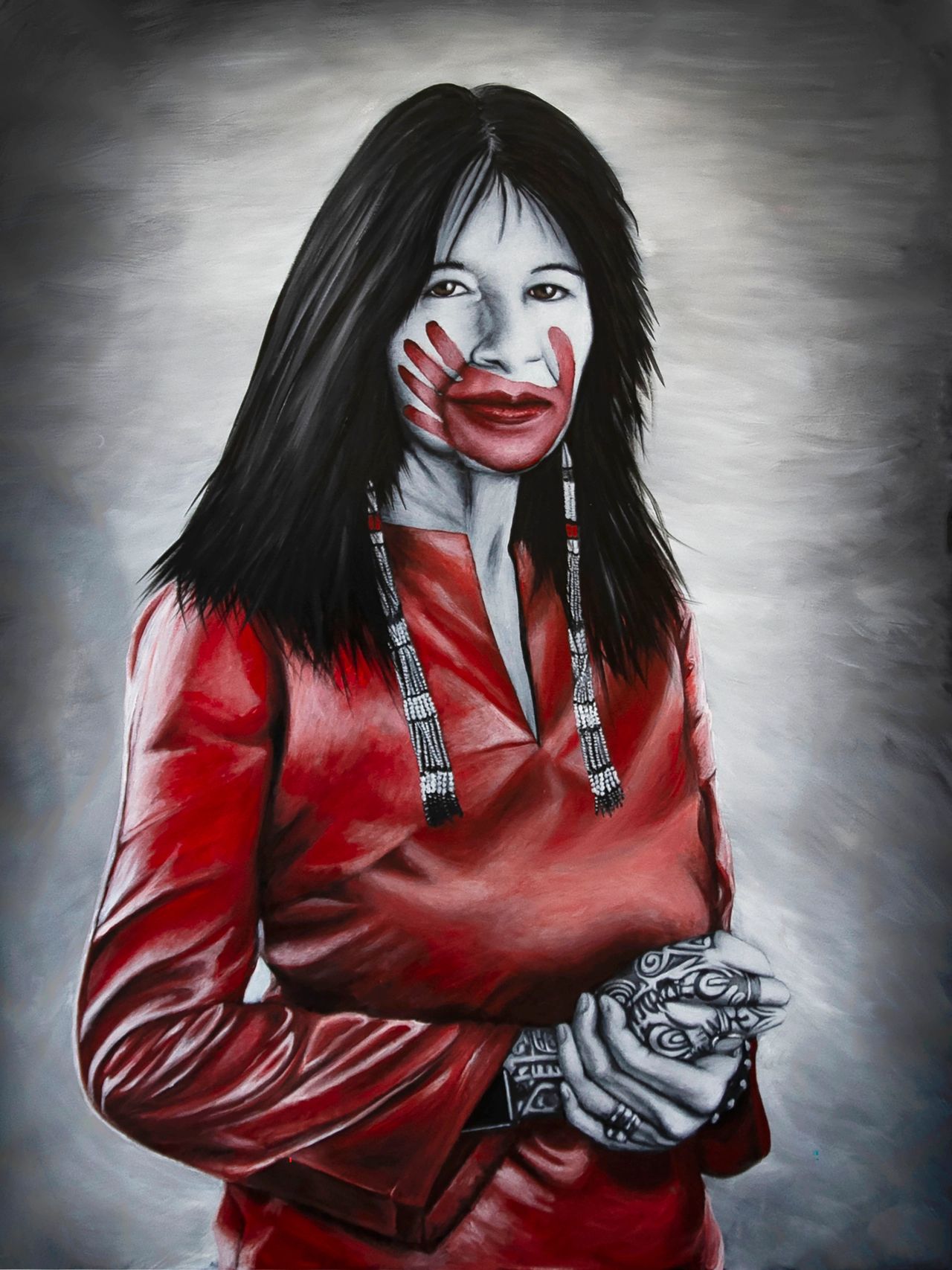 This portrait of Muscogee poet and U.S. Poet Laureate Joy Harjo by artist Nayana LaFond.(Abenaki/Anishinaabe/Mi'kmaq/French/German), is part of LaFond's Missing and Murdered Indigenous Peoples’ Painting Project. A series of portraits from the project will be on display at Five Points Gallery in Torrington, CT. from Friday, April 1 through Thursday, May 7. (Nayana LaFond)On May 5, 2020–The National Day of Awareness for Missing and Murdered Indigenous Women– the Facebook  community Social Distance Powwow was flooded with selfies of Native women with the red hand print that has become the symbol for MMIW over their mouths.

While browsing the Facebook page, artist Nayana LaFond (Anishinaabe, Abenaki, Mi’kmaq, French and German) was moved to paint one particular selfie of a Plains Cree woman from Saskatchewan named Laraina.

“I was quarantined and bored and wanted something to paint,” LaFond told Native News Online. “I'm a survivor myself of domestic violence, so I thought I'll reach out to see if she'll let me paint her and just process my own emotions, and share it to the group.”

Laraina said yes, and LaFond painted and posted the portrait that ended up launching the series “Portraits in Red: Missing and Murdered Indigenous Peoples’ Painting Project.”

Social Distance Powwow members were so entranced by the image that requests for more of LaFond’s custom MMIW portraits started pouring in.

Twenty six of the 77 portraits completed so far will be displayed at Five Points Gallery in Torrington, Conn., with the opening reception this Friday. Several of the portraits have been included in other art shows, but this will be the first exhibit solely dedicated to the project.

The show is not an indication that the project is finished. LaFond says she has a continuous queue of about  30 painting requests waiting to be worked on, and she’s still going strong.

She added that it's important for people to know that she isn’t profiting financially from the project. Her subjects receive their portraits free of charge, and LaFond supplies them with as many prints as they request.

Due to popular demand, LaFond does sell prints through Etsy, with permission from each subject. Originals will also be on sale at the Five Points Show. LaFond said the  money she gets from the portrait sales are used to buy art  supplies to continue the project.

To increase visibility for  the cause and the project, LaFond recruited famous Indigenous role models like runner and activist Rosalie Fish of the Cowlitz Tribe and Muscogee U.S. Poet Laureate Joy Harjo.

“There are three or four people that I reached out to and (Harjo) was one of them. She's someone who I've admired for a very long time, and whose work really touches on MMIW. She's been very vocal about it,” LaFond said. “She immediately said yes, and approved the design. We had a really nice exchange, which was an honor for me.”

The color red is central to the MMIW movement and LaFond’s images, and LaFond explained why she thinks it plays such a primary role.

“It's mainly the color that spirits can see. And it's the color of blood and panic. You associate the color red with something being wrong,” she said. “That’s why it's become the symbol for this awareness.” 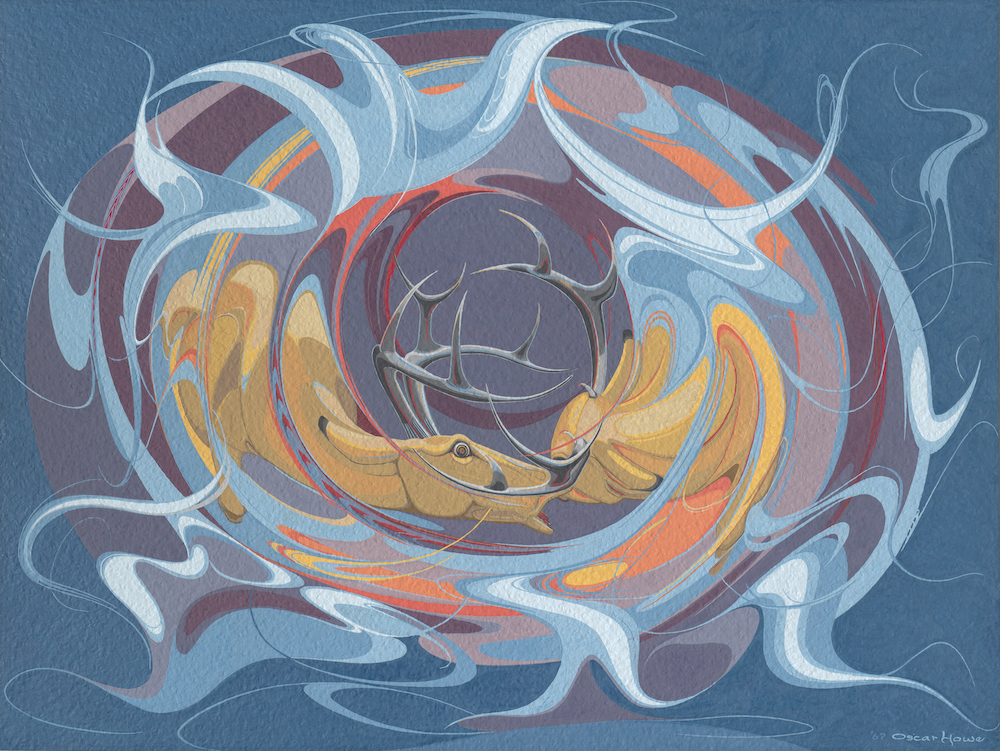 WHEN: Through Sunday, Sept. 11

His abstract, experimental approach to depicting Sioux culture was something totally new and fresh, and it inspired and encouraged Native artists to stop painting  by the rules, resist stereotypes, and embrace their own style and self-expression.

Howe, who was also a renowned art professor at the University of South Dakota, saw no impropriety  or imbalance in combining contemporary methods with Native cultural creativity.

The new exhibition “Dakota Modern: The Art of Oscar Howe” gives  a new generation of Native artists and art enthusiasts a full picture of the artist’s game-changing paintings, perspective,  and passion for innovation and cultural preservation. The show also includes Howe’s early, more conventional work, and traces his creative evolution.

Howe, who was born in 1915 on the Crow Creek Indian Reservation in central South Dakota and died in 1983,  rose to prominence at a time when Native Americans were struggling to be taken seriously in the worlds of art and academics.

The professionalism and dignity he demonstrated under all the social pressure and stereotyping, and his unwavering commitment to his art and the empowerment of Native people, gained him scores of admirers throughout the Native art and activism worlds.

At the University of South Dakota, where Howe used to teach, he is  honored annually through the Oscar Howe Memorial Lecture on American Indian Art.

The 2021 lecturer was delivered by Howe’s former student, Oglala Lakota ledger artist Donald Montileaux, who spoke to Native News Online about Howe in a previous story.

“I've always admired Oscar because of who he was, what he accomplished and his style of art. He was way ahead of his time. That's a true mark of a master artist,” Montileaux said. “People didn't think that Native Americans could teach anything. Had it not been for Oscar and other people strong enough to continue to fight for Native Americans to have an opportunity to showcase themselves, we probably would still be in the same place we were back then. Oscar was everything I wanted to be. I loved the fact that he was an accepted artist in society. And I love the fact that he was a teacher of fine arts, and also a family man.” 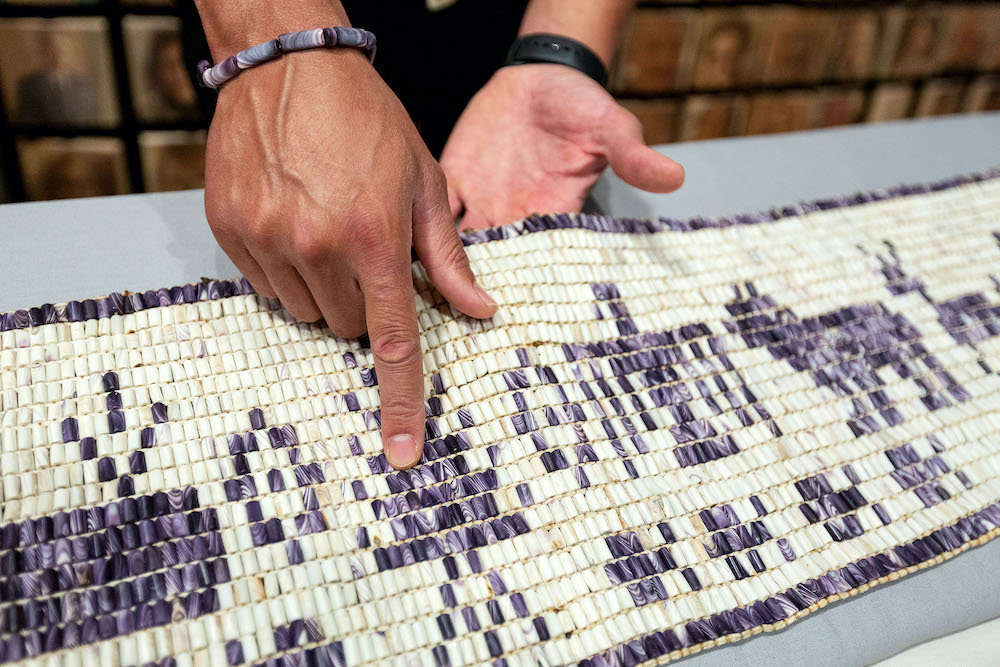 WHEN: Friday, April 8 through Friday, May 6

It’s a wonder of art and nature that the shells of small sea crustaceans can be fashioned into beaded tapestries telling tribal histories; and that is the beauty and ingenuity of the wampum belt.

Northeast woodland tribes like the Wampanoag practiced and perfected the art of grinding purple and white whelk snail and quahog clam shells into beads and transforming  them into wampum belt stories, both before and after the Mayflower hit their shores and colonization commenced.

A new 1000-bead wampum belt made by contemporary Wampanoag artists is the resilient centerpiece of   the exhibition Wampum: Stories from the Shells of North America. The show  comprehensively covers every aspect of the art, while simultaneously telling the story of the Wampanoag people.

The new wampum masterpiece combines the history of the Wampanoag with the tribe’s creative goals for the future.

For those who aren’t as familiar with the artform or have a hazy, preconceived concept of its importance, the belt and the show are a must-see,

“The word ‘wampum’ is often misunderstood and sometimes appropriated by non-Native people,” Curator of Exhibitions Anna Barber, said in a statement. “This exhibition so beautifully examines the deep and enduring relationship the Wampanoag  people have with wampum.” 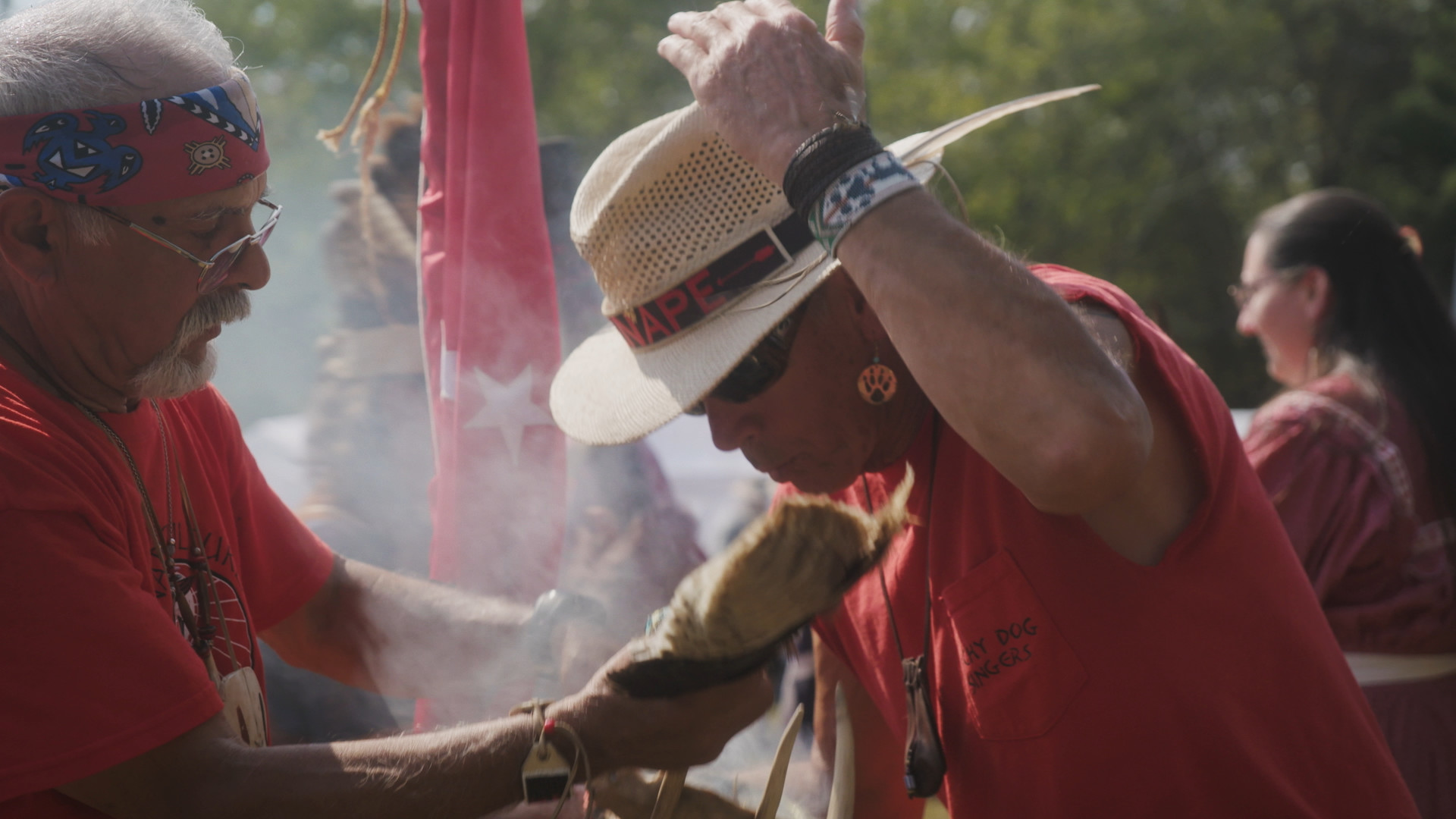 The Fourth Crow Prophecy is a traditional and timely story passed on through generations of the Lenape people of Pennsylvania. In the new documentary, ‘Keepers of the Way,” ceremonial chief and tribal council member Chuck Gentlemoon DeMund, shares  the story in his own words.

“The first crow lived in harmony with nature. (With) the second crow, a great sickness and darkness was let loose on the land and he became ill, and the great sickness that came on the land was encroachment and how we had to change,” DeMund explains. ”The third crow saw that, and he didn’t want any part of it, so he hid out.  And now, the fourth crow is coming back out and he knows the earth needs to be healed again.”

Now, the Lenape, who colonizers unsuccessfully tried to wipe out completely from their homeland in the 1700s, are taking a cue from the fourth crow.

The tribe’s efforts to work through intergenerational trauma and maintain  their identity and relationship with the land, are chronicled in “Keepers of the Way,” which has its world premiere this Friday at the American Documentary and Animation Film Festival in Palm Springs.

The subtle, moving, and beautifully photographed film by upstate New York-based  Topaz Creative, captures the tribe’s unbreakable bonds and dedication to cultural preservation through interviews with tribal leaders including Demund and tribal council member, Elder and cultural chief Ken Macaulay, and an intimate look at a weekend of healing ceremonies held for the 1.2 million acres of land affected by the faulty 1737 Walking Purchase, also known as the Walking Treaty.

The treaty changed Lenape life forever, either forcing tribal members off the land entirely, or driving them into hiding like the third crow.

The documentary’s director Evan Cohen is non-Native, but the film was made in close collaboration with Lenape leaders who took part in every aspect of the project.

“We did not consider this film finished until the Pennsylvania Lenape’s tribal council signed off on the final edit and sent in their acknowledgements,” Cohen said in a statement. “By making this film, I discovered that the best way I could give back to the Lenape is to let them lead with their own story and to do my best sharing their perspectives with audiences who may not have familiarity beyond Western culture’s stereotypes and misinformation. Indigenous people are the true caretakers of the Earth. I feel it’s my responsibility to do right by them, as they continue to do the difficult work of preserving the land and their sacred ways of life.

Keepers of the Way | Trailer from Topaz Creative on Vimeo.