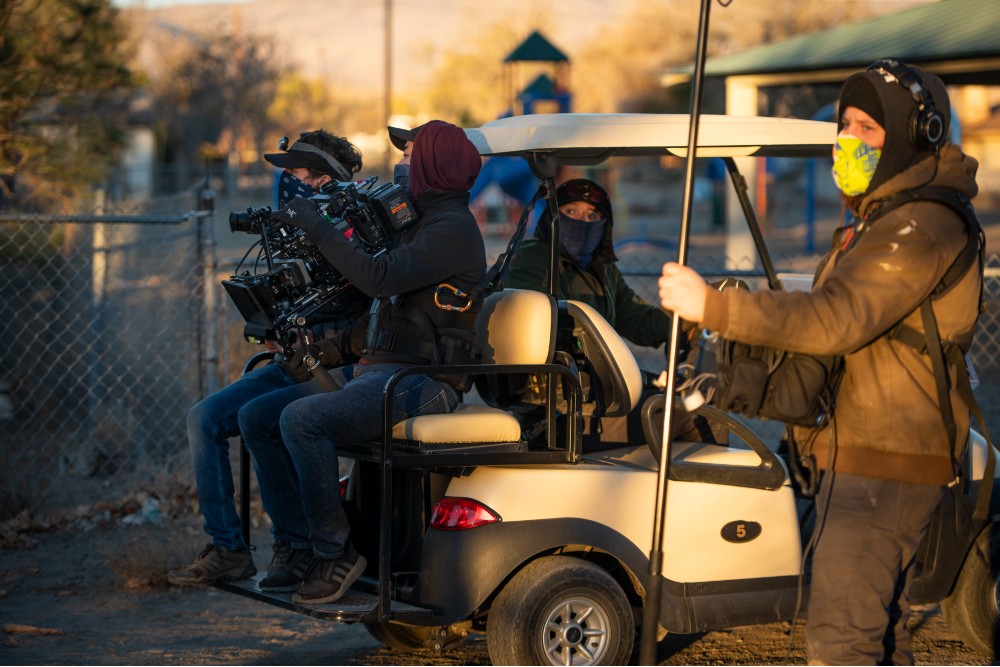 In the first six months of 2022, Vision Maker Media has funded over $1 million to 11 different documentaries through its Public Media Fund, for future television broadcasting.

They have also provided $180,000 through their Creative Shorts Fellowship fund, which supports budding Native filmmakers and mentoships.

“Through the support of many, this year Vision Maker Media is able to offer nearly $1.2 million in direct film funding support to Native filmmakers,” Executive Director Francene Blythe-Lewis (Eastern Cherokee, Sisseton-Wahpeton Dakota and Diné) said in a statement. “The honor is ours, for everyone at Vision Maker Media, to be part of the creation of these important stories.”

Projects Selected for the 2022 Public Media Fund Through Support from the Corporation for Public Broadcasting:

Decolonizing the Plate (Working Title) (funded for $131,000 for Production) A Diné woman follows the story of a Peruvian-born chef who is reconnecting with his Indigenous, culinary roots as she herself seeks to understand the role food plays in her own healing from intergenerational trauma. Natalie Benally (Navajo) from New Mexico, writer/executive producer/host

The Good Relative (Working Title) (funded for $67,613 for Production and Post-Production) “The Good Relative” is the story of Faith Spotted Eagle, an internationally-renowned and revered elder of the Yankton Sioux Tribe in South Dakota, as she confronts the state of South Dakota to protect their tribal water rights — a fight that has continued since her childhood and is the battle of her lifetime. Judith LeBlanc (Caddo) from New York, executive producer

Without Arrows, Long Documentary (86:46) (funded for $150,000 for Production) Delwin Fiddler Jr. left his reservation as a young man to escape a trauma that splintered his family and built a new life in Philadelphia, but thirteen years later he abandons it all and returns home to attempt to heal the past. Elizabeth Day (Leech Lake Band of Ojibwe) from Minnesota, director/producer

CROSSING THE LINE; Episodic (Series) (funded for $91,450 for Production) “Crossing the Line” is a four-part docuseries that will examine the epidemic of violence that exists within towns surrounding the Navajo reservation, identifying and exposing much of the racial tension that exists in these towns and hearing the stories of not only the victims of the violence but also of those who are fighting to make change in these spaces. Ramona D. Emerson (Navajo) from New Mexico, director/writer/co-producer

Boucha (Working Title); Long Documentary (56:46) (funded for $150,000 for Production) “Boucha” is not about winning and losing – on the ice or in the courtroom; it’s about a man uncovering hidden pride for his people and culture. Leya Hale (Dakota, Diné)  from Minnesota, director/producer

Indigenous Genders (Working Title) (funded for $135,800 for Production) “Indigenous Genders” (working title) is a 5-part docuseries exploring the lives of people across the U.S., from various nations, who are challenging gender norms through living their varied and full lives. Raven Two Feathers (Cherokee, Seneca, Cayuga, Comanche) from Washington, producer/director

Whose Land? O'odham Land! (Working Title); Long Documentary (56:46) (funded for $25,000 for Research and Development) “Whose Land? O’odham Land!” (working title) explores the impact of the expansion of the U.S.-Mexico barrier through the personal stories of O’odham peoples in southern Arizona and Sonora, Mexico whose ancestral lands and culture have been harmed by its construction and who are resisting the U.S. government's violations of tribal sovereignty, environmental protections and human rights. Victoria Westover from Arizona, producer/co-director; Mike Wilson (Tohono O’odham Nation), from Arizona, co-director

The Bigger Picture: Frances Densmore and Mountain Chief (1916) (funded for $20,000 for Post-Production) “The Bigger Picture” is a short-form, historical documentary series hosted by historian Vincent Brown that uses iconic photographs to explore key moments in our shared past and the ways in which photographs have shaped our understanding of that past. This intriguing image seems to show a white ethnographer, Frances Densmore, documenting a disappearing culture in a photograph with Blackfoot Piegan Mountain Chief. However, as this episode demonstrates, Mountain Chief was very media savvy and took an active and public role in protecting the rights of and meeting the needs of the people of the Blackfeet Piegan Tribe. Stephanie Carter, executive producer

“Four Nights and a Fire” is a narrative dramatic short. This film revolves around an Ojibwe ceremony performed upon death of a loved one, where the spirit of a recently departed makes a four-day journey to the afterlife and must overcome temptations along the way. This is my interpretation of the spirit’s journey, based on my own experience with grief upon the unexpected loss of my father, and the resilience that I’ve found by following in his footsteps. Fellow/Writer/Director: Alexander Nystrom (Red Cliff Band of Chippewa Indians) from California. Mentor: Amman Abbasi

Glenburn 12WP (funded for $25,000) Roberta, an urban Mohawk woman living in New York City, has her best friend from the rez, Krystal, come to the city. Krystal goes missing and her body is eventually found. Krystal sadly ends up being a MMIW statistic at the hands of a white man. Roberta returns to their regular watering hole to try and figure out what happened. Fellow/Producer/Lead Actor: Tanis Parenteau (Métis Nation of Alberta (Cree) from New York. Mentor: Yvonne Russo (Rosebud Reservation – Lakota)

Lookout 32 (funded for $23,210) “Lookout 32” highlights the importance of Native folklore, superstitions and traditions, and how members of the Native community from different tribes and backgrounds can remain connected to their heritage. Isolated, a firewatcher discovers a terrifying Native American legend. Fellow/Director/Producer/Writer: Littlebear Sanchez (Lipan Apache) from California. Mentor: Nathan Harrison