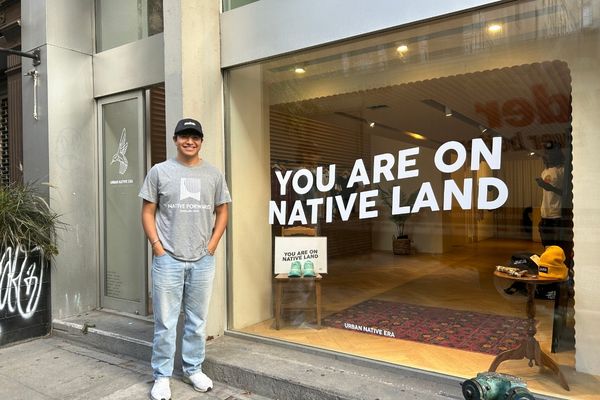 NEW YORK—The all-caps message reads like Los Angeles' iconic Hollywood sign from a distance. It’s the same white font, with lettering set slightly askew, as if the words are printed on one of those advertisement banners pulled behind an airplane, sending a wave of air ripping through them.

The message—YOU ARE ON NATIVE LAND— has become so recognizable throughout Indian Country and beyond, it could be mistaken for the brand itself. Which is why Urban Native Era’s founder and designer, Joey Montoya, (Lipan Apache Band of Texas), chose to feature it on a large decal directly on the window of his SoHo-based pop up store in downtown Manhattan.

“I think it is a special thing to see a Native brand here,” Montoya told Native News Online. “The people who come in, they're really overwhelmed with joy and excitement, and [they] feel seen, especially in a big city like New York.”

The storefront—located at 91 Crosby Street—opened on Indigenous People’s Day, and will remain open until just before Thanksgiving.

During that time window, visitors can purchase Urban Native Era apparel ranging from the famous YOU ARE ON NATIVE LAND “Dad cap”— made popular by Reservation Dog’s Willie Jack— to graphic tees that say the same, to upscale streetwear part of Montoya’s newly released fall collection. Also for sale are smaller accessories, including tote bags, patches and pins, and even beaded earrings made by Montoya’s girlfriend.

Although the 28-year-old fashion designer created his brand a decade ago, he said it’s grown in fits and spurts, but especially over the last few years.

Urban Native Era began as a result of Montoya’s activism. When he was a college student at San Jose State University, Montoya began attending high-profile land and water rights protests and rallies across Indian Country—from Standing Rock in the Dakotas to Idle No More in Canada— and posting about them on social media. As his posts gained traction, he realized there was a real public interest in learning more, and an awareness campaign afoot led by young Indigenous people.

“I was like, ‘How can I really spread the message a little bit more?’” Montoya said. “And then the brand really fell into that.”

What started as a graphic tee brand that operated mostly out of Montoya’s car has since turned into a well-known brand with more than 170,000 Instagram followers, with products featured in film and TV and sold across the United States at the massive outdoor retailer, REI. In May, the Field Museum in Chicago asked Montoya for permission to install his sign as a permanent exhibit in the museum’s atrium, where it remains today.

“It's cool just to have more representation in fashion and in film and TV,” Montoya said. He was contacted by Reservation Dogs’ costume designer last year to feature some of his products in the show. He didn’t know how the products would be styled, or which characters would end up sporting them.

“We’ve gotten new customers through the show,” he said. “Someone actually came in earlier and said, ‘Oh we’ll take the Willie Jack hat.’ He said the design idea came to him in 2018, and was intended as a statement for where he grew up, in San Francisco.

“My idea with ‘You are on Native land’ was: I grew up in San Francisco and usually, being in a city, people don't know the land that they're on,” Montoya said. “I wanted that to be really [geared] towards the cities, but it's a message that goes across. We need to start remembering, acknowledging, and doing more to really upkeep and push that narrative.”

As his California-based company grows, Montoya is making a concentrated effort to keep the company rooted in intention from its messaging down to its production. Urban Native Era is embracing slow fashion with sustainable packaging, integrating recycled materials into some of its wares, and sourcing some of its production in the United States.

Moving forward, Montoya and his small team of two want to focus on what comes after awareness. He’s focused on creating a gathering space to create community, and also restructuring his company’s operation—possibly through the creation of an Indigenous calendar—to prioritize family and community.

“In the future of Urban Native Era, I’m always thinking about how we can bring more people together,” he said. “So we can continue further discussing what we need, what we want, and how we can help each other.”