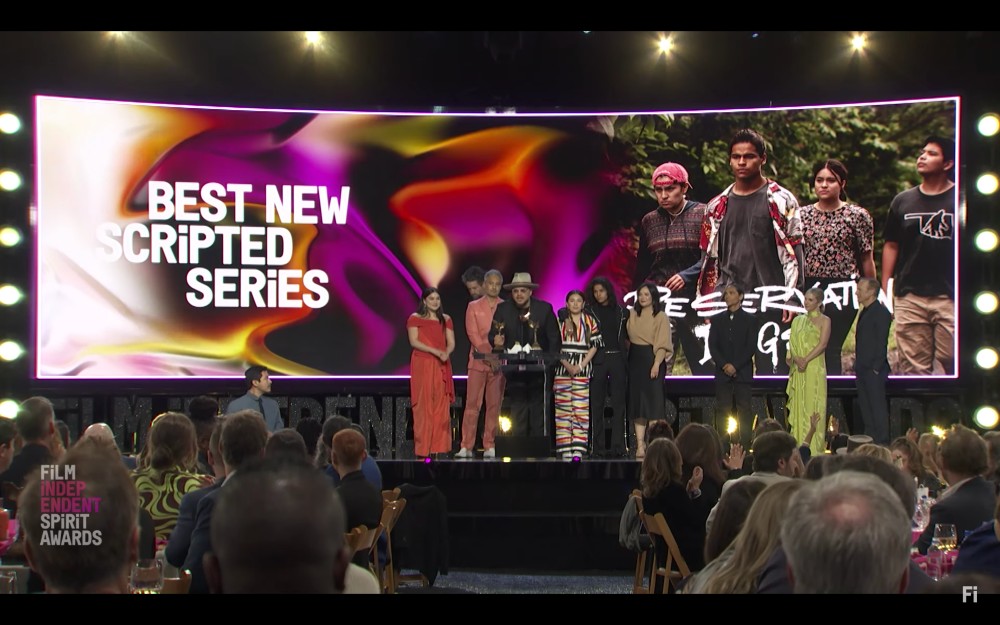 The all Indigneous cast and creators of the Hulu smash hit Reservation Dogs stood and embraced one another last night at the 2022 Film Independent Spirit Award Ceremony for their latest wins: Best Scripted Series and Best Ensemble Cast in a New Scripted Series.

The Film Independent Spirit Awards recognizes the top talent from film and television each year.

Reservation Dogs, written by Sterlin Harjo and Taika Waititi, is a television comedy series that follows four Indigenous teenagers who attempt to get to California by stealing, robbing and saving in rural Oklahoma. Every writer, director and series regular on the show is Indigenous, a first in Hollywood television history. The show streams exclusively on HULU.

“That's why we made this show, because we told stories about home and they were all funny, and there was nothing on TV that was funny that had Natives in it,”  Harjo said in the group’s acceptance speech for best scripted series on Sunday. “And we wanted to show you how funny we are. No one knew we were funny.”

The show’s new accolade will be added to a laundry list of prior recognition. In December, Reservation Dogs received a Golden Globe nomination for “Best Television Series – Musical or Comedy.” They also took home Gotham Awards 2021 Best Shortform Breakthrough Series, and was nominated for the Pena de Prata 2021 Best Comedy Series.

“This prize is so much bigger than just ourselves,” said Jacobs, accepting the Best Ensemble Cast award. “ Each of us come from different nations across Turtle Island who survived 500 years of colonization….All those who came before us working in Hollywood, playing antagonists in Western movies and mythic, stoic, and savage Indians, to Native creators who've had to endure and break down tropes in this industry. We are here accepting this award because of you.”