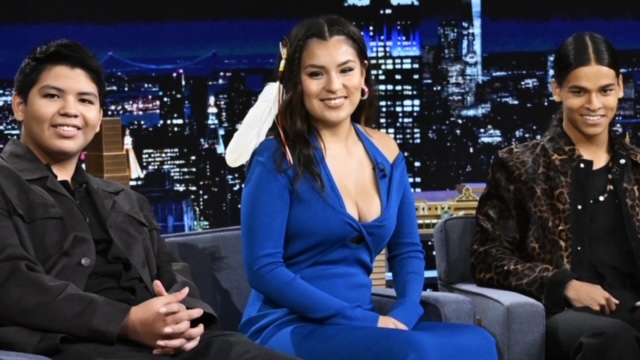 Today marks the premiere of the highly anticipated season two of Reservation Dogs on Hulu.

“That's what I love about the show because we're all basically playing ourselves,” Paulina Alexis told him. “They wanted rez kids, they got rez kids,”.

“It's like my dream show,” Alexis told Good Morning America host Michael Strahan. “Growing up we never had a show to truly authentically call ours, and we didn't have a show [where] I can look at the TV and see myself. Now we’re authentically doing it in our own way.”

“How we started off both season one and two and how we ended it was doing a ceremony,” Woon-A-Tai told Strahan. “We kind of blessed the set, blessed each other, to do it right, and it's the same way we tackled the harder scenes inside the first season. There's a scene that's very dark that we smudged ourselves, smudged it with sage, to cleanse all that bad energy that we got from the set before and after.”

Reservation Dogs centers around four Native kids from a reservation in Oklahoma.

“As the show goes on, they learn just how really special it is and they come to love it and not want to leave at all,” Factor told Fallon on the Tonight Show.

Reservation Dogs represents Natives and their struggles in a modern, realistic, and humorous way. The show has been the recipient of many accolades, including over 80 “best TV” lists, and was nominated for a Peabody Award, a Gotham Award, and a Golden Globe.