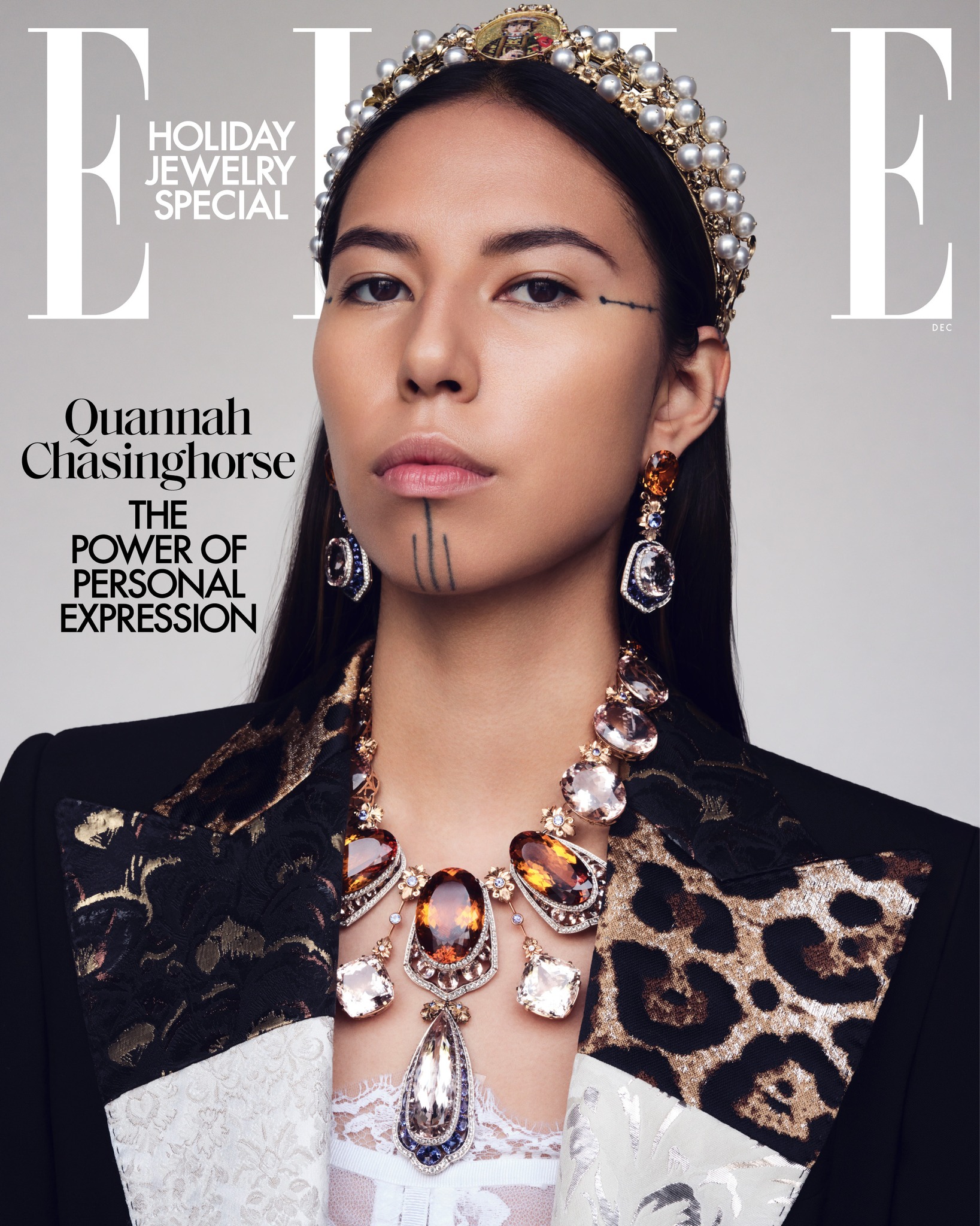 Quannah Chasinghorse, who is Hän Gwich’in and Sicangu Oglala Lakota, looks regal on the recent cover of ELLE magazine. She is iced out in Dolce & Gabbana Alta Gioielleria earrings, necklace and tiara, wearing a black Dolce & Gabbana blazer with a white bustier underneath. Her hand-poked Yidįįłtoo on her chin and around her eyes looks stunning.

This cover comes just seven months after being featured on the cover of Vogue Mexico’s May issue. Over the past year, Chasinghorse has made huge strides in the fashion industry becoming the first Indigneous woman to walk for Chanel. She also attended the 2021 Met Gala and has walked the runway for Chloé, Savage x Fenty, Gabriela Hearst, and Prabal Gurung. So much has happened in just one year.

The 19-year-old model was signed to IMG, a renowned modeling agency, in December of 2020. (IMG has also signed models like Tyra Banks, Kate Moss, and Gisele Bündchen.) This after amassing a large social media following through her activism work, which she is most known for.

As she talks about in both Vogue Mexico and ELLE, being a land protector is one of, if not the, most important part of her life. Coming from a long line of fierce and powerful matriarchs, she is a fourth-generation land protector of her Hän Gwich’in homelands located in what is now called Alaska.

Chasinghorse, and her mother Jody Potts-Joseph have been strong advocates for protecting the Arctic National Wildlife Refuge home to 200,000 porcupine caribou that could be threatened by the ongoing oil and gas development.

In her ELLE interview with Indigenous author Terese Marie Mailhot, Chasinghorse describes a tear-jerking moment where a herd of caribou surrounded the truck her family was using to transport her late uncle to his final resting place in their home village. That night her family got three caribou and it was Chasinghorse’s first one, a rite of passage for a Hän Gwich’in woman and practice she is reclaiming. She was honored to be able to feed her village.

During the 45th presidential administration, the 1.57 million acres of refuge were opened up to allow oil and gas companies to begin drilling — this in an area that has become known as ground-zero for climate change, where temperatures are rising at double the rate as anywhere else in the country. The melting ice caps are pushing Indigenous communities in Alaska further inland. Bringing awareness to climate change and ushering in change to help save her homelands is the focus of her work.

But it doesn’t stop there. She is also reclaiming parts of her culture that were demonized and banned by Christian missionaries. At 14, she received her first Yidįįłtoo. It was three hand-poked vertical lines that went down her chin and was done by her mother Jody to mark her passage in womanhood. The Yidįįłtoo is usually done between the ages of 12 and 14.

In a personal poem she shared with Teen Vogue in September 2020, Chasinghorse read, “I’m from the beaded moose hide in modern clothes, from the smell of sage and taste of fry bread. I am from the fireweed trails. From the birch trees I used to climb, whose limbs I remember as though they were my own. I’m from the mushing, hunting, fishing, and berry picking trips, from the family of traditions. I'm from the potlatches and the legends our elders tell.”

This is why she has become so embraced and celebrated by Indigenous people from across the US. She is proudly Indigenous in every space she occupies, whether it’s wearing turquoise to the Met Gala or sharing the rich history of Yidįįłtoo or speaking on climate change that so deeply impacts her community. Chasinghorse brings her whole being, history and people wherever she goes.