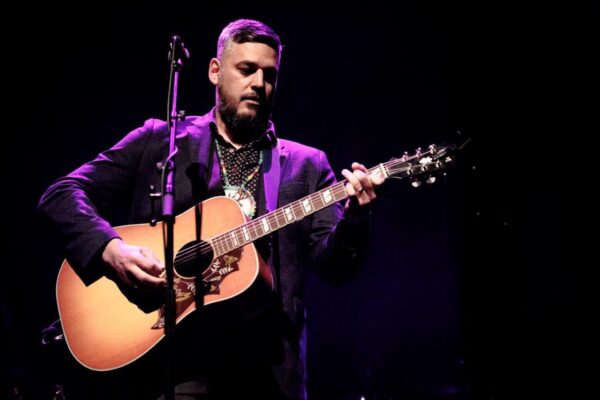 For the past decade, Adrian Sutherland (Attawapiskat First Nation) has kept busy looking forward, steadily releasing new music that echoes what life is like on the coast of James Bay in remote Northern Canada.   Along with his band, Midnight Shine, he’s dropped three impressive records, but now he’s looking back to his sonic roots: the 2013 self-titled debut album.

The record will be reissued and available June 30, along with extras and a fresh, revamped sound. Each track has been remastered and features a new accompanying lyric video. At the end of the month, Sutherland will also perform live acoustic versions (one track a week) from his home in Attawapiskat. “My music is about who I am and where I come from,” Sutherland said. “I've always wanted to share about my life through music, and my first album has many songs worth revisiting, especially in the context of today’s uncertain world. With everything going on around us, this seems like a good time to get back to the basics of a more simple life, and some of the universal themes reflected in my early music.”

Looking back at the tracklist, the LP kicks off with “James Bay,” an homage to Sutherland’s remote home region in Northern Ontario, while “Mooshum” honors the memory of his grandfather. From there, “Indian In Disguise” makes a powerful statement about losing one’s identity and “Save My Life” reveals the darkness that comes with addiction – a struggle that Sutherland (now sober 20 years) has known firsthand. “Everybody has a story to share, and I think it's important for First Nations people to shed positive light on our culture and values,” he said. “That’s what I hope to do with my music." 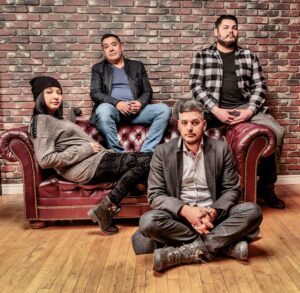 The album indeed digs deep into his backstory and tells listeners about his life, but Native News Online decided to catch up with Sutherland, the founder, front man and lead vocalist/guitarist of Midnight Shine, to see if we could find out a bit more. Here’s what he had to say.

What are you up to these days, now that you’re unable to perform live concerts?

I’ve been mostly staying home in Attawapiskat, or near home. I spent lots of time in the bush, preparing for this year’s spring goose hunt with my family. I hear you when you say no one has been able to perform live concerts, other than online stuff. It’s a weird time for sure, but not so much for me, especially during the spring months where I’m usually taking a break from music to pursue cultural activities. I’m only just now beginning to shift gears back into music and, so far, I’ve gotten some new ideas and have been preparing our first album for re-release. That will be happening soon.  How has it been prepping the upcoming re-issue of your debut album? It’s been pretty special to revisit this album. These are some of the songs that mean the most to me, and that I’m most proud to share. The fans who have been with us from the beginning, they already know and love Midnight Shine’s early songs and we’re sure they’ll enjoy the remastered versions – they sound amazing! For new fans, releasing these songs again will bring new attention to the music that laid the early groundwork for the band.

Looking back, how would you describe growing up in Attawapiskat to someone who's never been there before?

It was an interesting upbringing, also very tough growing up here. We never had access to things like clean water, adequate housing, and  we have a lot of social problems. The flip side is that there is a whole culture to learn about and huge landscapes to explore.

How is Attawapiskat inspiring your music today? Also, what challenges are Attawapiskat still facing at the moment?

There have been a lot of negative experiences and I’ve used music to find a way through some of those things. But also, the positive side of life here has helped me write music. My songs have mostly been about resilience, love, family, culture and the land. Some of the major issues we are facing here today are poor governance, water, housing, drug addictions and suicide.

I hear there’s a family connection behind your song “Sister Love,” is that true?

My sister Iris wrote a poem, I asked her if I could use it for a song and then it became the basis for “Sister Love.” It’s about certain memories and emotions from when life was a lot less complicated, and how sometimes we wish we could be back in those better times.

What songwriter/band has been the most influential on you, but also, what is your own songwriting process?

I’d have to say Gord Downie, especially the legacy work. His departure left me wanting to do something more. As for myself, I usually get lyric ideas or set the mood with some chords strummed on the guitar or played on piano. Like most songwriters, I get my initial ideas down and then begin to build around the ideas.

I hear you spent time working as an E.M.T, what led you in that direction? Have you had any other jobs throughout the years?

I spent 10 years as an E.M.T and got to meet some real special people over the years. While I was working outside one day in the summer, I heard what sounded like a gunshot not too far away and soon screaming rang through the air. As I quickly went to investigate, it turns out a young girl was shot in the face close blank with a shotgun by accident. I had some experience working in a hospital and applied my training. I believe she might have died if I was not present. It was a very intense experience and when it was all over I was covered in her blood. The hospital said if I hadn’t done what I did that she may not have made it. The paramedic supervisor at the time asked if I was interested in becoming a paramedic, so I thought about it for a while and said “yes.” I’ve also spent some time in mining and business development. Now, I own a small business with my wife and, of course, I’m in the music business.  Aside from music, what are you up to on an average day, and what do you have coming up in the future?

I like being on the land, spending time with my family, playing hockey, land-based teaching and fitness. Beyond that, there is a lot on the horizon with my first solo project. It’s also coming up to Midnight Shine’s 10-year anniversary in 2021, so we’re hoping to have a big year next year. I look forward to getting more music out to our fans and to the rest of the world. Listen on to Adrian Sutherland and Midnight Shine on YouTube: