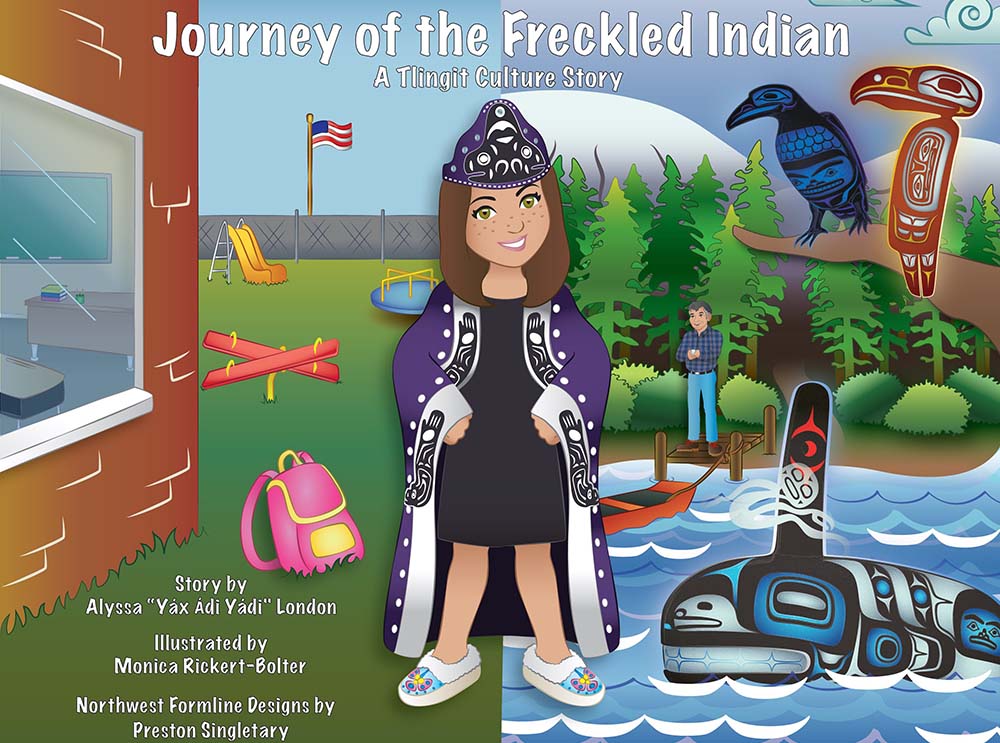 On the cover of “Journey of the Freckled Indian” the young heroine of mixed-heritage stands proud in purple Tlingit regalia swirling with traditional formline design.

But Freckles wasn’t always such a confident culture-bearer. Getting to a place where both sides of her background are in balance took pain, travel, patience, and an underwater epiphany with the wise Killer Whale.

Freckles’ story, which encourages kids to explore all the facets of their identity, loosely mirrors that of its author, former Miss Alaska USA Alyssa London, who is of Tlingit, Czech and Norwegian descent. 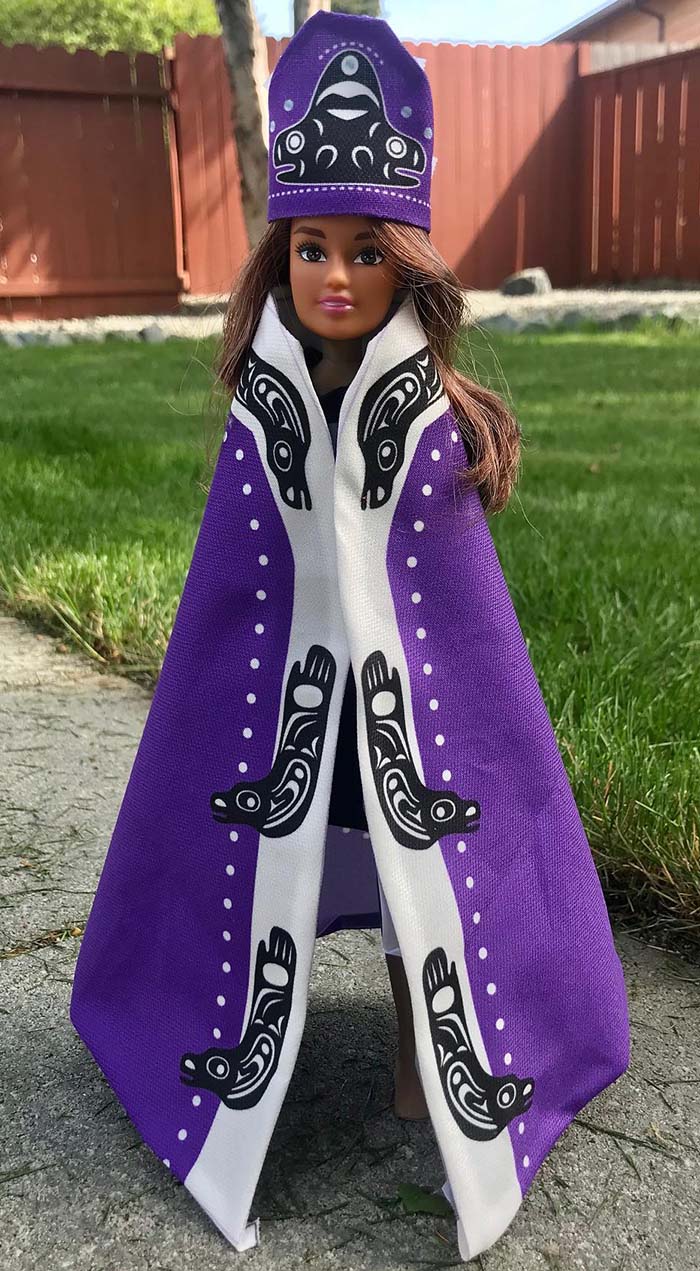 A doll of Freckles, the mixed-heritage heroine of "Journey of the Freckled Indian." (Culture Story) It’s the debut children’s book from London’s media and education company Culture Story, and there is also an accompanying doll of Freckles in her regalia available for purchase.

“We're in a mixed world. And so the book strives to validate people who are part Native and also strives to make them think about what their identity is and what it means to be mixed, or to carry on tradition, or to ask about their ancestry,” said London, who graduated from Stanford University in 2012. “I've gotten to read it in person to one school. I hope to be able to go on Zoom and visit lots of schools because I think a message of having strength in your identity as a foundation for confidence as you grow up and go out into the world is really important to impart to children in the K-6 space.”

“I put together a team of people that really get it,” London said. “Monica just totally understood the purpose of all of these themes and just gets it intrinsically because she's mixed Native, and Preston is also mixed Native American.

“When Miss Alaska asks you to do something, you just do it. She's a force to be reckoned with,” said Singletary, who has work in art museums throughout the country, including the Seattle Art Museum and the Museum of Fine Arts in Boston. “Alyssa wanted to have some element of traditional design work in the book, and I never had worked on a project like that, so it was kind of interesting to try my hand at it, and collaborate with Monica.”

Before London asked Singletary to jump on board the project, the two were already a winning combination.

In 2017, Singletary created the killer whale formline design decorating the red and black robe London dazzled with at the Miss USA pageant, adding a dash of Tlingit high fashion to the proceedings.

London didn’t have a prior relationship with Rickert-Bolter. She found out about her at the Reservation Economic Summit, where London ended up chatting about the book with Rickert-Bolter’s father, who suggested London contact his daughter.

“After connecting with Alyssa, and speaking on the phone, and her telling me a little bit more about the project, I kept getting more and more excited. I had worked in Chicago Public Schools with the Title IX  program, the Indian Education Act. I was in charge of doing a lot of the cultural resources, like books and activities for families and teachers,” Rickert-Bolter said. “I noticed that there weren't any books particularly focused on mixed identities. So I was like, you know what, maybe we should have more books like that out there. And when the opportunity arose, I jumped on it. I said yes, absolutely.”

Early on, Rickert-Bolter’s flair for drawing emotion-evoking faces was evident. Early in the book, at a loss for words, with shame, shock and confusion in her eyes, Freckles is bullied by mean girls and boys at recess. She doesn’t look “Indian” enough for their preconceived notions. How can an Indian have freckles? 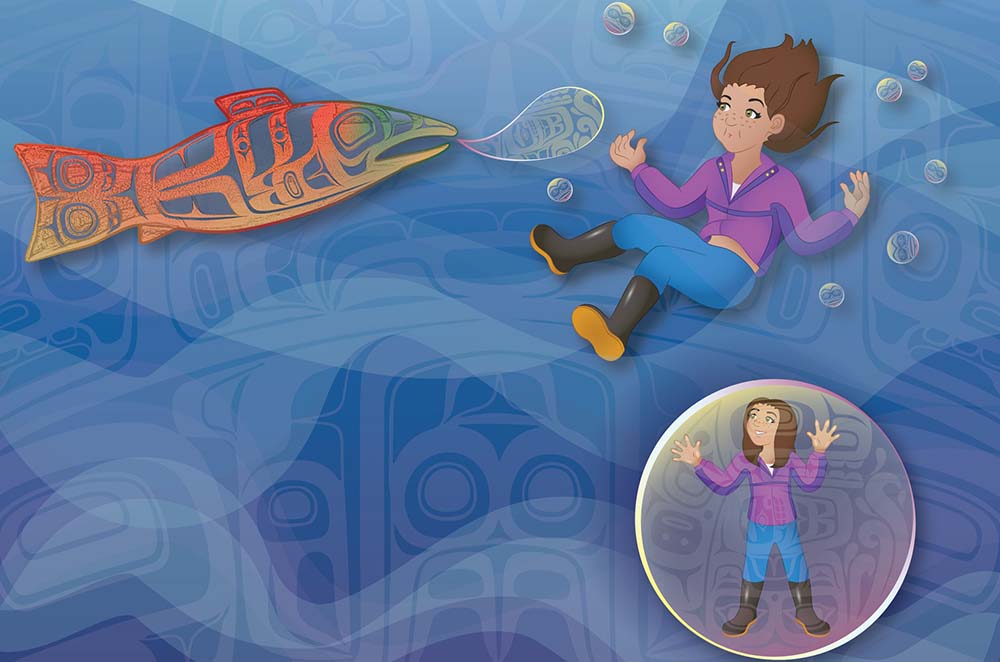 A scene from the new children’s book "Journey of the Freckled Indian: A Tlingit Culture Story," written by Alyssa London with illustrations and art from Monica Rickert-Bolter and Preston Singletary.

This depiction of the audacity of people second-guessing, harassing and humiliating mixed heritage folks deftly sets up London’s lessons.

Technically geared toward second to fourth graders, the book could teach readers of any age about urgent issues facing folks of mixed Native heritage.

It’s the rare children’s book that tackles something as controversial as blood quantum: a law imposed by colonists that defines a Native person by their percentage of “Indian blood.”

One must have a certain percentage — most commonly 25 percent — to be officially recognized as Indigenous and entitled to whatever benefits that entails. Once an Indigenous person’s blood percentage falls below the determined percentage, they are no longer Native in the eyes of the law.

London, who considers a sense of community and cultural knowledge and appreciation far more essential to identity than measures of bodily fluids, hits blood quantum head-on in the book’s introduction, succinctly explaining the concept and its haunting implications.

“It’s this thing that the government made up so that they could predictably extinguish a race of people after just a few generations, people who are Native get questioned based on their blood quantum,” London said. “I wanted the story to bring up those tough conversations around blood quantum and what it means to be an Indian today, because you live in two worlds. That's why the cover has this split imagery.”

With one moccasined foot in her familiar all-American yard in the lower 48, and the other in her ancestral Tlingit homeland of Ketchikan, Alaska, Freckles is already inspiring kids to embrace their identities, judging from reactions during London’s classroom readings and Q&A session at Herbert Hutchens Elementary in Valdez, Alaska in September.

“The older kids, when you get into question and answer, they stop asking questions and they all start just telling you what they are, which I actually encouraged because that's kind of the point,” London said. “And then I say, ‘Okay now go home and ask your elders, your parents, grandparents, aunties, uncles, or anyone you have access to in your family, about your culture.’ Now at my age, I lost my grandpa, and there's sadness around that. I can't ask those questions anymore. So I want kids to ask them while they still can.”

Fortunately for Freckles, it’s not too late to ask those crucial questions.

Her grandpa is still alive and kicking in the southeast Alaska village of Ketchikan, where Freckles’ concerned parents send her to be surrounded by Tlingit culture and bond with the kind and knowledgeable elder.

When Freckles and her grandpa explore Ketchikan, the combined talents of Singletary and Rickert-Bolter reach a glorious peak in gorgeous scenes flowing with joy and formline, the ovoid-based defining style of the Tlingit, Haida and Tsimshian Tribes.

“The whole idea was to slowly introduce this formline design work as Freckles becomes more and more aware of her culture,” Singletary said. “You see it throughout the book, and it starts to become more prominent.”

London wanted formline to be a main motif, and in the Ketchikan scenes it’s just a natural element of the environment. All of the fish, fowl and giant sea mammals are fully formline creatures.

Freckles marvels at a clear river filled with glowing green and golden formline salmon, takes in the sight of Preston Singletary totem poles at Ketchikan’s Saxman Park, runs free in the forest under the eyes of quarreling Eagle and Raven, and faces the powerful, truth-telling Killer Whale while she’s trapped in a bubble underwater. 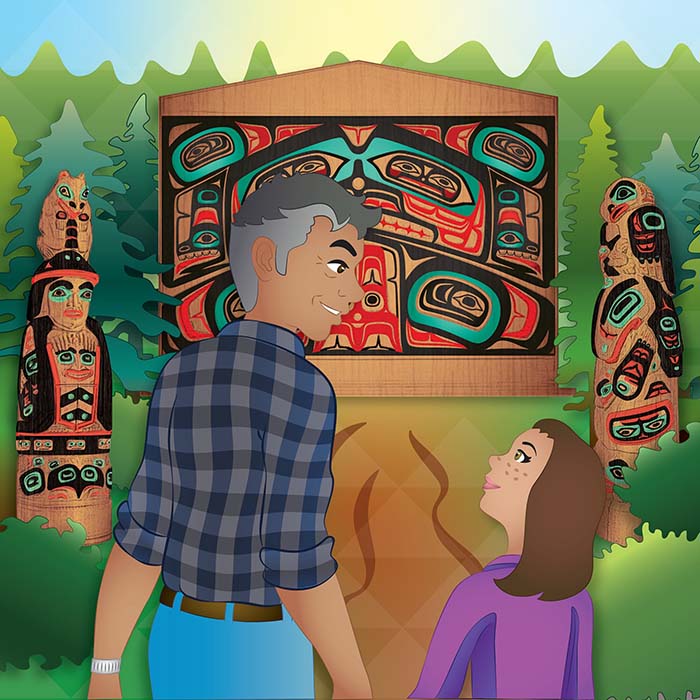 Freckles and her grandfather visit Saxman Totem Park in Ketchikan, Alaska, in a scene from the new children’s book "Journey of the Freckled Indian: A Tlingit Culture Story," written by Alyssa London with illustrations and art from Monica Rickert-Bolter and Preston Singletary.

All of the book’s formline animals, overlays, backgrounds and details were adapted directly from Singleton’s pre-existing work. For instance, Raven, Eagle and Killer Whale all exist as three-dimensional glass sculptures.

There is a purpose behind integrating those particular animals into the story, and a reason why they figure so prominently in Singletary’s work in general.

“Eagle and Raven are the central figures in Tlingit culture,” London said. “Our clans are either Eagle or Raven and then there are your sub-clans or moieties; you can be Raven, Dog, Salmon, Eagle, or Killer Whale. Preston and I are both Killer Whale. That's why Killer Whale is the animal that really grounds Freckles and makes her finally have that epiphany, ‘I just am who I am.’”

The trick of translating glass onto paper fell to Rickert-Bolter. Singletary supplied multiple images of the sculptures and she manipulated, scaled and adjusted them with Adobe Illustrator, and the two artists discussed and experimented with ways to best blend their respective styles.

“I basically had to learn a whole new art form,” said Rickert-Bolter, who added that working the images into illustrations took tons of trial and error before getting it right. “I was able to trace Preston's patterns into Illustrator so they could be scaled to any size, and able to repeat certain things in different areas. I really love how the river scene came out, with the salmon jumping out, and a bear in the background… I'm very hopeful that there will be a next book, because I love how this came alive.”

If London’s vision is fully realized, there will be an entire book series with a universe of mixed heritage characters going through their own culture quests.

“I want Freckles to go on and meet other people of interesting cultures and backgrounds,” London said. “This was her story. And now that she has confidence, she can go off and start bearing witness or helping someone else along their journey. And then we, as the readers, get to enjoy following her along on that journey.”

“The Journey of the Freckled Indian: A Tlingit Culture Story” is available on amazon.com.