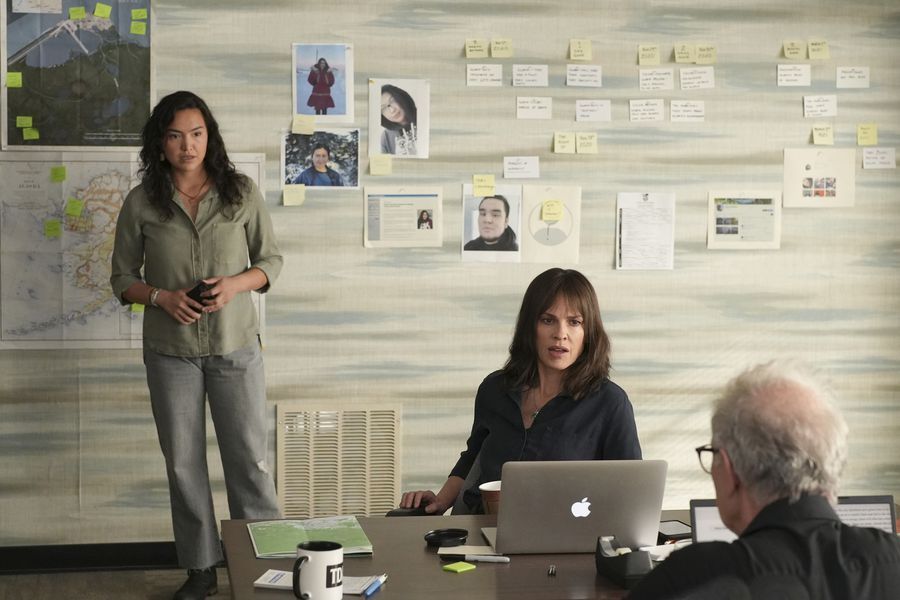 Tonight, a new network television series that centers on the inner workings of a scrappy Alaskan newsroom tackling complex Indigenous storylines will premiere on ABC at 10 pm ET.

Alaska ranks fourth in the nation for the highest number of MMIW cases—behind New Mexico, Washington and Arizona—according to a 2017 Urban Indian Health Institute study. In 2016, there were more than 5,000 reports of missing American Indian and Alaska Native women and girls, but the US Department of Justice’s federal missing persons database only documented 116.

“It’s time to bring the truth to light,” Swank wrote on Instagram on Sept. 14, promoting the show.

“This has been a lifetime in the making and I am so honoured to be a part of a very important story,” Dove wrote on Instagram leading up to the premiere. “Bringing awareness to #MMIW on network television.”

The show was created by Tom McCarthy, who co-wrote and directed the Academy Award winning film Spotlight about the Boston Globe’s investigation of sexual abuse by members of the Catholic Curch.

In a recent interview with ABC, McCarthy said that he wasn’t able to explore the personal lives of journalists in Spotlight, where the focus was on “procedural” aspects of journalism.

“So I thought, man, what’s something I could do if I had an opportunity to make a TV show,” McCarthy said. “And I thought, wouldn’t it be interesting to really get to know who are these journalists, specifically involved in local journalism. … Can I humanize journalists? Can I get a sense of who they are and what makes them tick and why they do the work they do?”

The show was loosely inspired by a series produced by the Anchorage Daily News, Lawless, a two year investigation into the failures of the criminal-justice system in primarily Alaska Native communities across the state. The series won a Pulitzer Prize for Public Service in 2020. The series’ writer, Kyle Hopkins, worked as an executive producer on the show.

In addition to Native representation on real-life issues, the show was also created in part by two Alaska Native writers, Andrew Okpeaha MacLean (Iñupiaq) and Vera Starbard (Tlingit/Dena’ina Athabascan). MacLean is a filmmaker whose debut film On the Ice premiered at Sundance in 2011 and won various awards. He’s now based in New York City teaching film at New York University’s Tisch. Starbard worked as a writer on PBS Kids animated children’s program with Alaska Native characters, Molly of Denali. She’s also worked as a journalist in Alaska for 20 years, currently serving as the editor to First Alaskans Magazine since 2013.

In an interview with KTOO radio , the two said that perhaps the most difficult part of their job was closing the learning curve on Alaska, Alaska Native history, and a sense of place to the dozen other writers they worked with over the past four and a half months in New York City.

“My dad and my uncle were unofficial parts of the writing room with how much I leaned on them,” Starbard said in the KTOO interview. Additionally, Starbard said it’s refreshing to see realistic issues that plague Alaskan Native communities represented on network television.

"I hope that people will be introduced to the issue—whether its Missing and Murdered Indigenous Women or it’s forced boarding schools—as most people I don’t think know about it across the country. That in itself is a good thing. People who are aware of it, I hope it will bring them [a look into] foundational reasons for why these things happen, as well as the excellence and the joy and the beauty of living in Alaska, as well.”