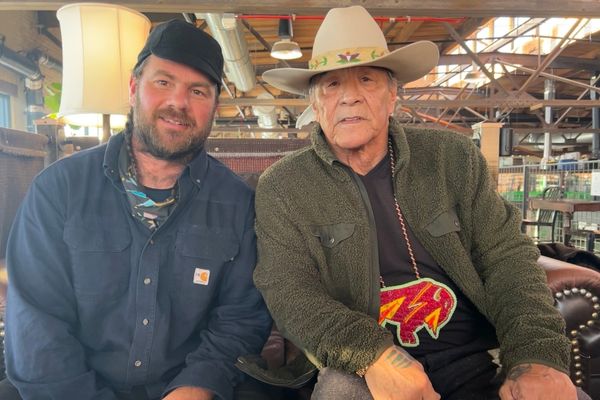 “The only thing I could think about winning was the Native American Music Awards,” said Tom Strong Buffalo to Native News Online.

Now 76, Strong Buffalo is one-half of the duo that makes up the now award-winning group Buffalo Weavers. He and Ben Weaver formed the group several years ago at a performance in Morris, Minnesota. Weaver plays banjo and guitar and Strong Buffalo reads poetry.

“Our style of music is our own and, together, we are poets,” Strong Buffalo says of their music. “We strive to address issues that are going on today: the climate, the earth, and life.”

Strong Buffalo is an enrolled citizen of the Sisseton Wahpeton Dakota and a decorated Vietnam veteran. He has been writing poetry since his service in Vietnam and has been awarded various fellowships for his poetry and leadership. In one of his fellowships, he founded Oyate Hotanin, a nonprofit Indigenous arts organization based in Saint Paul, Minn.

Strong Buffalo has performed with Santee Dakota poet John Trudell, Oneida comedian Charlie Hill, and Dakota actor and musician Floyd Red Crow Westerman — all who, he says, shaped his career and his message.

“I was always the guy who opened up with one poem, and if I was lucky, they gave me $25,” Strong Buffalo said.

Ben Weaver, 43, is a songwriter and poet and directs the musical arrangements for Buffalo Weavers. Their duo’s performances often include a variety of other musical instruments that, when combined, sounds a lot like Americana music, said Weaver.

Weaver has released nine studio albums and has spent 20 years touring the world as a musician. In addition to his music, Weaver is a climate activist and travels by bicycle and pack raft. He uses his music to strengthen relationships between human beings and ecosystems. In 2018 he embarked on a project called Music For Free, riding more than 3000 miles from Canada to Mexico along the Great Divide Mountain Bike Route with his guitar and banjo with performances on the route.

Additionally, Weaver was the first to ride a fat tire bicycle in the John Beargrease Dog Sled Race, a 400-mile dog sled marathon from Two Harbors to Grand Portage, Minnesota. The race is named after John Beargrease, an Ojibwe man from Grand Portage that ran a mail route from 1879 to 1899 and is the longest dog sled race in the lower 48 states.

Strong Buffalonotes that the duo — a young white and a senior-aged Native man — by nature draws curiosity.

“We’re not trying to be the Lone Ranger and Tonto,” Strong Buffalo said. “It just happens to be that he’s white and I’m Native.”

From delivering letters along the historical trail of John Beargrease and performing concerts in old-growth forests in Montana, Buffalo Weavers’ message promotes the healing of the earth — and garnering a NAMA is confirmation that the message is being heard.

“I think at this time, the combination of words and sounds, it’s starting to hit people’s hearts, minds, and souls, and if you can do that, that’s more success than any kind of fame or richness,” Strong Buffalo said. “I’m a 76-year-old great-grandfather, and I’m happy to win anything at my age.”

Buffalo Weavers anticipate recording their third studio album in February 2023, with hopes to make it again to the Native American Music Awards.