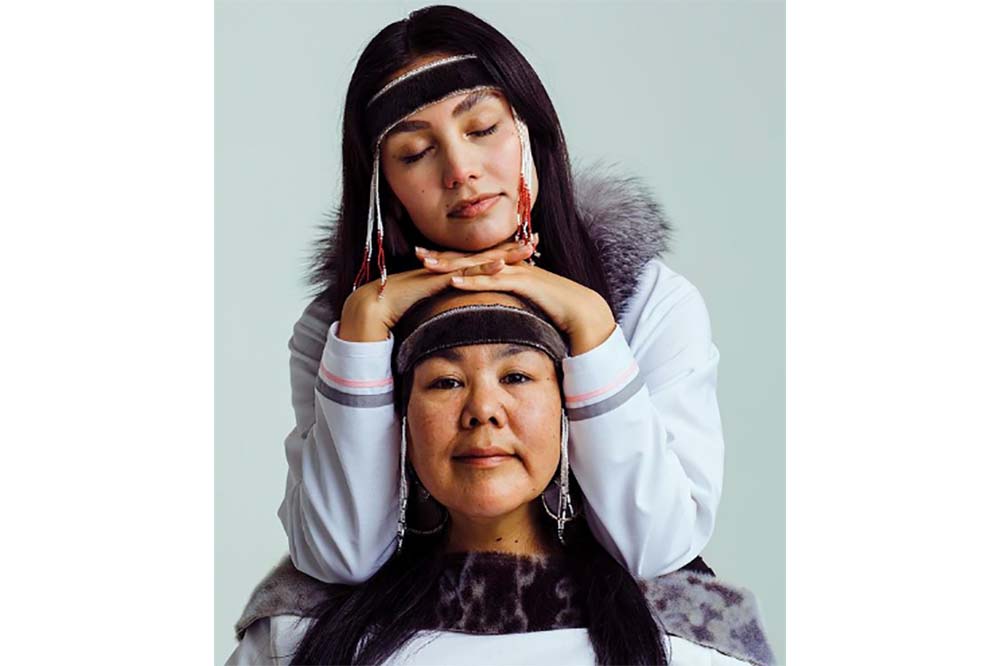 MONTREAL — When 22-year-old Shina Novalinga (Inuk) and her mother sing together, the two women face each other, clutching one another’s forearms, omitting an identical sound from deep in their throat that–when heard together—can mimic the sound of birds, the wind, the river, or even a puppy.

The pair are throat singers, a traditional practice that was typically done to pass time for Inuit women when men were away hunting. Novalinga began learning the art form from her mother over the pandemic, recording videos of her progress and posting them to Tik Tok and Instagram. In just over a year, she has garnered 2.3 million followers.

“I love reading comments that are like, ‘Oh yeah, Shina’s making a higher pitch and her mother's doing a lower one,” Novalinga told Native News Online. Over ZOOM, she’s wearing her own creation of seal-skin earrings and a silapaaq, or a traditional Inuit top made of fabric with seal skin embellishment, hand-made by Nunavik artist Winifred Nungak. “We're making the exact same sound, we’re making this new sound, and people are always confused.”

Novalinga, who has lived in Montreal with her mother and four sisters most of her life, is intimately connected to the art of throat singing: her mother is one of the few culture bearers that kept it alive after missionaries tried to remove it from Native culture.

In the early 20th century, throat singing was banned by Christian missionaries that entered Canadian Arctic communities because the outsiders thought the music sounded satanic. Since throat singing is an artform that is passed down orally, the number of Indigenous throat singers saw a significant decline once missionaries arrived. But in the 80s, in the small village of Puvirnituq—more than 1,000 miles north of Quebec in the Canadian Arctic—a respected Inuk elder asked five professional throat singers to teach the next generation, including Novalinga’s mother Caroline Novalinga.

“I always feel like I'm being taught by a professional throat singer just because she was taught by an elder who knew how to throat sing,” she said. “My mother has always taught me to throat sing with my heart and it’s so much more meaningful when you are invested in wanting to learn.”

Since it’s revival, the Canadian province of Quebec in 2014 gave throat singing cultural heritage status. The designation—the first of its kind for an “intangible” artifact, ensures legal protection.

Novalinga—who is Inuk on her mother’s side and Quebecoise on her father’s—said reconnecting with her culture over this past year was initially hard. “I felt like I wasn't indigenous enough or Inuk enough,” she said. “But that’s now how you should think of it. I was raised by my mother (who) did speak our language and practice our culture, but I only started taking it more seriously recently when I started learning about the history. It really encouraged me to want to preserve it and learn more about our culture.”

Though Novalinga said she’s received positive feedback from Indigenous brothers and sisters as well as other cultures, she’s also dealt with some negativity, such as non-Native people making fun of the tradition. This, too, has emboldened the young Inuk to keep educating.

When will this end? ##indigenous ##culture ##letssupporteachotherツ

“It seems to come back in a different way, that people put us down,” she said. “It just shows me that I should keep going and keep educating people because there are some people who are really appreciating us and really learning (and) educating themselves on my page and my mother's page.”

Novalinga just graduated with a business degree from John Abbott College in Montreal, but she’s not yet done educating herself and others. She said her driving focus moving forward is sharing traditional knowledge with Native youth.

Next year, the throat singer will attend Nunavik Sivunitsavut, a one year accredited Inuit Studies program offered for Inuit youth at a campus in Montreal where students will learn about Inuit-specific history, literature, politics, language, sports, and cultural studies—including how to read and write in Inuktut.

Harriet Keleutak, who helped develop and launch Nunavik Sivunitsavut and now sits on its advisory committee, wrote to Native News Online that the program, funded by the Quebec Ministry of Education, is a life-changing experience for Inuit students.

“Nunavik Sivunitsavut has contributed to the development of a critical mass of culturally confident individuals, knowledgeable of their Inuit heritage, and prepared to lead Nunavik into the future,” she wrote.

Which aligns with Novalinga’s goals she hopes to expand and inform during the yearlong program.

“It's important for us Indigenous people to get together to learn and help each other,” Novalinga said. “There’s not many Inuit my age so I feel like it’s really difficult right now. But, like my mother said, once I get into this program it’s going to be so much easier. I’m really excited for that.”