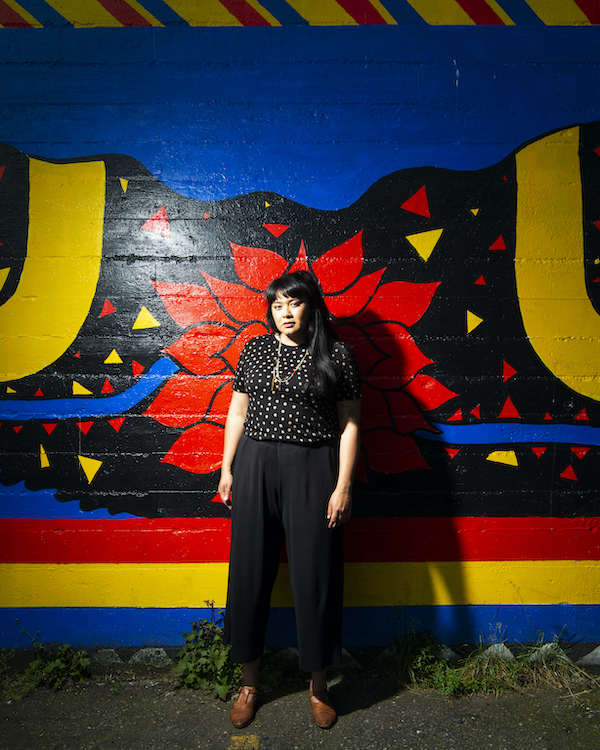 “As a queer Indigenous woman, I wanted to see that representation, so (I thought) I’m just going to do it,” KP, who uses the pronouns they/them, explained about the lack of Native LGBTQ musical voices. “I try to think where I’m coming from and present an Indigenous perspective.”

Having grown up on the Swinomish Indian Reservation in Washington state, KP learned drumming and jingle dress dance at a young age, and recalls their father singing Coast Salish and powwow songs, which instilled a love for music that remained. After moving to Portland, Ore., KP got a job at the legendary music venue Mississippi Studios and got acquainted with the local indie-rock scene and national touring bands. The exposure to new sounds and different grooves inspired KP to explore their own music and reach out to other Native musicians and bands.

Six years ago, KP formulated Black Belt Eagle Scout, which creates a fusion of upbeat indie-rock with melodic and reflective themes. Black Belt Eagle Scout varies from a solo act — where KP sings and plays multiple instruments — to a four-member band, depending on fellow musicians’ availability and touring schedules.

“If there’s a community you love and want to support, stick with it,” said KP, who believes in keeping strong community connections and creating safe spaces.

The band’s debut album Mother of My Children was released in 2018 and was met with favorable reviews for its songcraft and mood. In 2019, NPR’s influential “All Songs Considered” gave props to Black Belt Eagle Scout’s latest album,  At The Party With My Brown Friends, praising the guitar playing, songwriting and calling it “a celebration of love among friends.”

Both records offer an interconnectedness of the past, present, and future — one of the common themes of Indigenous Futurism.

“(For me) Indigenous Futurisms has a lot to do with living, finding that happiness and resilience to keep ongoing. Don’t just say surviving, we’re thriving,” claimed KP.

For a growing number of Native musicians and singers, thriving comes from coming together and working in a music collective like Black Belt Eagle Scout that mixes the traditional with the new to create songs that will connect with current and future generations.

Around North America, Indigenous musicians and singers are combining Native language, instrumentation and singing styles with modern beats and progressions to authentically communicate their experience. Borrowing themes and styles from rock, indie, hip-hop, country and other music genres, these artists showcase how Native resilience is alive and reveals the evolution of storytelling through sound.

One of the most recognizable collectives in Indian Country is Canadian-based DJ collective A Tribe Called Red (ATCR), whose namesake pays homage to ‘80s hip-hop group, A Tribe Called Quest. Originally established in 2008, the duo is currently made up of 2oolman (Mohawk) and Bear Witness (Cayuga). ATCR is known for its forward-thinking as it “straddles a broad range of musical influences based in modern hip-hop, traditional pow wow drums and vocals, blended with edgy electronic music production styles.”

Their third album We Are The Halluci Nation features a wide range of musicians, such as activist/poet/musician John Trudell (Santee Dakota), Yasiin Bey (AKA Mos Def), Australian aboriginal band OKA and Colombian visual artist and musician Lido Pimienta. In 2016, music publication Pitchfork hailed the album as “Canadian DJs’ unique ‘powwow step’ turns the pulse of First Nations music into a modern electric dance soundtrack that is politically thrilling and immediate.”

According to their site, “A Tribe Called Red promotes inclusivity, empathy and acceptance amongst all races and genders in the name of social justice. They believe that indigenous people need to define their identity on their own terms. If you share this vision, then you are already part of the Halluci Nation. ‘We are the Halluci Nation.’”

Other Indigenous musicians are joining forces to form collectives, such as Dream Warriors.

Winder described her music as not being confined to one genre, and her “eclectic” style could be considered Motown-emo. She has openly expressed how her personal life and loss significantly influences her lyrics. Singing is a way for her to process these low emotions and heal from it.

“When I’m singing, my spirit is coming alive. Artists I see now are doing what feels their soul,” said Winder.

As she and the collective have grown as artists, Winder noted the unique changes in their sounds and that more songs incorporate indigeneity. The pandemic has not deterred the group from connecting with one another, and they participated in virtual workshops with a tribal radio station.

Each Dream Warrior is spread out through Indian Country and travels to perform concerts, teach empowerment and artistic skill sets, run workshops, showcase his/her performance art & artistry and speak at various engagements. Dream Warriors reaches out to uplift younger artists and has distributed annual scholarships to Native artists of all genres since 2015.

In Winder’s opinion, “It doesn’t do you any good to hold yourself back. It may not get you famous, but you are meant to share your music to make you and others feel good.”