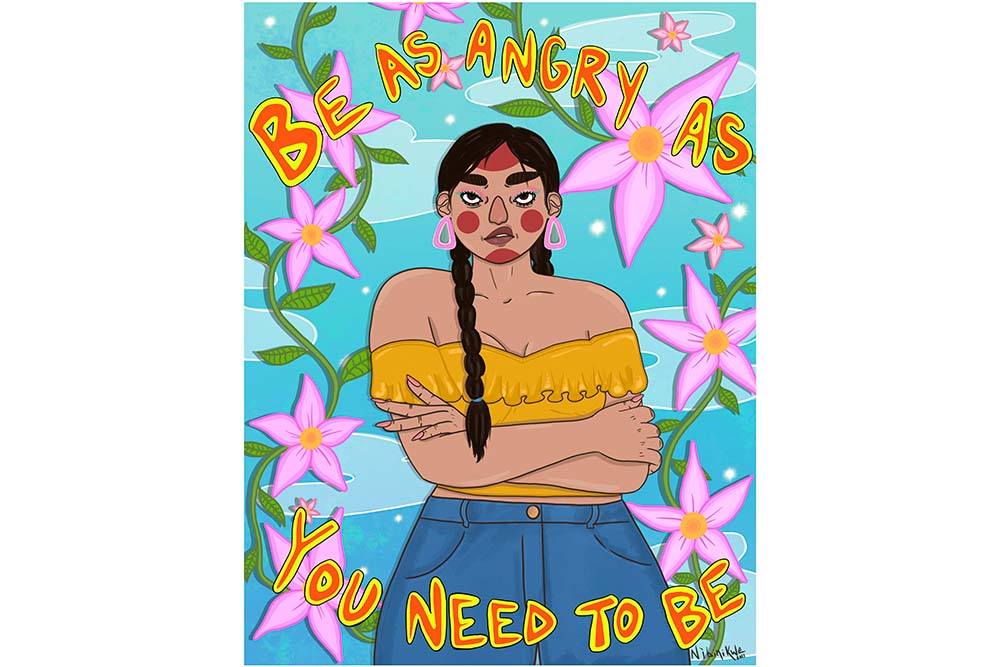 This weekend and next week, Indian Country is alive with events accentuating Native American Heritage Month.

The ample eye-opening opportunities to appreciate and indulge in Indigenous brilliance include a pop art show with pieces straight out of Reservation Dogs, a documentary film focused on empowering the girls of Pine Ridge Reservation, and a ceremony celebrating some of Indian Country’s top leaders and role models. 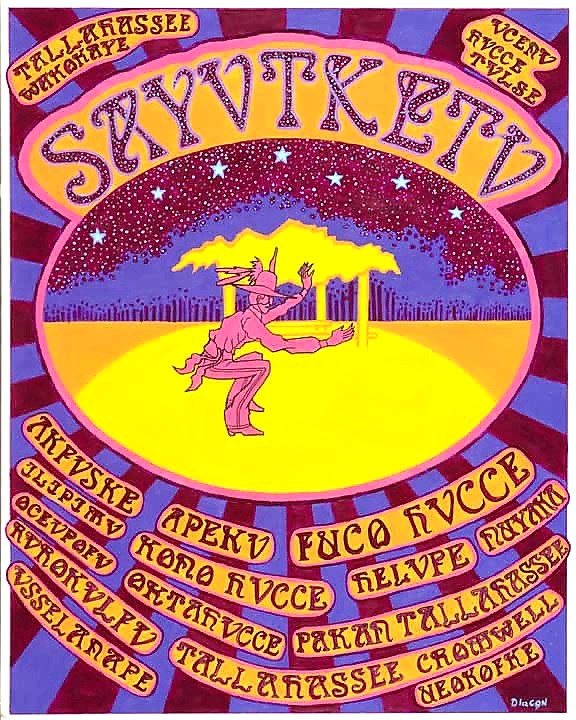 Bear Smallhill (D'Pharaoh Woon-A-Tai), the unofficial leader of the ragtag Reservation Dogs pack, has some fine taste in Indigenous art.

The walls of the character’s Oklahoma home are covered with work from major Muscogee artists, including Johnnie Diacon. Diacon’s candy-colored 60s-style Stomp Dance poster hangs over Bear’s bed, adding a funky fusion of psychedelic and Indigenous art to the handsome young hero’s personal space, and to the overall authentic and gritty aura of the groundbreaking hit show.

“That show is so awesome and I am so honored to have such a small part in it. It's fun to watch the show with my family and see my work pop up in the background like an Easter egg,” Diacon told Native News Online. “Bear's family has good taste in art for sure. It speaks to the pride and knowledge of who we are  as Indigenous people in the 21st Century.  It's more proof that representation matters and It says a lot about how important our images and culture are to us.”

Straight out of Reservation Dogs, Bear’s groovy bedroom poster is part of the new exhibit 49 Minutes of Fame, a celebration of pop art produced by Indigenous artists, being shown in honor of Native American Heritage month.

A play on a name for powwow after-parties, and on pop art god Andy Warhol’s prediction that everyone will have 15 minutes of fame, 49 Minutes of Fame is a bold show with a widely inclusive perspective on pop art, including novel interpretations of traditional materials, artistic appropriations of popular mythologies, and pieces that metaphorically "pop" flat and overused myths and stereotypes.

In the exhibit, curated by Tom Farris of the First Americans Museum in Oklahoma City,  and Todd Richardson of University of Nebraska Omaha,  Diacon is joined by artists including Chase Earles, Katie Dorame, Micah Wesley, Marlena Myles, Dustin Mater, and Sarah Rowe.

Diacon deems his Stomp Dance poster a perfect fit for the ebullient exhibition.

“I thought, what could be more pop art than 60s concert posters, and Native-themed 60s concert inspired ones at that? They are Native Pop Art for sure,” said Diacon, whose painting “Everybody Dance: Green Corn Suite” also adorns the cover of Muscogee U.S. Poet Laureate Joy Harjo’s collection “An American Sunrise.”

“In designing the Sayvtketv (Stompdance) piece, I placed the Mvskoke word for stompdance, Sayvtketv, in the center,  like the 60s concert posters would with the name of a concert’s venue. Around that, I placed the Mvskoke names for the active ceremonial grounds from around the Muscogee Creek Nation Reservation in Oklahoma, like the names of the bands performing at a concert would be on the old posters.”

Neither Aunty nor the artist are ashamed or particularly concerned with colonizer notions of calmness.

In fact, they’re both engaged in and empowered by the practice of Biskaabiiyang, which is in an Anishinaabeg word meaning Returning to Ourselves, and also the name of the art exhibit in which Aunty and Harmony-Twenish are featured.

“Anger isn’t a bad emotion, especially when it stems from colonial trauma, and I think sometimes it’s easy to forget that. I had always been taught, especially in settler-colonial academic spaces, that anger was a sign of weakness,” Harmony-Twenish told Native News Online.  “I wanted to focus on the idea of Indigenous women and femmes taking up space and being unapologetic in their existence. So often we are told to shrink ourselves; physically, in terms of our emotions, and what we say. We should never have to shrink ourselves, or ‘get over’ anything unless it is on our own terms.”

Every piece in Biskaabiiyang is an example of Indigenous Futurism, a movement picturing what a future without colonial stereotypes, and where Indigenous people are free to be their authentic selves, would look like.

”The beauty of this exhibition is that it places Indigenous artworks in the here and now, and shows viewers that “Indigenous art” isn’t limited to traditional mediums. Our worldviews and experiences are what influence what we create, and I think there’s power in that,” Harmony-Twenish said. “We have stories and teachings and languages that have survived 500+ years of occupation and violence, and we are using these tools to re-imagine and re-build our world. For our ancestors who fought so hard to keep our stories alive, and for the descendants who will be born into a world that values them.” 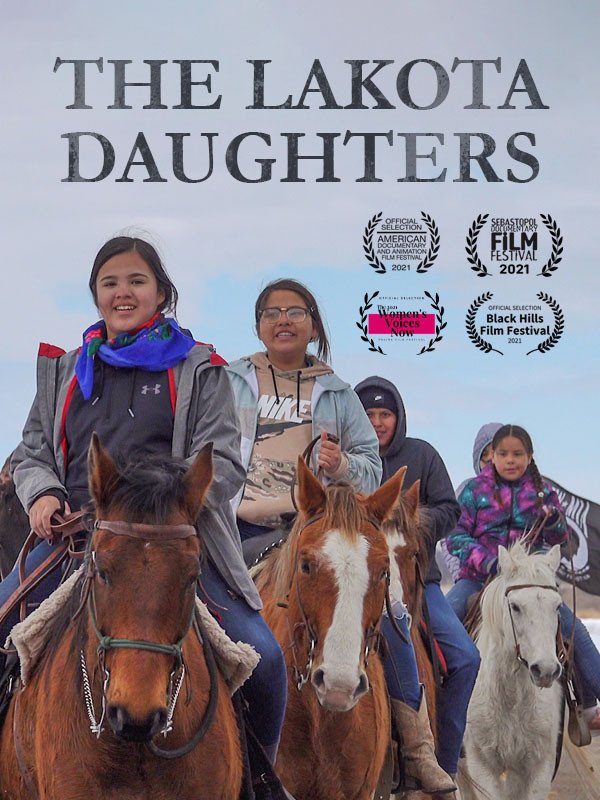 The documentary The Lakota Daughters will be screened on Friday, Nov. 5 at the Lumiere Music Hall in L.A. as part of the Red Nation International Film Festival. (RNIFF) WHEN: Friday, Nov. 5,  8 p.m.

Girl power is a pressing matter on Pine Ridge Reservation.

Many of the young Oglala Lakota women on the impoverished South Dakota reservation often have to shoulder family caretaking responsibilities, and also fall victim to early pregnancy, domestic and substance abuse, and predators seeking to traffic or otherwise harm them.

To help lift them out of danger and learn to honor their own sacredness and potential, the women of Pine Ridge, in conjunction with The Indigenous Adolescent Girls’ Empowerment Network (IMAGEN), are cultivating a “Girl Society” for 10 to 18 year-olds.

The documentary The Lakota Daughters takes a look at the perils the girls of Pine Ridge face, and the Girl Society, which is meant to provide a safe space fostering resilience and self esteem. The girls meet and talk on a regular basis, and get personal, traditional, educational and career guidance from Lakota women and other professionals in the area of adolescent empowerment.

The 33 minute documentary, written, directed and produced by Victoria Kupchinetsky, is one of four films comprising Program One of the Red Nation International Film Festival’s documentary shorts.

The other three shorts being screened on Saturday are Poteet, the story of Native American artist Poteet Victory; Joe Buffalo, which is about the titular legendary skateboarder and his recovery from residential school trauma; and Love in the Valley, a visual Valentine to Indigenous artist Lonnie Anderson’s wife, and their home in Albuquerque’s South Valley. 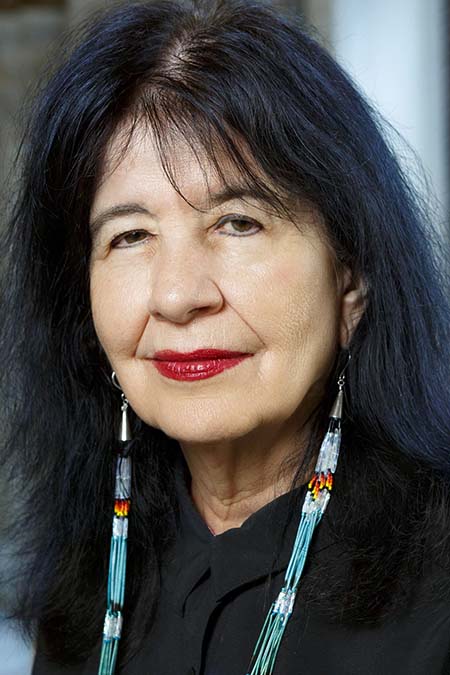 U.S. Poet Laureate Joy Harjo (Muscogee) will be inducted into the Native American Hall of Fame on Saturday, Nov. 6 at the First Americans Museum in Oklahoma City.  WHEN: Saturday, Nov. 6,  6 p.m.

Indigenous leaders in the fields of business, government, culture, writing, advocacy, medicine, and the arts, will be honored at the 2021 Native American Hall of Fame Induction Ceremony, taking place at the new First Americans Museum in Oklahoma City.

The ceremony is open to the public, and will include dinner and entertainment. To make reservations, email [email protected] or call 406-590-1745.  For more about the inductees, click here.