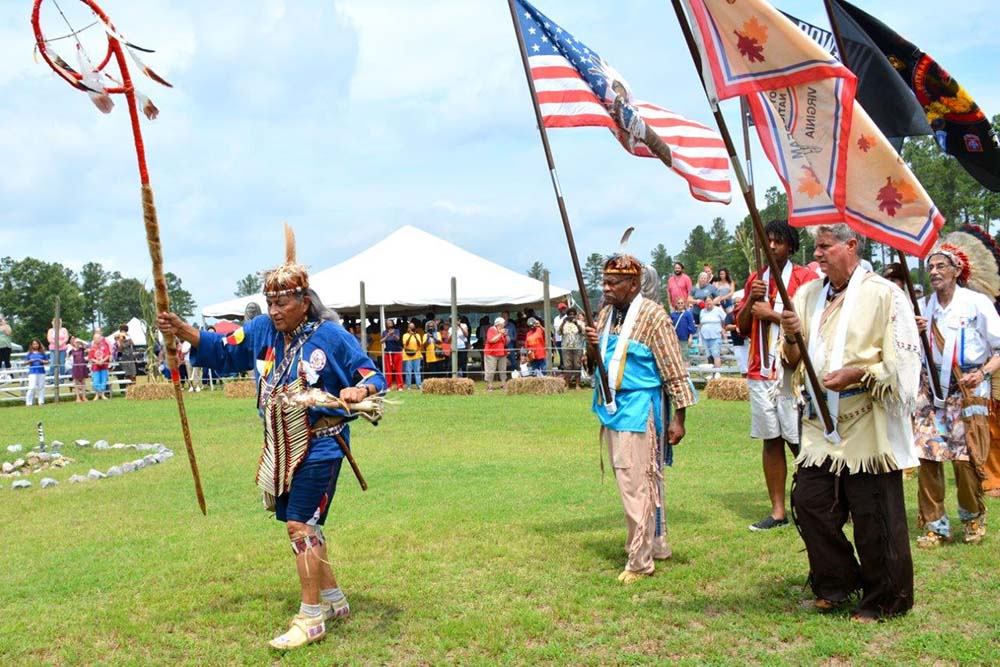 This week in Indian Country, Indigenous artists, dancers, and others are sharing their history with the public—and in some cases, confronting injustice.

Among the highlights are an initiative to spread First Nations art honoring boarding school victims on billboards across Canada and a powwow with roots in the 17th century. Here’s Native News Online’s guide to all that’s happening in Indian Country.

WHERE: Billboards in cities, major highways, subway systems, and transit shelters across Canada

For more than two months, artwork created by eight First Nations artists will be displayed on digital billboards across Canada to honor the hundreds of Indigenous children whose remains have been discovered in unmarked graves near three Indian boarding schools.

The campaign, which is called the Honour Project, was organized by the charity Artists Against Racism. According to the charity, digital billboards were donated by Pattison Outdoor, and the goal of the initiative is to honor the lost children and keep their memory alive, support the Indigenous community, and generate national conversation that leads to truth and reconciliation.

Colleen Gray (Métis), an Ottawa-based watercolour artist and Governor General Award-winner, created a painting titled “The Homecoming” for the campaign, according to Artists Against Racism.

“As the body count began climbing in the days after the first 215 were found, I found myself becoming angry… It takes the bodies of children to wake the country up to the real history of Indigenous people in Canada,” Gray said. “I was inspired to paint my anger, but also to paint the peace and hope I felt at these children reuniting with their ancestors.” 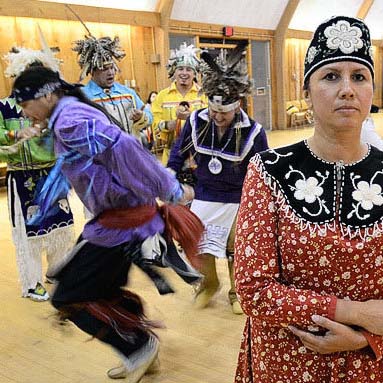 Haudenosaunee dancers. (Photo/Sacred Fire Foundation) WHEN: Performance will take place at various times on July 3 between 10 a.m. and 5 p.m.

WHERE: The Iroquois Museum in Howes Cave, N.Y.

The Haudenosaunee Singers and Dancers, a troupe of Indigenous performers primarily from the Onondaga Nation, will perform at the Iroquois Museum on July 3 as part of its  Echoes of Tradition series.

Sherri Waterman-Hopper, a member of the Beaver Clan of the Onondaga Nation, formed the troupe with her children more than 20 years ago to teach others about her culture with a positive spirit, according to the Sacred Fire Foundation. The troupe has since traveled internationally and invites audience members to join each dance, the foundation said.

The Iroquois Museum will host Native dancers and artists throughout the summer and into the fall as part of its Echoes of Tradition series. Those interested can register on Eventbrite for any of these events. All events are free with museum admission except for the Fingerweaving Workshop on July 25. 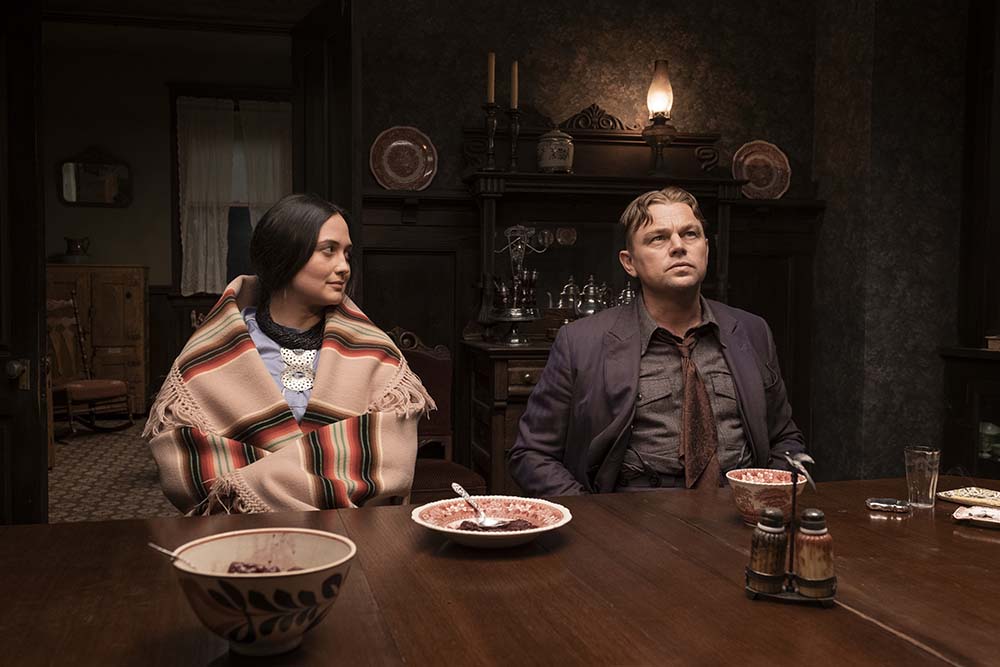 A scene from the upcoming film “Killers of the Flower Moon.” (Photo/Apple TV Press)

WHEN: Dancers are needed July 8-9

The producers of the upcoming major feature film “Killers of the Flower Moon” have sent out a virtual casting call for Native American ballroom dancers who have taken classes in popular 1920s dances.

These dances include Fox Trot, Charleston, Peabody, Lindy and/or Tango. Applicants can apply through email and include a video link of themselves performing styles of dance they are comfortable with.

Filming started earlier this year in Pawhuska, Okla., according to Oklahoma 2 News. The film is based on David Grann’s bestselling book “Killers of the Flower Moon: The Osage Murders and the Birth of the FBI,” which “depicts the serial murder of members of the oil-wealthy Osage Nation, a string of brutal crimes that came to be known as the Reign of Terror,” according to Apple TV Press. \

To learn about the Osage Nation’s involvement with the film, check out reporting from Osage News.

A day of celebration and cultural remembrance will take place on tribal land owned by the Cheroenhaka Tribal Council, including dancing, drumming, Native foods, arts and crafts vendors, and flint knapping. All dancers are welcome, and the powwow is open to the public. Admission fees are $6 for adults and $4 for children 6-12 and adults over 65.

On the land where the powwow will be held, the tribe said it has created an Iroquoian palisade village that is a replica of a Cheroenhaka village described by William Byrd II of Westover in the 17th century. Chief Walt Red Hawk Brown will deliver a talk about the history of the Cheroenhaka Tribe.

“(Byrd) also described how the women looked and how the men came out, and they were dancing and singing to the sound of a gourd drum stretched tight with an animal skin,” Chief Brown told Native News Online. “From our perspective, that was the first recorded powwow in West Virginia that was actually recorded, 1728.”

Chief Brown said the tribe was unable to hold a powwow last year due to the Covid-19 pandemic.

“So we’re just happy that the Creator’s blessing us again, because it’s been almost two years since we have entered the sacred circle of life and danced for the Creator at a powwow,” Chief Brown said.

Gilcrease Museum to be Torn Down, Moved to New Location on Osage Reservation 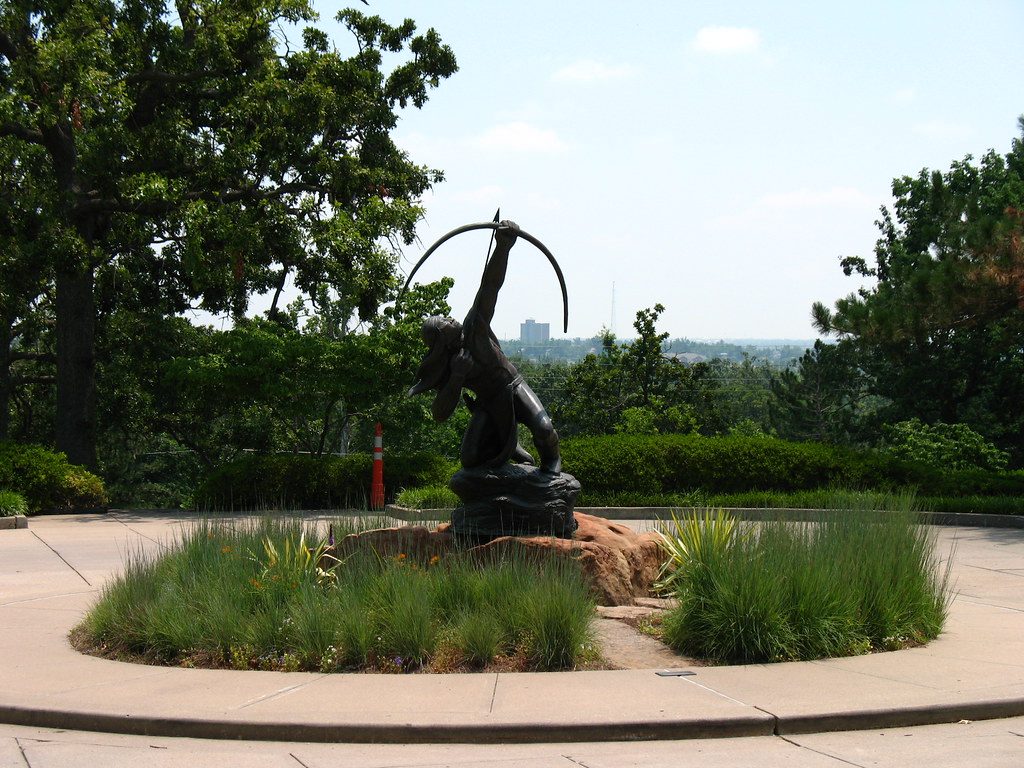 Sacred Rain Arrow,” a statue at the Gilcrease Museum that was created by Allan Houser (Chiricahua Apache). (Photo/ “Statue at Gilcrease Museum” by imarcc is licensed under CC BY-ND 2.0)

WHEN: July 4 is the last day the Gilcrease Museum will be open to the public before the museum’s temporary closure. Construction of the new location is planned to begin in January 2022 and finish in late 2024/early 2025.

The Gilcrease Museum will temporarily close to the public on July 4 in anticipation of the demolition of the current museum and the construction of a new building on the Osage reservation.

The museum was established by Thomas Gilcrease (Creek) in 1949. The Gilcrease collection contains more than 350,000 items and represents hundreds of North and South American Native cultures, “with material culture and archaeology ranging from 12,000 BCE to the 21st century.” The museum has said it will loan some of its collection to other museums, including the First Americans Museum in Oklahoma City.

The museum also said that the planned new location is on the Osage Nation reservation, will offer “panoramic views of the Osage Hills,” and “contains subtle references to Osage culture.”

“The museum is conceived to align cardinal directions with natural elements and experiences: north/sky; south/earth; west/night; and east/day,” the museum said in a statement. The color and material palettes for the building reflect the art deco styles found throughout Tulsa, including the use of stone and gilded metals in concert with natural tones of the land and sky. The lower level of the building is comprised of earth tones, creating a connection to the ground, while the upper level utilizes sky tones, blurring the line between architecture and the sky.”

The museum said community input for the project has included “35 consultations with tribes whose art, culture, and history is represented in the Gilcrease collection.”