A wildly entertaining week in Indian Country is coming your way.

Among the highlights are a play set in an alternate Navajo Nation, a tribute to wildland firefighters and a pro-vaccination powwow celebration.

Dive into Native News Online’s event guide to design an ideal week in line with your Indigenous interests.

Extra Tough: Women of the North

A glamorously cool portrait of Miss Alaska 1953 Muriel Hagberg fishing on an ice floe in a fabulous fur-lined bathing suit, a re-imagining of Alaska Native voting rights activist Clara Peratrovich as Rosie the Riveter, and a thrilling Tlingit take on Vermeer’s “Girl With a Pearl Earring” are all part of a perspective-shifting new show at the Anchorage Museum.

“Extra Tough: Women of the North”, turns Alaska’s stereotype as a rugged land for the pioneering macho man on its pretty little head.

With paintings, photographs, videos, dolls, and more objects and images representing  the extreme fortitude of females and two-spirits who shape life, work and culture in the far North, the exhibit explores how the challenges of Northern living impact women and how they in turn affect and enrich the region.

Divided into categories including Women and Society, Women and Place and Women and Work, the show includes last frontierswomen of many backgrounds, with a strong concentration on the resilient and talented Indigenous women who form the foundation and future of the region.

Into the Fray: Native American Wildland Firefighters of Warm Springs and Beyond

Facing the flames with dignity, courage, and purpose, is a great privilege and responsibility for Indigenous wildland firefighters.

“Into the Fray: Native American Wildland Firefighters of Warm Springs and Beyond,” illuminates the history and present of these elite and highly skilled protectors of the people through photographs and paraphernalia including boots, uniforms and hats.

“This exhibition examines and pays tribute to the lives of our Native brother and sister wildland firefighters of Warm Springs and other Native nations,”  Museum at Warm Springs  Director Elizabeth A. Woody (Warm Springs, Yakama and Navajo) said in a statement. “These brave individuals are part of our contemporary culture and contribute to our story — and the safeguarding and preservation of our land and peoples for future generations.”

Exhibit-goers will also learn about the strong bonds that form among wildland firefighters, the rewards that come with the daring career, and the respectful, symbiotic relationship between Native Americans and fire.

For the Love of Our People Virtual Powwow

WHERE: Social Distance Powwow and IllumiNative 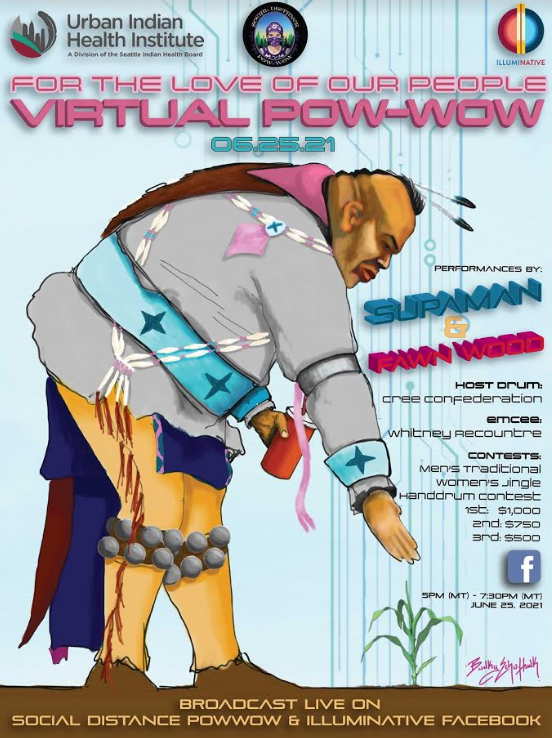 And that calls for a pro-vaccination celebration.

To mark that milestone and encourage even more Indigenous people to get vaccinated , The Urban Indian Health Institute and IllumiNative are hosting the For the Love of Our People Virtual Powwow.

New Play: When We Breathe by Jaisey Bates

Award-winning Huron playwright Jaisey Bates adds a new dimension to Navajo Nation in “When We Breathe.”

In the imaginary Nation existing alongside the real one, the lives of a set of twins, their mother and a sibling of another species, intertwine in magical and sacred ways.

A virtual reading of the play will be performed online on Tuesday as part of the 27th Festival of New Plays presented by the Native Voices at the Autry theatre company.

Founded in 1994, The Autry Museum of the American West’s  Native Voices at the Autry, company is the only Equity theatre company in the U.S. focusing exclusively on the development and production of new works by Native American, Alaska Native, Native Hawaiian, and First Nations playwrights.

WHERE: The Museum of Indian Arts and Culture, 710 Camino Lejo, Santa Fe, NM

Divided into two parts, the exhibition looks into how Native artists mix ancestral ways with modern glass work methods and materials, and also examines the introduction of glass art to Indian Country.