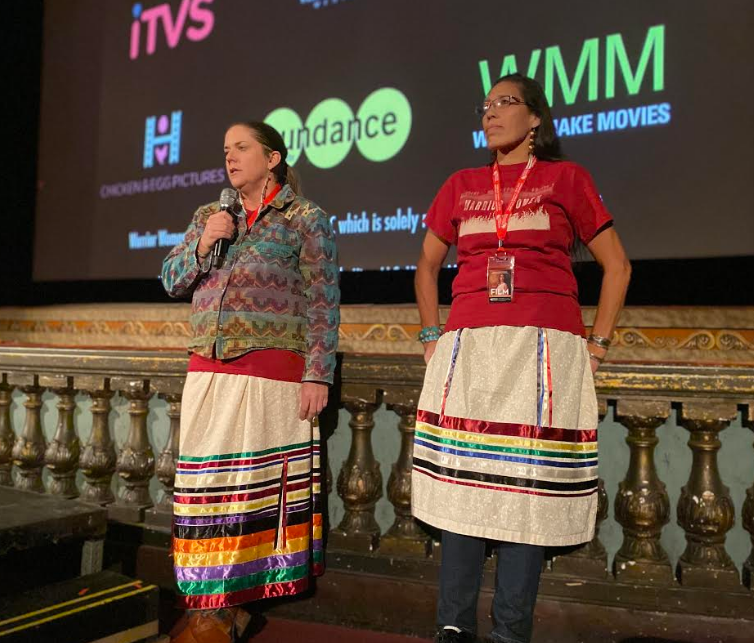 This year’s festival was scheduled to premiere at the Virginia Museum of Fine Arts, after three years at the historic Byrd Theatre in Richmond, Va. Due to efforts to curb the spreading of the coronavirus, this year’s film festival is set to take place virtually like many other events.

“We’re excited to showcase the Fourth Annual Pocahontas Reframed Storytellers Film Festival with the Virginia Museum of Fine Arts,” said Pocahontas Reframed Storytellers Film Festival President Brad Brown to Native News Online. “Even though it’s virtual, people can enjoy the selected films we have all weekend long from their devices.”

Brad Brown (Pamunkey Indian Tribe) is one of a group of local organizers in Virginia who organize the annual film festival in partnership with various organizations including the Virginia Museum of Fine Arts, Virginia Humanities, and the Virginia Film Office. Some of their sponsors include the French Film Festival, American Evolution, and the Virginia Indian Tribes. Their mission is to challenge the public’s perception of the myth of Pocahontas and reframe a truthful past that addresses colonization and reconciliation.

General admission for the film festival is free and can be done on their website. Throughout the weekend, there are 10 films ranging from short-film to full-length feature films including “Dig it if You Can” by Kyle Bell, “Tekahionwake (Pauline)” by Canadian Mohawk writer/producer/director Shelley Niro, and “Totems” by (Arikara, Oglala, and Hunkpapa) filmmaker Justin Deegan.

“Tekahionwake” is about E. Pauline Johnson, who was documented to have been a “powerful wordsmith” who traveled the North American speaking against colonization. Johnson’s mother was British, and her father was a Mohawk chief from the Six Nations of the Grand River. It’s a short, 19-minute film.

“Her capacity for change towards the perception of Indigenous people in North America was the beginning for a long struggle,” said Shelley Niro of Tekahionwake (Pauline) on the film festival’s website.

“Totems” by Justin Deegan is set in post-apocalyptic Seattle about two Indigenous men existing in the aftermath of colonial America. In Deegan’s description of “Totems,” the story is about finding a new way of existing as Indigenous men on Turtle Island, in the city of Seattle. It’s 10 minutes long, with viewers wanting to see more of the story.

“They took our language, our ability to hunt and gather, and our way of life,” said “Totems” director Justin Deegan to Native News Online. “Totems is about finding out what it means to be a modern Indigenous man.”

The film stars Ajuawak Sapasheshi (“Indian Horse”) and Ben Dupris and is filmed in black and white. Deegan shared his reason for filming in black and white was because he was inspired by the 1961 film “The Exiles,” which chronicles a day in the life of a group of more than 20 American Indians who left their reservations in the 1950s to live in East Los Angeles, Calif. during the Relocation Era.

The Pocahontas Reframed Storytellers Film Festival is an annual film showcase addressing the cultural narrative of America’s Indigenous peoples while highlighting Indigenous filmmakers, stories, and traditions of some of Indian Country’s most talented storytellers. Previous films include “Rumble: The Indians Who Rocked the World,” “The Doctrine of Discovery,” “Neither Wolf Nor Dog,” “Reel Injun,” “The Incredible 25th Year of Mitzi Bearclaw,” and includes various performances by dance groups, musicians, and storytellers.

“Pocahontas Reframed was one of the best experiences we had for feeling at home and appreciated in an Indigenous space,” said “Warrior Women” co-director Elizabeth Castle to Native News Online. “It's a powerful thing to be lifted up for the values that often keep films like ours at the periphery or in the ‘special Native area’ to naturally be at the center.”

“Warrior Women” was previously selected to showcase at the film festival. It is the story of mothers and daughters fighting for Native rights in the American Indian Movement of the 1970s. Co-Directors Christina D. King and Elizabeth Castle compile footage from the 1970s through the fight against the Dakota Access Pipeline on the Standing Rock Indian Reservation to the travels of various Native youth to challenge the Pope to rescind the Doctrine of Discovery at the Vatican.

“There were so many great opportunities to have real conversations about the things we care about and the reason we make the art in the first place,” said Castle of the film festival.