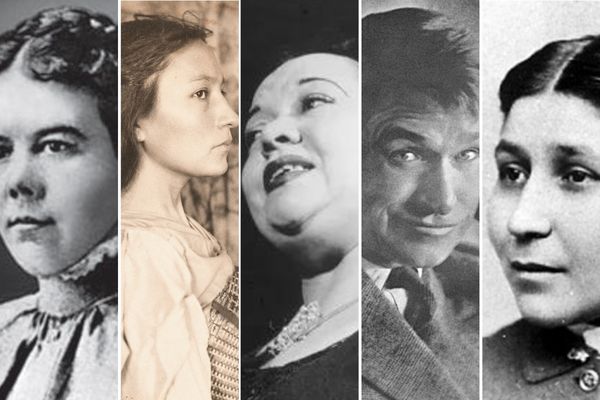 Indigenous peoples have persisted in the face of systemic racism and oppression to make indispensable contributions to our society.  Earlier this week, in celebration of Native American Heritage Month, we shared stories of five Native Americans who helped shape American culture.  Today, here are five more Natives of note who had a tremendous impact on culture in the United States.

“The Queen of Swing” Mildred Bailey was a popular jazz singer who rose to fame in the 1930s. She is considered the first non-African American jazz star.

Bailey’s mother was an enrolled member of the Coeur d’Alene tribe. After growing up on the Coeur d’Alene reservation in Northwest Idaho, Bailey began a career at age 17 playing piano in movie theaters and singing in speakeasies in the Pacific Northwest. Then, still in her teens, she moved to Los Angeles, where her signature light soprano drew crowds when she sang at various nightclubs around the city.

Inspired by her success, Bailey’s brother, singer Al Rinker and his friend Bing Crosby followed her to LA and were subsequently hired by legendary bandleader “King of Jazz” Paul Whiteman. Bailey later joined Paul Whiteman’s orchestra and became the first-ever female vocalist in a big band.

Throughout her career, Bailey performed both solo and with her husband, Red Norvo’s group. As a performing couple, Bailey and Norvo became known as “Mr. and Mrs. Swing.”

She recorded and performed with the era’s top jazz acts in top New York City nightclubs, and in 1944, she had her own CBS radio series. Her renditions of “Georgia on My Mind” and “Rockin’ Chair” were fan favorites, and she recorded three number-one hits: “Please Be Kind,” “Save My Heart,” and “Darn that Dream.”

In 1945, she took a step back from her career due to health problems, though she would occasionally perform until her death in 1951. In 1989, Bailey was inducted into the Jazz Hall of Fame, and in 1994 the US Postal Service issued a 29-cent stamp in Bailey’s honor.

Iconic vaudevillian, actor, and writer Will Rogers is one of the world’s most beloved entertainers. Throughout his illustrious career, he made 71 films, wrote more than 4,000 nationally syndicated newspaper columns, traveled the world three times over, and became the highest-paid Hollywood star of his time.

Rogers was born in 1878 on Cherokee Nation to mixed-blood Cherokee parents. He was one of eight children, four of who, including Rogers, survived to adulthood. Roger’s father, Clek Vann Rogers, was an attorney and judge who served several terms on the Cherokee senate.

At 22 years old, Rogers left home to pursue a career as a gaucho — or horseman — in Argentina. After failing to secure work, he set sail for South Africa, where he began his career in show business as a trick roper.

In the early 1900s, he became a staple of the U.S. vaudeville circuit, where he delighted crowds with his lariat prowess, daring riding, physical prowess, and off-the-cuff political commentary. In 1918, he landed his first staring role in Hollywood and would go on to star in 50 silent films in the next nine years. When talking pictures took over the industry in 1929, Rogers was one of the few silent pictures stars to successfully transition to “talkies.”

Throughout his film career, Rogers was also a prophetic writer. Launched in 1926, his column “Will Rogers Says” reached 40 million newspaper readers, and he published a series of humor books. Additionally, Rogers became a radio star with some of the most popular shows of the medium.

He died in 1935 with aviator Wiley Post when their airplane crashed in a lagoon in Alaska.

Throughout his life, Rogers excelled in all his pursuits and captured the hearts of Americans as the humorist-philosopher who spoke for the common man.

Today, more than a half-dozen memorials are dedicated to Rogers’ memory, including Will Rogers State Historic Park in Pacific Palisades, Will Rogers Memorial Center in Fort Worth, Texas, and the Will Rogers Shrine of the Sun on Cheyenne Mountain in Colorado. Thirteen schools in Oklahoma are named for Rogers. In addition, the World War II Liberty Ship SS Will Rogers was named in his honor.

Omaha tribal member Susan La Flesche Picotte made history in 1889 when she became the first Indigenous person to obtain a medical degree.

Picotte grew up on the Omaha reservation in Nebraska, where, as a child, she witnessed a sick Native woman die when a white doctor refused to treat her. The incident inspired her to train as a physician so her people would no longer suffer at the hands of white doctors.

She first attended the mission school on the Omaha reservation but later left to study at the Elizabeth Institute in New Jersey, after which she attended the Hampton Institute in Virginia. Upon graduating from Hampton with honors in 1886, Picotte was accepted into the Woman’s Medical College of Pennsylvania.

Facing the expense of medical school, she appealed to the Connecticut Indian Association, an auxiliary of the Women’s National Indian Association, which sought to “civilize” Native women with Victorian domesticity.” The association paid for her medical school expenses, housing, books, and other supplies. She is considered the first person to receive aid for professional education in the United States. After three years of rigorous study, Picotte again graduated with honors at the top of her class. She returned to the reservation to fulfill her childhood dream of providing medical care to her people.

Picotte worked as a government physician at the Omaha Agency Indian School, where she taught students basic health and hygiene. Additionally, she cared for upwards of 1,200 tribal members making house calls and seeing people in her office, which became a community gathering place. Picotte was an early advocate for preventative medicine and public health. Having witnessed the effects of alcoholism in her community, she campaigned against alcohol use. In addition, she advocated for several vital public health issues of the time, including fighting the spread of tuberculosis and food sanitation. She also campaigned to construct the reservation’s first hospital, which was finished in 1913 and named in her honor.

As a trusted community member, Picotte also advocated for the land interests of Omaha tribal members. She continued to fight for her people until her death in 1915.

The reservation hospital in Walthill, Nebraska — today a community center — is named after Picotte and was declared a National Historic Landmark in 1993. In 2021, on Nebraska’s first officially recognized Indigenous Peoples’ Day, a bronze sculpture of Picotte was unveiled by her descendants on Lincoln’s Centennial Mall.

Zitkala-Ša was an early political activist and cultural powerhouse who used her skills as a writer, musician and translator to campaign for Native American rights and rally against the boarding school system that drove the erasure of Native culture. She is considered one of the most influential prominent Native activists of the 20th century.

Along with founding the National Council of American Indians, she introduced the world to Native life with the first Native American Opera and her autobiographical articles featured in popular publications, The Atlantic Monthly and Harper’s Monthly, among others.

Born in 1876, on the Yankton Reservation in South Dakota. When she was eight years old, she was taken off the reservation by missionaries to be educated at a Quaker boarding school. She would later write about the experience in her book The School Days of an Indian Girl, in which she described the deep pain of having her culture stripped from her. Upon returning to the reservation three years later, she was startled to find that she felt as though she no longer fully belonged. She pursued higher education at Indiana’s Earlham University and studied music at the New England Conservatory of Music in Massachusetts.

She wrote about Native Life to break the stereotypes that were weaponized to drive assimilation. She published several books and articles about her torn cultural identity, existing between the joy of her education of the rich Dakota culture she longed for. Her popular works, “Old Indian Legends” and “American Indian Stories,” introduced English-speaking readership to Native American legends of various tribes and the modern Native American experience.

In 1910, she collaborated with William F. Hanson on the first American Indian Opera, Sun Dance, based on a Sioux ritual banned by the federal government.

Throughout her life, Zitkala-Ša lobbied for Native rights and cultural preservation. She co-founded the National Council of American Indians in 1926 to advocate for Indigenous people’s rights to citizenship and other civil rights they were being denied. She served as the council’s president until her death.

Wyandotte attorney Lyda Conley was the first Native American woman and the third woman ever to argue before the Supreme Court.

She led the campaign to stop the sale and development of the Huron Cemetery in Kansas City, now known as the Wyandot National Burying Ground.

In 1907, Conley filed a petition against the federal government’s sale of her tribe’s ancestral burial ground in the U.S. Circuit Court for the District of Kansas. The court ruled against Conley, so she appealed, and the case went to the Supreme Court, where Conley appeared as the first female Native American lawyer to argue in front of the court. The court ruled in favor of the federal government. Nevertheless, the case gained national attention, and Conley and her sisters gained support from organizations around the country. In 1916, a bill was passed in Congress that precluded the sale of the cemetery and made the land a national park.

Conley became a guardian of the cemetery and cared for its lands and the inhabiting wildlife until her death in 1946.