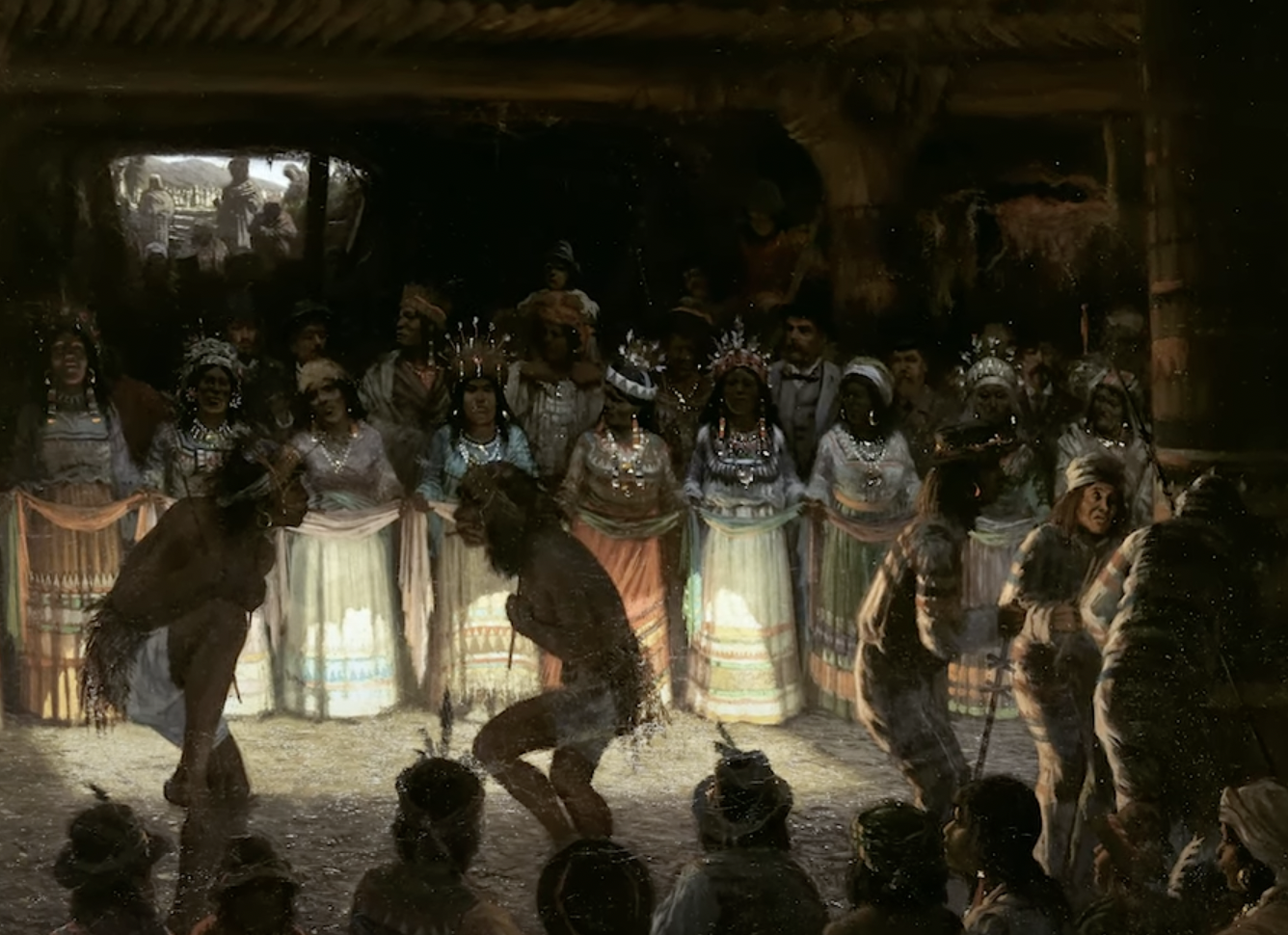 SAN FRANCISCO-–It’s not often that a northern California tribal nation gets acknowledgement in a major urban art museum. That is exactly what has happened at the de Young Museum in San Francisco with the opening of the exhibit, Jules Tavernier and the Elem Pomo, on view until April 17, 2022. This exhibition focuses as much on the subjects of a painting–the Elem Pomo Tribe of Clear Lake– as the artist.

A painting from the exhibition, entitled Dance in a Subterranean Roundhouse at Clear Lake, California is now in San Francisco for the first time since its completion in 1878 by French artist Jules Tavernier, at his studio that was located near Portsmouth Square. The Elem Pomo Tribe’s baskets and other items depicted in the scene were held privately for many years, until the Metropolitan Museum of Art in New York (the Met) displayed them in 2021. The de Young Museum decided to expand the exhibit and focus on the tribe, because the tribe is still here, still making art and baskets, and still holding ceremonies today.

Robert Geary, Elem Pomo Cultural Tribal Historic Preservation Officer and Cultural Leader for the Elem Pomo, first saw the painting at the Met. He was so moved by it, that he became a co-presenter along with Dry Creek Pomo basket scholar Dr. Sherrie Smith-Ferri and Eastern Pomo artist Meyo Marrufo. These three co-presenters helped the de Young Museum create an exhibit that expands and continues the history from the time Tavernier painted until today.

“I want visitors to know that we still exist. We’ve always been here, we are here now, and we will continue to be here,” said Geary. “When I look at this painting, I know that one of those people is my direct relative, but I consider all of those people in that roundhouse my relatives. The ceremony Tavernier painted was the MFOME ‘XE, or Peoples Dance. Its purpose is to heal and renew our people and the earth from the effects of colonization,” explained Geary. There is still a roundhouse at that same site today.

There is great irony in the fact that Travenier’s painting was commissioned by San Francisco banker Tiburcio Parrott for his French business partner Edmond deRothschild. The two men, with a French military officer, are depicted as spectators in the roundhouse ceremony. Parrott owned and operated the Sulpher Bank Quicksilver mine, where mercury residue contaminated most of the Pomo’s Clear Lake territory and continues to affect Clear Lake today. That is one of the reasons Robert Geary and his co-curators wanted to expand the story into the present.

The exhibit includes more than 40 pieces of Pomo basketry and regalia, and includes a brief and moving film of contemporary interviews. In the film, Marrufo says, “those people who entered our land must have lost their minds and said, ‘I want this’ because it was so lush. They contaminated an entire lake without thinking about how it affected our people.” Dry Creek Pomo scholar Smith-Ferri points out that the “size and types of materials used in the baskets from the late 1800’s proves the extensive ethno-botanical knowledge that those basketweavers held. They understood intimately what was needed to create such an abundance of plants and animals and how to maintain the balance needed.”

Geary and the Elem Pomo dancers and singers presented the same MFOME ‘XE for visitors that is depicted in the painting. “Clear Lake today is listed as a Superfund Site as a result of the Sulpher Bank Quicksilver mine. But we made it through. It was a very difficult time for all of us. We are still conducting the same ceremonies of 150 years ago. To see a work of art of this magnitude makes me proud to be here today. We will make sure we protect and preserve our land and way of life,” said Geary.