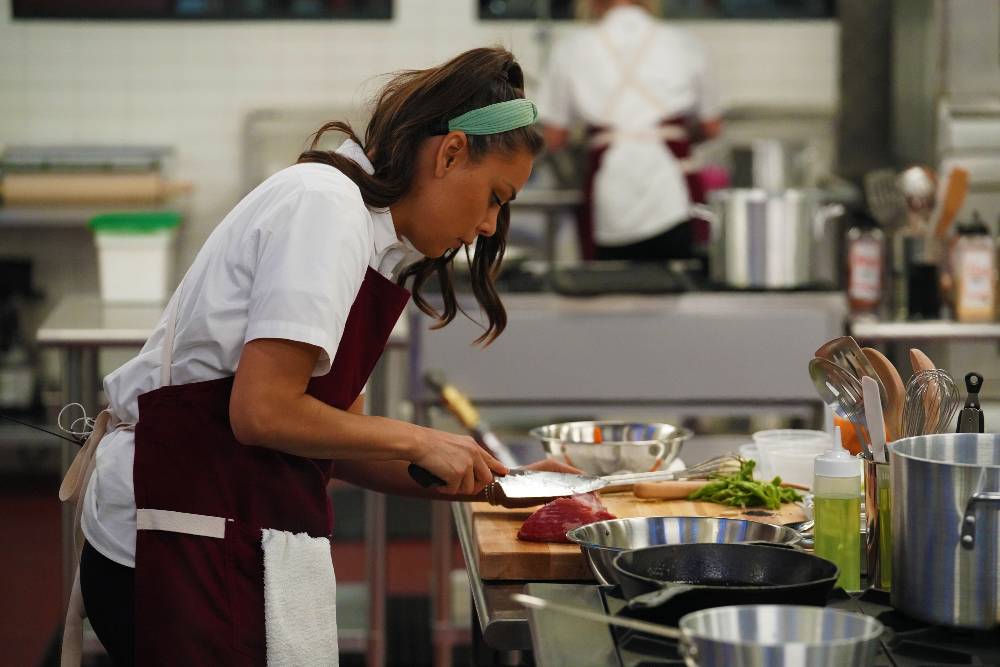 Prairie Band Potawatomi and Mexican-American Chef Stephanie “Pyet” Despain is one of three contestants moving on to the final round of Fox’s cooking reality competition Next Level Chef.

Now, Pyet, who specializes in Indigenous fusion food, melding both sides of her background, is tantalizingly close to the grand prize of $250,000 and a yearlong mentorship with celebrity chef hosts Gordon Ramsay, Nyesha Arrington, and Richard Blais.

During Wednesday night’s show, which pitted the six semifinalists against each other in a challenge to see who could create a show-stopping “performance on a plate” suited to the world’s finest restaurants, Despain won the challenge with her crustacean culinary masterpiece.

“This win means everything,” Pyet said after her dish won the semifinal round. “This is the happiest moment of my life.”

The judges agreed her butter-poached lobster laced with caviar on a bed of swiss chard, and finished with kumquat sweet and sour sauce and a ribbon of zucchini salad, was the epitome of luxury, both visually and taste-wise. Pyet presented the dish in a large clear glass bowl that elevated it to edible art, and created the under-the-sea effect she was going for.

There was nothing particularly Native American about the lobster dish, and in this case, that was intentional.

“I want to step outside of my comfort zone and show that I can do more than Native American food,” Pyet said during the semifinal show. “I have grown tremendously as a chef.”

Even though she was going for something more mainstream during the semifinals, Pyet has brought plenty of Native American tastes to the table during the show’s run, and fulfilled the promise she made earlier in the season.

“If I'm going to be on a major platform cooking for Gordon Ramsay on national television, then I need to represent,” Pyet, who has a personal chef service called Pyet’s Plate, told Native News Online.  “I need to show that Indigenous people are all capable of reaching amazing levels of success in our careers, whatever the industry may be.”

Pyet is the sleeper hit chef of the show.

For the first few episodes, she remained quietly in the middle, neither winning a challenge, nor ending up in an elimination challenge. That all changed in the fifth episode, when she broke out in a big way and scored her first win with a wagyu beef burger with traditional Native American wojapi berry sauce. The triumph was doubly sweet because of the heritage and tradition it reflected.

“I know my ancestors are singing,” an emotional Pyet said on air after the show’s creator and co-host Gordon Ramsay declared her dish the winner, and praised her for highlighting the flavors of her heritage.

From there, Pyet continued to be at or near the top of the competition, with imaginative meals with Native American and Mexican flair, including a brunch dish with fry bread, she made from scratch, chorizo, strawberry salsa and fresh avocado cream.

Next Wednesday, viewers can watch Pyet vie for the title of “Next Level Chef” on the season finale.

Whether or not she wins it all, she’s proven beyond a doubt that she’s ready to swim with the big fish, and that Indigenous chefs have what it takes to conquer the culinary world.

Next Level Chef airs Wednesdays at 9 p.m. on Fox. For more about the show, click here.