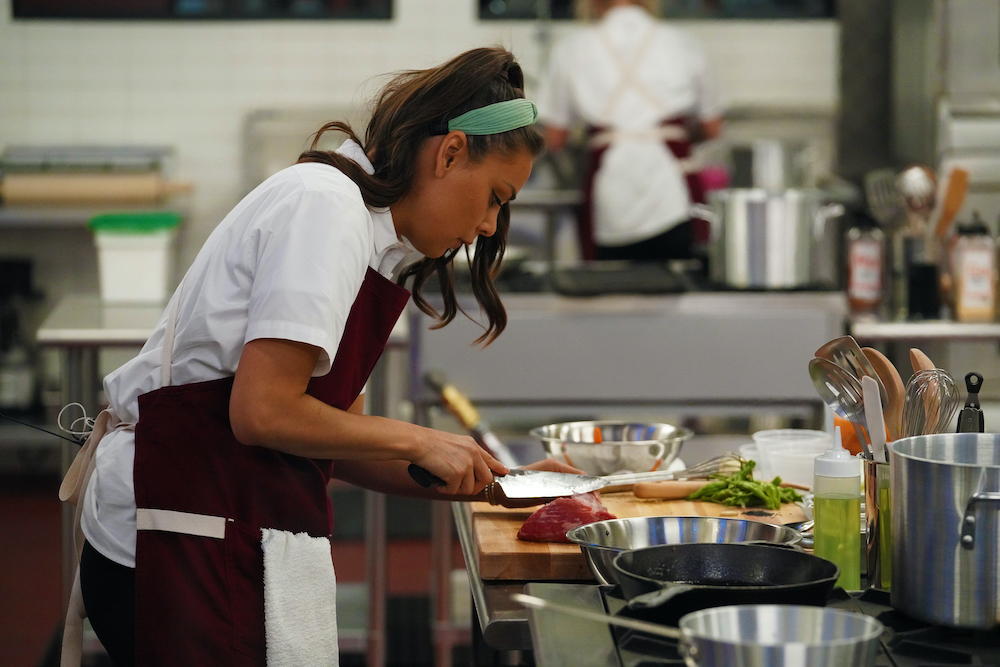 The traditional Native American berry sauce known as wojapi is on its way to becoming a household word and the condiment du jour thanks to Prairie Band Potawatomi Nation and Mexican-American culinary artist Stephanie “Pyet” Despain.

On this week’s episode of the Fox cooking competition “Next Level Chef,” Pyet slayed the burger challenge with a juicy wagyu short rib sandwich topped with wojapi.

It took a few weeks for her to rise to the top of the competition, and it was well worth the wait.

“I know my ancestors are singing,” an emotional Pyet said on air after the show’s creator and co-host Gordon Ramsay declared her dish the winner, and praised her for highlighting the flavors of her heritage.

“If I'm going to be on a major platform cooking for Gordon Ramsay on national television, then I need to represent,” Pyet told  Native News Online.  “I need to show that Indigenous people are all capable of reaching amazing levels of success in our careers, whatever the industry may be.”

The competition with a grand prize of $250,000 and a priceless year-long mentorship with celebrity chef hosts Ramsay, Nyesha Arrington and Richard Blais, is a pivotal career opportunity for Pyet (short for her Native American name Pyetwetmokwe), who spent her childhood on the Osage reservation in Pawhuska, Oklahoma, and is passionately driven to popularize Indigenous cuisine.

“Our food matters. As a chef, I started really circling back to my heritage and really wanting to learn more,” said Pyet, who studied at the Le'Cole Culinaire in Kansas City, has a certification in wellness and nutrition, and started a personal chef service called Pyet’s Plate in 2016.

“I do Indigenous fusion food,” Pyet said. “I take both of my cultures, combine them together, and educate my clients and people that are open to learning about how important these ingredients are to us. “

She’s maintained her sense of pride and responsibility through hard times that could have caused a less resilient and resourceful personality to give up on their goals. Pyet has been homeless a handful of times, most recently after a breakup in 2019.

But instead of being bitter, she has a fresh and balanced perspective. Pyet said on the show that if she wins the competition, she plans to buy a bigger car so she’ll be more comfortable than she was living in her tiny Kia, if her fortunes take a turn for the worse in the future.

“You have to take it with a grain of salt. It's life and things happen and things are temporary,” she said. “You have your highs and your lows.”

During this current high point, Pyet is pouring all of the skills and lessons she’s amassed into Next Level Chef,  a high-concept show which takes its title seriously.  The 15 chosen chefs — a mix of home, social media, and professional cooks — push their talents to the limit while facing themed time-crunch challenges in one of three kitchens stacked on top of each other and accessed by elevator.

The top kitchen is a gleaming  stainless steel dream stocked with state of the art appliances and equipment. The middle kitchen resembles a standard issue commercial kitchen. And then there’s the basement kitchen that’s also known as “the dungeon.” It’s a dingy, bare-bones space with tools of questionable quality and cleanliness and ovens that Ramsay jokes “are older than Martha Stewart.”

“That kitchen didn’t really scare me that much,” Pyet said. “You have to really be creative in there. If you don't have that creative flair to be able to improvise and make something happen, then you're destined to fail down there.”

So far, Pyet has only been banished to the basement once. It was for an Italian food challenge, and she whipped up a meatball dish with breakfast sausage and crispy squash blossoms.

The chefs have no idea which kitchen they’ll be using in each episode. Adding to the anxiety and unpredictability is the traveling ingredient platform which descends from the top, where the lucky chefs at the top-level get the best of the bounty, all the way down to the basement,  where it arrives picked-over and sparse, with the least-wanted ingredients.

When it makes its brief visit, platform panic erupts.

“You have 30 seconds to pick your ingredients and it’s just pure chaos. It's super stressful, considering the stakes are very high,” Pyet said. “All of us go into each competition thinking we have it and we know what we want to make, and then none of those ingredients are there. So you're like, what is Plan B?” 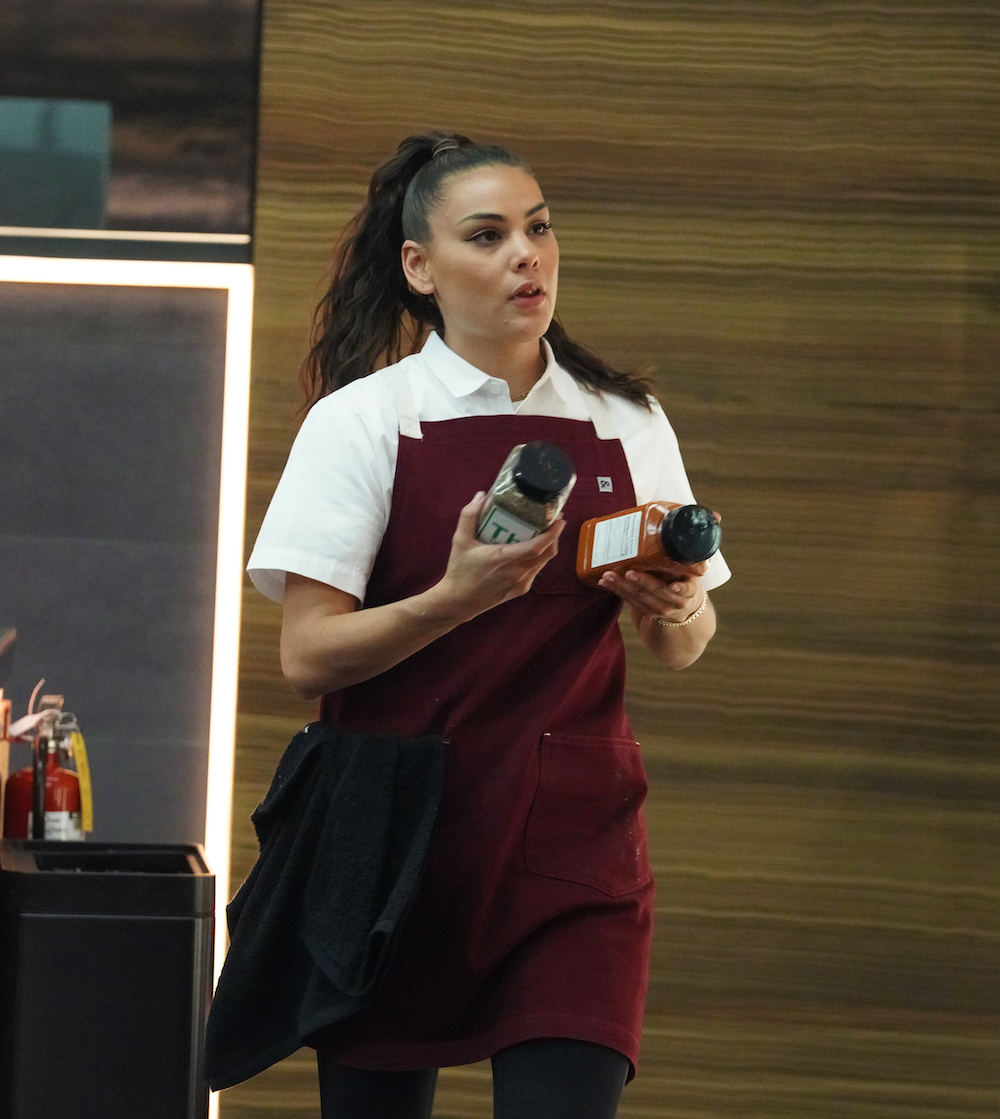 “You have 30 seconds to pick your ingredients and it’s just pure chaos," Pyet said. "It's super stressful, considering the stakes are very high."

If Pyet had the power to select the platform ingredients, she knows exactly what she’d pick.

“Definitely a plethora of different species and types of squashes and lots of corn, whether it be cornmeal, corn on the cob, blue corn, or Hopi corn, which has a hint of purple. The color pop on the plating would just be beautiful,”

When Pyet gets to play and plate by her own rules, and not Gordon Ramsay’s, she concocts dishes rich in Indigenous essentials.

Through her personal chef service Pyet’s Plate, she lavishes her clients with masterpieces of Indigenous-Latin fusion like  bison and sweet potato empanadas paired with creamy avocado salsa, and a three sisters salad with cold smoked cedar chips.

One signature dish that clearly defines her is a baked chorizo and corn-stuffed squash blossom with crumbly cotija cheese and honeycomb.

“It’s kind of like this spicy sweetness. That’s a dish my clients really love and it’s the essence of the fusion of my cultures,” she said. The corn is a staple in both of those cultures, because that's what we had access to, and then you have the chorizo, which is Mexican influence.”

Enriching her clients about the origins and importance of Indigenous ingredients is always part of Pyet’s recipe.

“While I'm serving the food, I teach the story of what the three sisters are, what they represent for Indigenous people and how important the squash seeds and corn kernels  were for our survival and how we used to gift them to each other,” she said.  “I think it's remarkable, given where I come from, to be putting these dishes in front of millionaire, super-sophisticated people. I'm incredibly proud to be able to represent Mexican Americans and Native Americans.”

Next Level Chef airs Wednesdays at 9 p.m. on Fox. For more about the show, click here.