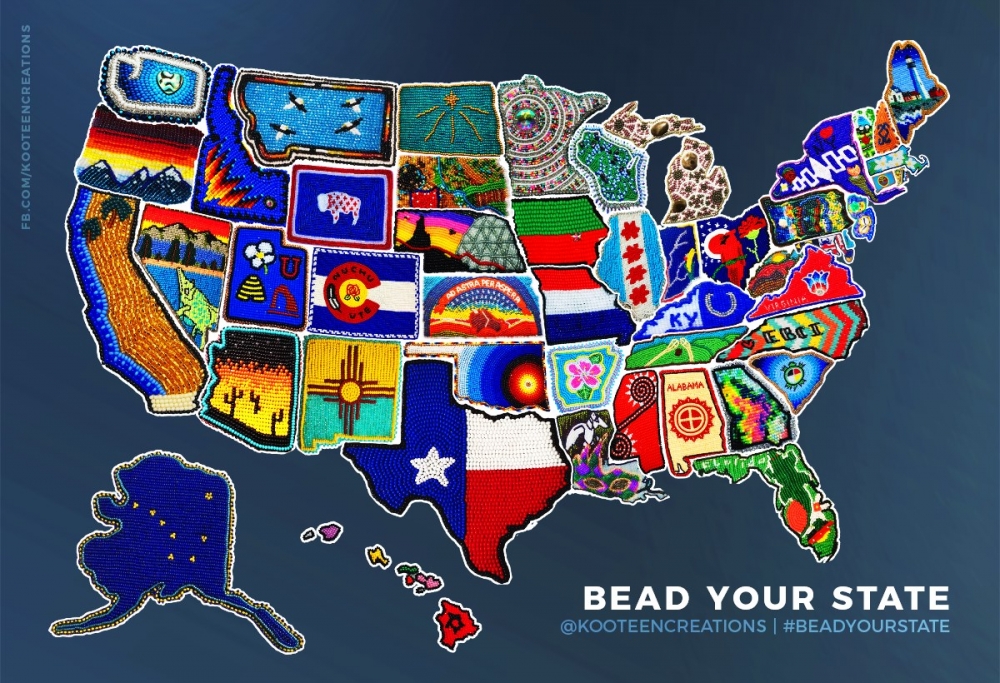 To boost beaders craving a creative purpose during pandemic isolation, the Tlingit and Dakota artist conceived the Bead Your State and Bead Your Province projects, with the goal of making entirely beaded maps of the U.S. and Canada.

Johnson introduced the challenge on her Kooteen Creations Facebook page, and over the following months amassed an intricate and imaginative array of candidates for the map. All of the entries were featured on the Facebook page, where beaders complimented and encouraged each other in the comments.

“If there were multiple submissions for any state, province or territory, we all voted on them,” Johnson said. “I wanted the beaders to be involved from the beginning to the end. For some people, this project helped them get out of bed some days.”

Five months after the project took off, the maps are complete, and are being seen and appreciated by hundreds of thousands of people.

“This project solidified the fact that when we come together to work towards a common goal, we can accomplish anything,” Johnson said. “Our culture and traditions have always gotten us through hard times. We have the blueprint to overcome hardship in our DNA. It's been time tested by generations of our people and guess what? We're still here.”

Johnson beaded the map's blue ombre Washington, which has an abalone heart radiating the love and sense of community permeating the whole project.

Native News Online picked a handful of the map’s stunning pieces to offer a glimpse of the brilliant beadwork and the artists’ state of mind. 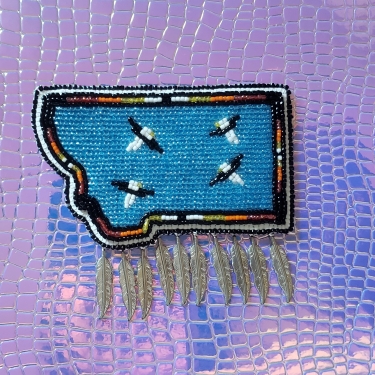 State statement: “‘Mikisow's Montana’ is the title and part of the inspiration is my oldest son Mikisow, Bald Eagle. I had designed a pair of earrings in honor of him with eagles. For the Montana design I did four eagles: one for my daughter, two for my sons, and one for my nicimos (sweetheart), John, and I added feathers to the bottom to tie in with the theme. I did the light blue background to honor the state’s nickname the ‘Big Sky Country,’ and I used red, yellow, white, and black beads to honor the medicine wheel and all that it represents. The orange is for our Elders who survived boarding schools, as a nod to Orange Shirt Day. At the time I did it I was already at home for a month and was in a slump, so it did give me something to focus attention on and I definitely felt proud of myself for completing the project. I am in awe of everyone's creativity. It started out as a challenge but it's turned into something bigger and more meaningful. It shows how alive and well our traditions and cultures are in 2020.” 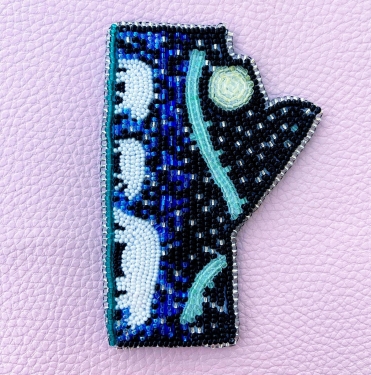 Province proclamation: “The title is ‘Loor blaan aantsoor lii chiiraan’, which is Michif for ‘Polar Bear Underneath Northern Lights.’ I decided to do polar bears and northern lights for this piece because Churchill, Manitoba is known for polar bears. The moon is placed over Churchill to circle where it would be on a map. As I started drawing the design, it brought back many memories. When I was a young girl I remember seeing the northern lights and being afraid of them. It is actually one of my favorite memories of my late father. He picked me up and held me close and began to tell me about the northern lights. He passed in a motorcycle accident in 2018 and I had to include the northern lights as a tribute to him. In a sense, this piece gave me peace. It brought me closer to my culture, my ancestors and my family, helped me begin to find myself, and gave me a sense of community and friendships along the way. We are forever connected.” 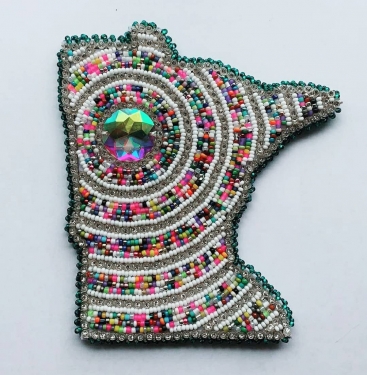 State statement: “I was born and raised on the White Earth Reservation in Ogema, Minn., and the glass gem represents my home on the Reservation. I love the bling in my work. The circles coming from the gem are a way to describe how we may leave home to pursue things such as work, school, or even travel, yet our heart will always remain home. This project made staying at home 24/7 bearable. Seeing everyone build each other up and complimenting each other was very encouraging for me as a new beader. It was great to see how we all bead different ideas yet it seemed to come together and the map looks amazing.” 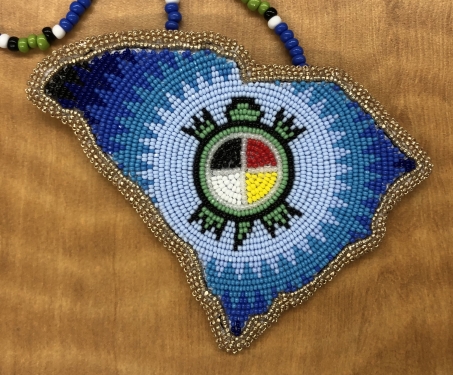 State statement: Lita Sheldon, bearer of the title ‘Bead Kween,’ boasts five beaded states on the US map: Alabama, Connecticut, Maine, South Carolina and Virginia. “I wasn't aiming to be the Bead Kween. It was just a happy accident. It looked for a while like there wouldn’t be enough people to submit beadwork for all the states. And I thought, ‘well I’m not doing anything, I’ll do another one, and another one,’ and then towards the end of the challenge, there were so many people submitting really great beadwork. I would have done Washington state, but there were already several submissions of it. I’ve never been to any of the states I beaded. It was fun learning about the tribes in each.  For South Carolina, I borrowed the turtle design from the logo of the Catawba Indian Nation Family Services Department. Eventually, the community service coordinator at Catawba Nation bought it for $100. I love CeeJay Johnson for coming up with this project. It was loads of fun. She is so supportive and she values beaders.” 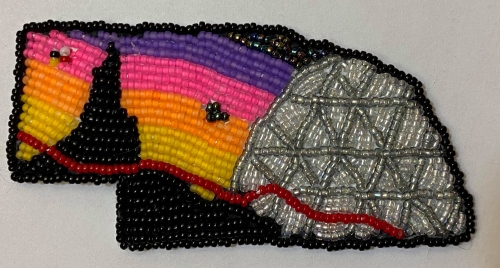 State statement: “I decided to incorporate some of Nebraska’s well-known landmarks. In the west is Chimney Rock, probably the most known symbol of Nebraska. In the northwest are the four directions locating the spot where Chief Crazy Horse was killed at Fort Robinson. In the center in green, is the world's largest hand-planted forest. In the east is the Desert Dome at Omaha’s Henry Doorly Zoo, the world's largest indoor desert. I did the Oregon Trail in red to represent the blood spread because of it. Finally, I chose sunset colors because Nebraska has the best sunsets… I started beading during quarantine. Beading is medicine.”