GILA RIVER INDIAN COMMUNITY — Tribal citizens and boarding school survivors filled the Gila Crossing Community School near Phoenix on Friday, as senior officials from the Department of Interior held the fourth listening session on the yearlong Road to Healing Tour.

During his introduction, Lewis made the point that he was welcoming the Road to Healing Tour because there is no need to be silent about what happened in Indian boarding schools any longer.

“Through our collective voices, we will raise awareness and we will make change,” Lewis said. “And we must because we have to continue to do everything we can to heal prior generations and to protect our children and our communities. Ongoing policies, even today threaten our beautiful, precious native children, like efforts to overturn the Indian Child Welfare Act (ICWA) by those who are still trying to remove our children from our families and our tribal communities.”

Arizona state officials including Governor Katie Hobbs (D) and U.S. Rep. Ruben Gallego (D-AZ) attended the event, as did Deb Parker (Tulalip Tribes), chief executive officer of the The National Native American Boarding School Healing Coalition (NABS). Haaland said Hobbs was the first governor to attend a Road to Healing event, and thanked her for being there.

Haaland also thanked boarding school survivors and their descendants for their willingness to share their stories, however painful that might be.

“You're not here to listen to me. I'm here to listen to you. Your voices are important to me. And I thank you for your willingness to speak to the pain in sharing your stories with us,” Haaland told the crowd. “Federal Indian boarding school policies has touched every single indigenous person I know. Some are survivors, some are descendants, but we all carry the trauma in our hearts.

“The healing that can help our communities will not be done overnight. But I know that it can be done. This is one step among many that we will take to strengthen and rebuild bonds within Native communities.”

Assistant Secretary Newland said the U.S. The Department of the Interior has determined that 47 of the federal government's Indian boarding schools were or are located in the state of Arizona.

He and his staff visited the closed-down Phoenix Indian boarding school recently in preparation for Friday’s listening session. The school was part of a federal government policy to assimilate and strip Native children of their culture.

The Phoenix Indian Boarding School opened in 1891, and was run by the Bureau of Indian Affairs until 1990. At the establishment of the school, Indian Commissioner Thomas Morgan said, "it's cheaper to educate Indians than to kill them."

Newland invited members of the audience to share their stories about how Indian boarding schools affected the lives of their families and communities.

“We know that our federal records and documents can only tell so much of a story. And then your words and your experiences are crucial to telling the whole story, not just for  the federal government, but to the American people,” Newland said.

With the members of the media present, about six different individuals shared their stories. Most were descendants of those who attended Indian boarding schools.

April Ignacio (Tohono O’odham Nation) said she was providing testimony on behalf of her family, which has had five generations of boarding school attendees and survivors.

“Although I understand that this tour is specific to the federal boarding school system, I think it is important to state that the federal government was funding mission church schools and giving Christian religious groups jurisdiction over tribes in the late 1800s until the 1960s,” Ignacio said.

She testified that one of her grandmothers had her tongue split in two, causing it to bleed for hours, because she spoke in her O’odham language.

Pershlie Ami (Hopi), 67, attended the Phoenix Indian School. She recounted how when she was in the seventh grade, she signed up for an “outing” so she could leave the school premises and perform cheap labor for non-Native families.

“A family came and picked me up and took me to their home. The task that they wanted me to do was pick up dog poop in their house,” Ami said.

Ami says she refused to clean the house and was severely punished. She was never allowed to go out on another outing.

Arizona Governor Hobbs listened to the testimony for over an hour.

“I think this is a good thing Secretary Haaland is doing here,” Governor Hobbs told Native News Online during the event. “It is a time for healing. This will work towards healing.” 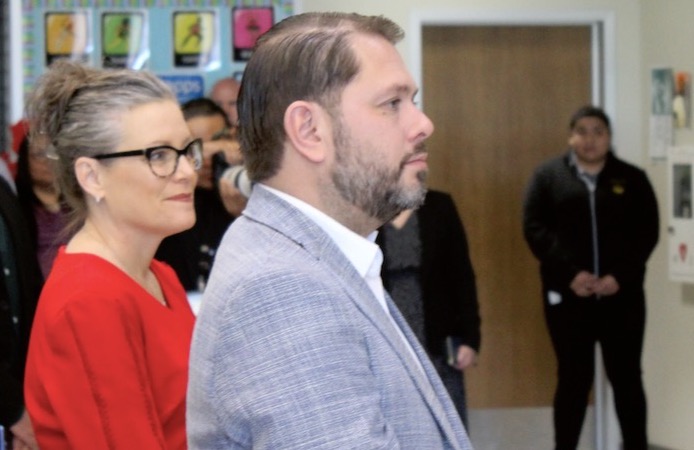 NABS CEO Parker told Native News Online the listening sessions are an important part of the healing process. They’re needed to help Native people and communities overcome the historical trauma that exists because of the boarding school experience.

“The first step is listening,” Parker said. “Folks are feeling like they finally have someone to tell their story to with Secretary Holland and her staff. So, this is really groundbreaking.”

Friday’s listening session was one of two listening sessions for The Road to Healing Tour. The second is scheduled for Sunday, January 22, 2023 at 10 a.m. - Mountain Time on the Navajo Nation at Many Farms High School, N Highway 191, Many Farms, Arizona

Trauma-informed support will be available on-site during the Arizona events.