Repatriation Conference: The Promise and Peril of Paleogenomics 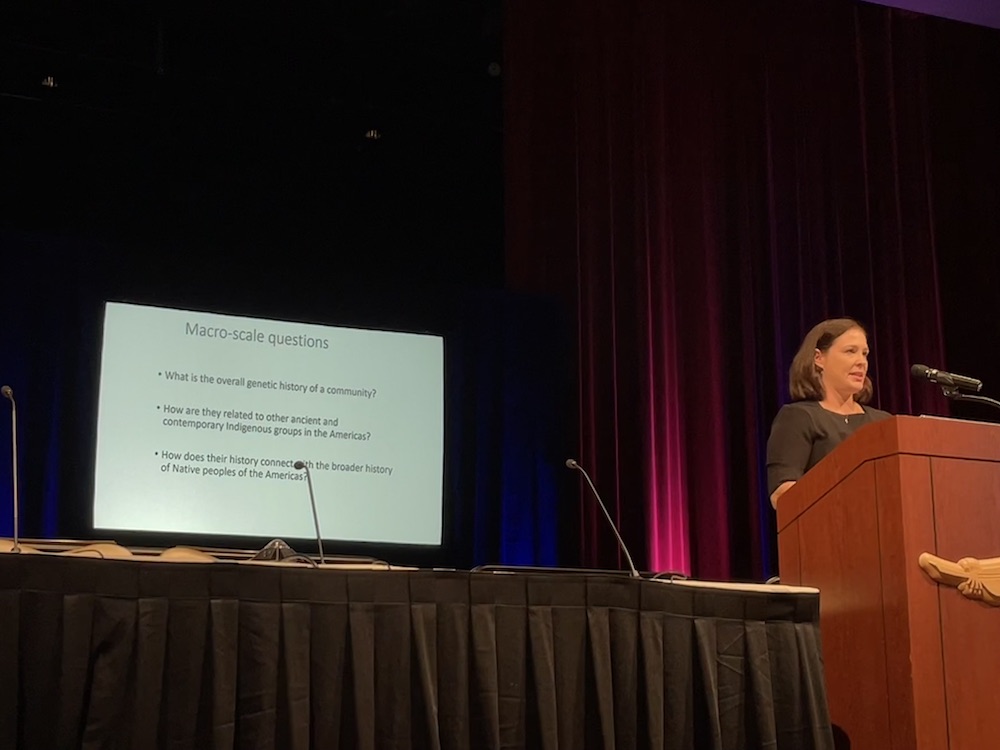 NEW BUFFALO, Mich.—Paleogenomics, the study of ancient ancestors’ DNA to understand the past, is a practice with a fraught colonial history.

That’s because DNA analysis of Indigenous people by non-Indigenous people was done mostly without the consent of living tribal relatives, and  served to perpetuate harmful stereotypes against Native peoples.

Jennifer Raff, a professor in Indigenous studies with a specialty in genetic research at the University of Kansas, believes that paleogenomics have both promise and peril.

“Ancient genomes give us an extraordinary understanding, and powerful way to understand the past and to understand specifically the biological histories of humans, of nonhumans, of entire ecosystems,” said Raff, who spoke Wednesday as a keynote speaker at the Association on American Indian Affairs conference on repatriation. “Like any other tool, paleogenomics can be used for good purposes and it can be used for bad purposes. It can be positive and empowering, or it can have unintended harmful consequences, even when it's employed by people who are well meaning and well-intentioned.”

Here is a recap of Raff’s speech on the power, shortcomings, and process of analyzing ancient DNA from ancestors. Her comments have been edited and condensed for clarity.

What can genetics tell us about the past?

“DNA can tell us about the biological relationships between individuals living in the present and the past. So the evolutionary forces that act on all life on Earth—natural selection, genetic drift migration, mutation—these all change the genetic composition of populations over time.

“We can also even learn about things like tuberculosis and other infectious diseases and where they came from. And we can learn about the relationships between nonhumans and humans. For example, dogs, and how they are related to the indigenous peoples and the populations with whom they traveled.”

What can’t DNA tell us?

How does the process of extracting and reading DNA work?

“We first take a sample from the ancestor, and this can be either a small bit of bone or tooth or hair. We can also obtain DNA from soil and some and sometimes from artifacts. The amount needed is 50 milligrams, and that's the approximate equivalent of a pinch of powder for each extraction.

“That much disturbance of an ancestor’s remains is completely unacceptable for some descendants, so that alone takes it off the table. There are some methods for trying to get ancient DNA without actually taking that powder sample, but they're a little bit unreliable.

“So the sample from the ancestor is treated to remove any contaminating DNA from the people who may have touched it, for example, museums. Then it is chemically treated, which releases DNA from the sample. You basically come out of it with a little tube full of liquid that has DNA in it. We take that resulting liquid that contains the ancestor’s DNA and run it through a column that contains silica. The DNA binds to silica under certain conditions, and that allows us to wash it with multiple buffers to clean away the soil, chemicals, and any other chemicals that might be there that could interfere with the sequencing process.

“Depending on how much DNA we have, we can either just sequence it outright and just sequence the whole genome. The DNA sequences that we get give us a literal readout of all the A’s, G's, T's and C's in that genome, but they're in a bazillion different random fragments, and so they have to be sorted. Once you have the genome assembled [into order], then you can begin to analyze it.”

How can DNA be used as a tool for repatriation, and what are the problems with this?

“It may also privilege DNA as a tool for assessing relationships over cultural knowledge and traditional knowledge and that is also a problem. And I say this as a geneticist. So the other thing I'm concerned about is, if using DNA for repatriation claims becomes common, will this widespread use set an expectation for DNA study and repatriation claims? I don't know that it will. But if it does, what about those tribes for whom DNA research is off the table because of its sacredness? Does that mean that they have less opportunity? And again, also, the results of DNA study may not match traditional knowledge traditional cultural historical knowledge. It can't be reliably used to determine tribal affiliation necessarily.

“I worry about using biological criteria, but I also am heartened by any tool that can strengthen repatriation.”

What is the ethical debate around paleogenomics?

“Expertise in ancient DNA does not make you an expert on bioethics. And I include myself in that category. Diné geneticist and bioethicist Kristal Tsosie pointed out … that being a paleogeneticist creates a conflict of interest when it comes to ethics, because [paleo geneticists] benefit from the research products, and she is absolutely right.”

What are some ‘best practice’ considerations, and questions to consider if you’re a tribe interstate in pursuing DNA analysis?

“The first consideration is consultation. How would the tribe like to be consulted? This is different in every project I am involved with.

“The research design is another big question and I think it is very helpful for tribes to figure this out in advance at least what their priorities are.  Because when I go to a tribe, I will come to them with specific questions I might be interested in, but I want to know what they're interested in. What do you want to know about the past? What do you want to know about these ancestors? And we build both sets of questions into the research design, unless the tribe does not like my questions. If they don't want to address the same kinds of questions that I want to, we take those off the table.

“This is a big one. So the DNA extraction and retrieval process is destructive, but there are products that are left over from that process. So you will have a little bit of DNA sample left. And so what should be done with that? There are options: it can be thrown away or destroyed; (or) it can be returned to the community to be buried with the ancestor.

“The other thing that I'd like you to keep in mind as decision makers or advisors is that the process of sequencing DNA generates huge amounts of data. The standard practice and academia, and one which your research partners may push for, is to publish the raw data open access, free for anybody to use. Anybody can do any kind of future research with them.

“There's some options: you can go with the open access model, you may also say no access. Then there’s a middle ground where the tribe has oversight over the kinds of research that is done with their DNA.”

If you’re a tribe considering the use of paleogenomics, how do you choose a trustworthy research partner?

“Then of course, ask other tribes and ask archaeologists and ask repatriation specialists about the reputation. The ancient DNA community is not very big, and so we all have reputations.”

In concluding her remarks, Raff said that she’s seen the field change significantly—and for the better—in just the last few years.

“We have a really long way to go. We are not where we need to be. There are setbacks, there are bad actors, but we are actually heading in the right direction,” she said. “I am very positive about this. So empowering tribes as decision makers in this process is the path forward.”