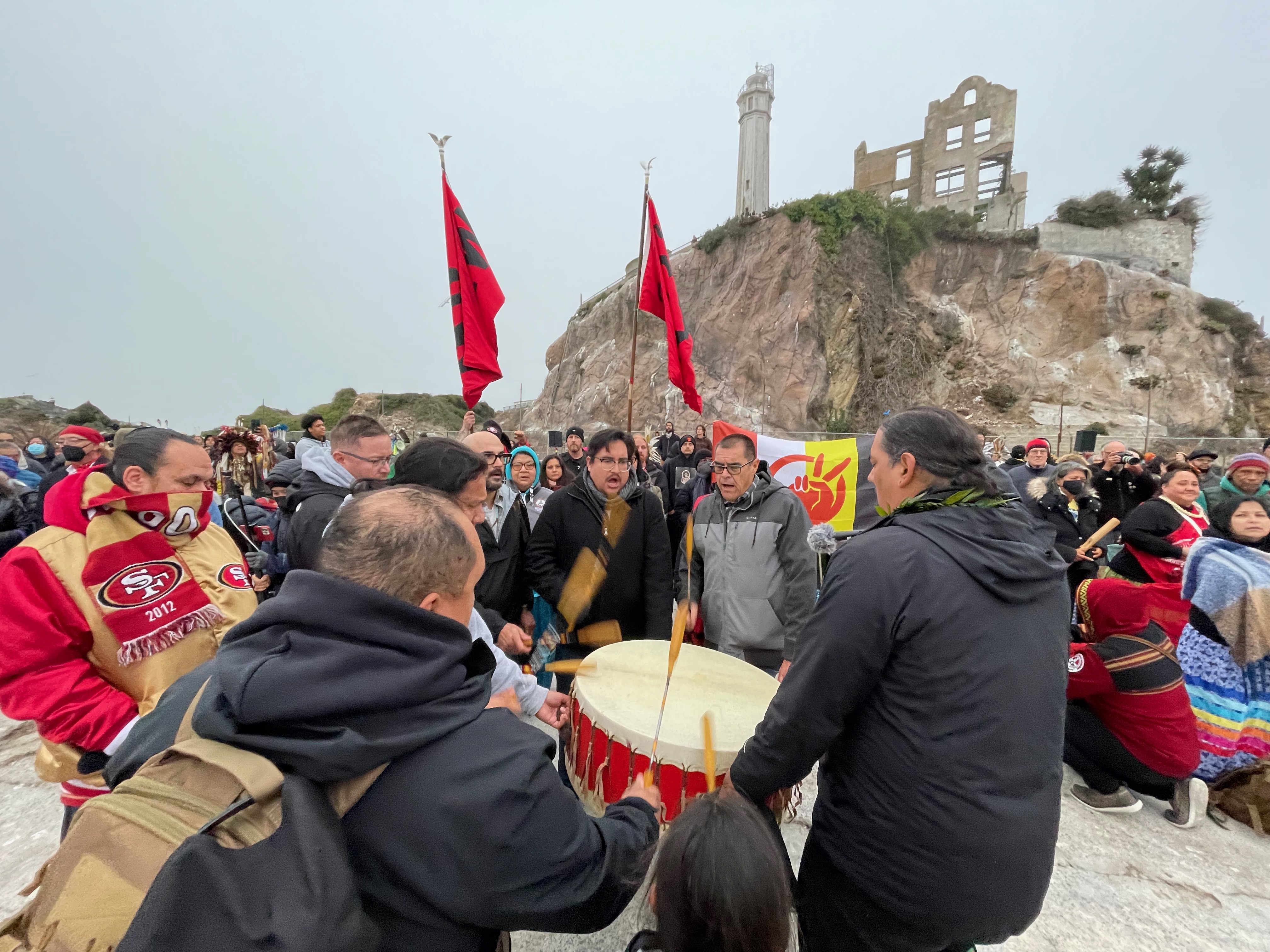 SAN FRANCISCO — On Monday, Oct. 10, Tribal Nations friends and family convened on Alcatraz Island for the annual Indigenous Peoples Day Sunrise Gathering to acknowledge 530 years of resistance to genocide, honor those who have passed on and celebrate all who continue to fight for Indigenous people.

The event, hosted by the International Indian Treaty Council (IITC), has been held since 1975 to commemorate the 1969-1971 occupation of Alcatraz by the Tribes of All Nations, which kicked off the American Indian Civil Rights Movement.

With a significant gaming initiative on the November ballot that, if passed, would negatively impact contracts already agreed upon between most of the Tribal Nations in California and the State, this year’s Sunrise Gathering was significant for members of California’s tribal nations.

IITC  executive director Adrea Carmen (Yaqui) began the morning by welcoming the crowd of thousands to the annual prayer gathering.

“We welcome all of you to join us on this beautiful morning on Alcatraz as we gather together to acknowledge our special day, Indigenous Peoples Day,” Carmen told the crowd. “We will not say the ‘C’ word while here today.”

A bear dancer was brought into the circle to heal and protect the people and their homelands.

Radley Davis (Winnemem Wintu, Pit River Nation) offered the morning prayer and said, “I want to acknowledge all frontline defenders here today and ask you to keep us in your prayers. We have been defending land and water in the courts at Medicine Lake against a large industrial geothermal development on Mt. Shasta. We have won several cases but still have a long way to go. I ask that you remember the daytime and the nighttime and bless yourselves around this fire while here. May we all sit together and lift each other up.”

The Shingle Springs/Muwekma youth group danced as participants entered the circle. Gregg Castro (Ramaytush Ohlone) spoke before sunrise with a prayer and uplifting greetings for all.

Morning Star acknowledged that for 20 years, the Path Star organization has sponsored Lakota women to swim two miles from Alcatraz to San Francisco to raise awareness of diabetes on reservations and urban areas.

Participants heard from Francisco Herrera, who led the struggle for California farm workers to unionize. California congressional bills AB 2183 and AB 2022 were signed into law in September after their long walk from the Central Valley to Sacramento.

Uilani Wesley (Hawaiian from Oahu) offered her grandmother’s chant as a blessing to her ainu and those of us on California’s tribal lands.

Award-winning Dakota flute player Cody Blackbird offered a flute song and encouraged the crowd to be active in the preservation of Native culture.

“This is my first Indigenous Peoples’ Day Sunrise gathering, and I want to encourage youth to collect as many stories about your elders as you can, so you don’t forget language, culture, and history,” Blackbird said.

Many who participated in the original occupation of Alcatraz were honored, including Fawn Oakes (daughter of Mohawk activist Richard Oakes), Nadia Bratt, Eloy Martinez, Fred Short, Tony Gonzalez among others.

All Nations drum group sang and drummed for exhibition Pow Wow dancers led by Mike Bellanger (Sauk/Fox). Bellanger was acknowledged for his 40 years of teaching and drumming.

“Sacheen Littlefeather sacrificed so much in her life,” Antoine said. “She had to give up her career after accepting the award for Marlon Brando. I was with her for five hours before she passed, and we laughed and talked stories together. She gifted me with many items that I will re-gift.”

Photographer HJ Tsinhnahjinnie (Bear Clan of the Taskigi Nation/Sinajinnie Clan of the Diné Nation) said of Littefeather, “Her actions that day, 50 years ago, saved those warriors fighting on the Pine Ridge reservation.”

This Sunrise Gathering acknowledged and uplifted all the women and men, past and present, who continue to remember their relatives, share culture and history, and continue to fight for the rights of Indigenous people today.