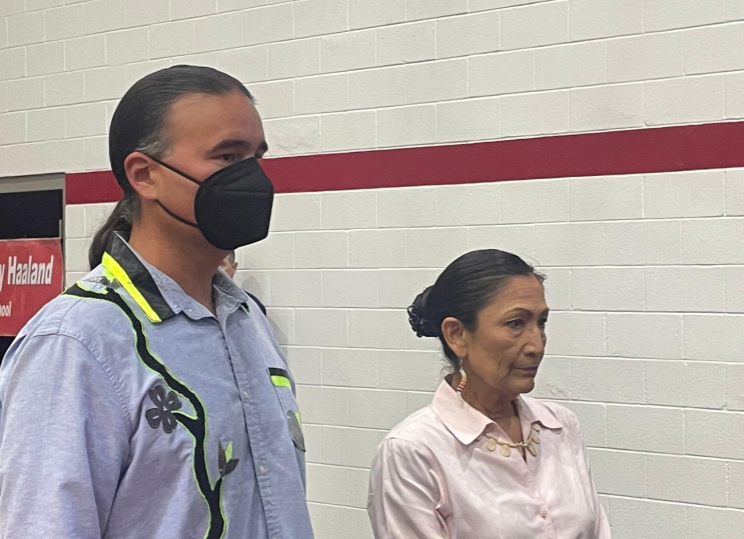 HARBOR SPRINGS, Mich. — The second stop on the Road to Healing tour by U.S. Secretary of the Interior Deb Haaland (Laguna Pueblo) and Assistant Secretary of the Interior for Indian Affairs Bryan Newland (Bay Mills Indian Community) will visit the lands of the Little Traverse Bay Bands of Odawa Indians in the northern part of the Michigan’s Lower Peninsula on Saturday, August 13, 2022, at 10:00 a.m. - EDT.

The Road to Healing is a year-long tour across the United States to provide survivors of the federal Indian boarding school system and their descendants an opportunity to share their experiences. The Road to Healing tour began at the Riverside Indian School in Anadarko, Okla. on July 9, 2022

Little Traverse Bay Bands of Odawa Indians Chairwoman Regina “Gina” Gasco-Bentley told Native New Online that she was told by planners from the Interior Department to expect a crowd of 500 at the Pellston Public Schools, 172 Park Street, Pelltson, Michigan.

Since the Little Traverse Bay Bands of Odawa Indians is the only tribe selected for the tour stop in the Great Lakes region, tribal communities from midwest states will be in attendance on Saturday. Tribal representatives who attended the Midwest Alliance of Sovereign Tribes (MAST) summer meeting earlier this week told Native News Online they would be in Pellston to share their stories.

“We have been working with the Interior Department for weeks in preparation of the event,” Gasco-Bentley, who is a survivor of the Holy Childhood of Jesus School (Holy Childhood) that operated in Harbor Springs, Mich. until 1983.

Holy Childhood, one of the longest operated Indian boarding schools in Michigan, once housed hundreds of American Indian students from throughout the Great Lakes region. The school is now gone because it was demolished in 2008. 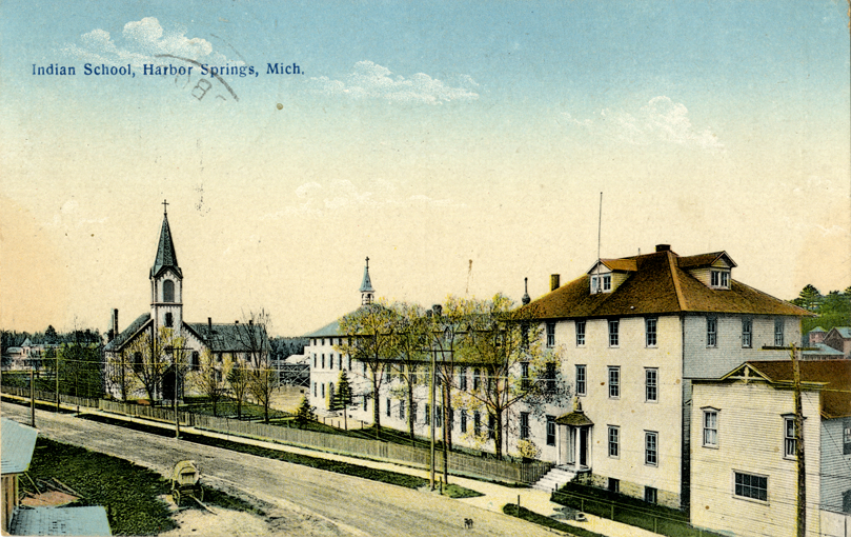 Holy Childhood School in Harbor Springs, Mich. (Photo/Detroit Public Library Digital Collections)The school can trace its roots back to a request from members of the Odawa tribe sent to Congress in 1823 when the group expressed a need for a “teacher or minister of the Gospel.” The request was fulfilled in 1829 when a small church with a school was built. The school ran out of funds and was closed from 1839 -1884. Reopened in 1884 by the Franciscan Fathers of Sacred Heart of St. Louis, the school operations were transferred to the School of Sisters of Notre Dame in 1886.

Holy Childhood became officially part of the federal government-funded system of Indian boarding schools in the mid-1880s, according to Eric Hemenway, director of archives and records Little Traverse Bay Bands of Odawa Indians.

During the 1920s, the school lost its government funding, but stayed open through funds from the Catholic Diocese of Gaylord, based in Gaylord, Mich. and other fundraising efforts.

While Holy Childhood was an Indian boarding school, some Caucasian students attended the school during the day and went home at night. The American Indian students stayed at the school at night and would not see their parents or guardians for months at a time.

It may be impossible to know the accurate number of students who attended the school because of a fire that destroyed many files during a fire at the church’s rectory during the 1970s. According to archivist Hemenway, some student records are housed at an archive at Marquette University in Milwaukee and some are stored at the Diocese of Gaylord.

Other Indian boarding schools that operated in Michigan were the Mount Pleasant Indian Industrial Boarding School (1893 - 1934) in Mount Pleasant and Holy Name of Jesus Indian Mission (1843 - 1954) in Baraga.

Other Road to Healing tour visits will include sites in Hawai’i, Arizona, and South Dakota during 2022. More states will be announced for the tour for 2023.