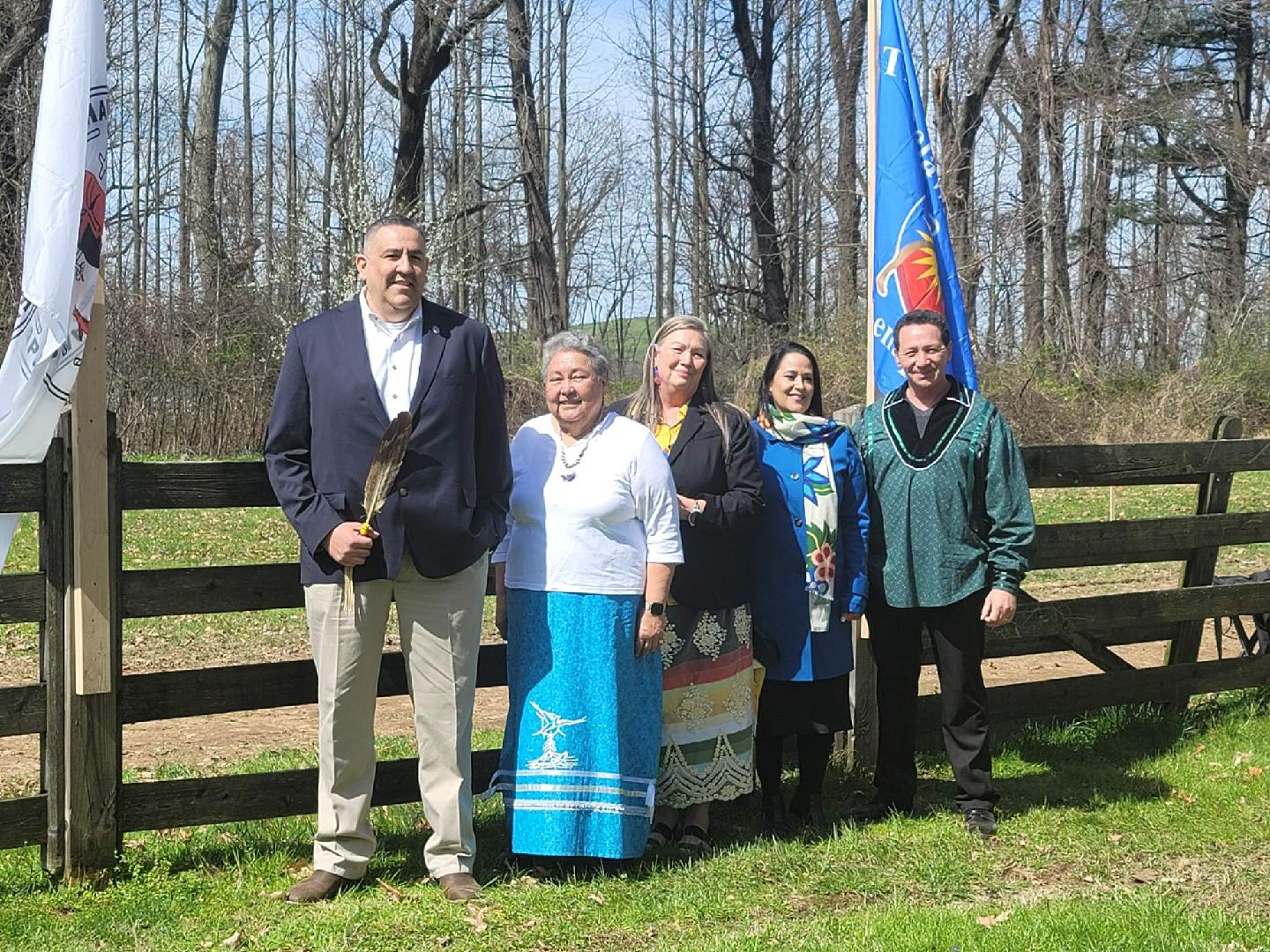 The remains of approximately 200 Lenape ancestors and associated funerary objects that had been held by universities and institutions across the country were reinterred to final rest on their homelands near Philadelphia on April 11, after being returned to the five Lenape tribes.

All of them had been dug up from a ceremonial burial area in New Jersey between the late 1800s and the 1980s, said Susan Bachor, the Delaware tribe’s deputy tribal historic preservation officer. The human remains were then given or sold to individual collectors, universities, and institutions, where they remained for decades, some for over a century.

“It was very historic for all five of the tribes to be together in our homelands at the same time, and it was a sad and happy day,” Delaware Nation of Oklahoma tribal President Deborah Dotson told Native News Online. “It was sad because of what we were doing. And happy because we could all be back together and that we can put our ancestors to rest.”

On April 11, after nearly 15 years of coordinated work between Lenape tribal historic preservation officers to track down their ancestors’ remains, the tribes successfully reinterred them at the Pennsbury Manor in Bucks County, north of Philadelphia. The Pennsbury Manor is the reconstructed home of William Penn, the Quaker founder of the Pennsylvania colony, who negotiated for Delaware lands in the lower Delaware River valley.

“The Delaware Tribe believes in repairing these individuals as close as possible to their original resting place,” Bachor said. “So that's why Pennsbury Manor was chosen.”

The institutions returning the Lenape remains included the Phoebe Hearst Museum of Anthropology in Berkeley, California; the Field Museum in Chicago; the Robert S. Peabody Institute of Archaeology in Massachusetts; the Peabody Museum at Harvard University; the American Museum of Natural History in New York City; Temple University; the University of Pennsylvania; and the New Jersey State Museum.

Bachor, whose office is based at East Stroudsburg University in Pennsylvania, said that each Lenape tribe’s increased presence on the East Coast quickened the repatriation process.

“The word got out that this was happening,” she said. “​​When (people) found out that we were looking for individuals from this particular location, I started getting phone calls.”

“I know the tribe had [faced] resistance in the past,” Erin Paden, historic preservation director of the Delaware Nation, told Native News Online. But in her two years of working on this repatriation project, she said, she only had positive experiences working with museums and institutions.”

“It was peaceful,” she said. “It was just a real sense of fellowship.”

Dotson told Native News Online that working together for the repatriation had built closer relationships among the five Lenape tribes.

“So now we're going to keep having those monthly calls so that we can talk about things that are going on in the tribe,” she said.

On her trip to Pennsylvania last week, President Dotson also visited the only officially recognized Native burial ground in Chester County, south of Philadelphia, which the tribe just purchased from a private owner for $1.

The owner, Carol McCloskey, put an ad in the local paper last year to notify Lenape tribes that she was attempting to give them back their historic cemetery. Eventually, all five tribes agreed for the Delaware Nation to take ownership, Dotson said. The tribe’s attorney signed the deed to the cemetery on April 19th.

The Chester County Historical Society in 1909 marked the site, known as Indian Knoll where about 30 ancestors are buried, with a historical marker that reads ‘In the wooded knoll above, sleeping their last sleep, rests the Indian owners of these lands before the white man came.’ A local land trust will help the tribe preserve and protect the land from a distance, Dotson said.