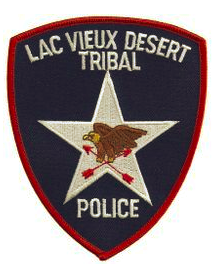 In a move to fight back against increased use of methamphetamine on its reservation located in Watersmeet, Mich., which is in the western part of Michigan's Upper Peninsula, the Lac Vieux Desert Band of Lake Superior Indians (LVD) announced a “Take Back Our Community Campaign” last Friday, July 22, 2022.

In recent years, drug usage has intensified on the LVD tribal lands.

According to the tribe, drug activity has once again reached a boiling point and this time with a bad batch of heroin causing numerous overdoses, which so far have not resulted in deaths.

To put teeth into the Take Back Our Community Campaign, the LVD tribal government met on Monday, July 25, 2022, to determine short and long-term goals and actions to push back against the drugs and drug traffickers attempting to take hold in its tribal community.

The tribal leaders decided by motion on that day to:

“Exclude any non-LVD member from the lands of the Band who is identified as, or comes to be known, as a known drug dealer/user or who is otherwise excluded from any Tribal business now, or in the future, for drug-related activity resulting in the enactment of a resolution related to each identified person containing the specific timeframe for exclusion, special considerations, potential consequences and the process for reconsideration.”

“I have no magic wand, but I know if we work together as a community, we can save lives and make our people healthy again,” LVD Tribal Chairman James Williams, Jr. said.

“The health, safety and welfare of this community is paramount to the future of Tribe, the Tribal Government will not tolerate those who would jeopardize that future by bringing illegal drugs into our community to poison our people,” Williams said to Native News Online.

Reacting to the measures being implemented by the LVD tribe, the Midwest Alliance of Sovereign Tribes (MAST) issued a statement:

“The Midwest Alliance of Sovereign Tribes stand in unity and harmony with these struggles of drug addiction and abuse in the Lac Vieux Desert Band of Superior Chippewa Indians homelands and how they have chosen to attempt to curtail the nasty illegal flow of all drugs into their homes and peoples lives.

It is a very calculated process and direction that other tribal nations have done.  We must all take similar actions and share this information with each tribal government and police department to ensure the dealers and abusers don’t just pack up and head to another tribal nation!”