AAIA Conference Opens in Michigan to Explore Repatriation Through the Lens of Compliance, Advocacy and Activism

NEW BUFFALO, Mich. — Who owns Native American ancestral remains? What’s the spiritual role of repatriating them, and how can the federal government better facilitate their return? These were some of the high-level questions answered at the Association on American Indian Affairs’s 8th annual repatriation conference, which kicked off yesterday in New Buffalo, Michigan. 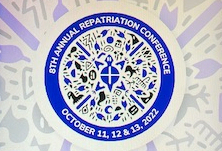 The three-day event, hosted by the Pokagon Band of Potawatomi at the Four Winds Resort and Casino, is centered around daily keynote speakers and panelists who will examine repatriation through the lens of compliance, advocacy, and activism. The conference drew about 200 participants in person, and more participated virtually.

This year’s conference theme: ReACTivating Our Ancestral Connection, draws on the idea that museums, Native communities, and stakeholders must take a holistic accounting of artifacts taken from Indigenous communities—expanding beyond human remains and artifacts to also include intellectual property—and reclaim them.

The first speakers of the day were Ojibwe filmmakers and brothers Adam Khalil and Zack Khalil of the Sault Ste. Marie Tribe. The pair has been working on a documentary film that focuses on repatriation for five years in partnership with the Michigan Anishinaabek Cultural Preservation and Repatriation Alliance, a group that represents the state’s federally recognized and historic Indian tribes.

Zack Khalil said that he and his brother have been working “at the speed of trust” given the sensitive and complex nature of the topic, and prioritizing an Indigenous perspective in filmmaking.

“We're really aware of the ways in which filmmaking practice tends to be this really extractive process that isn't something that Native people get anything out of, or have much control over,” Khalil said. “So when we think about engaging in documentary film production, we want to really think about how to do that in an Anishinaabek way, in a culturally specific way.

“It's a more community-oriented, open ended approach. Not going into an interview knowing exactly what you're going to try to get, but visiting with people, seeing what people on the ground doing the work think is important, and letting that shape the film more than anything.”

Next up, Alaska Native repatriation practitioners Gail Dabaluz (Tlingit/Haida/Tsimshian) and Judy Ramons (Tlingit)—both students at the University of Alaska Fairbanks in the Indigenous Studies Ph.D. program—spoke about the spiritual and cultural significance of repatriating Tlingit items back to Southeast Alaska.

“Our Tlingit epistemology focuses upon a human cosmological cycling,” Dabaluz said on Tuesday. “We acknowledge that when a clan member passes away, their spirit will experience a rebirth in a new clan member.”

Dabaluz also spoke about some tribes’ willingness to adapt and embrace technology when it comes to repatriation, in the form of 3D printing.  Specifically, she said, a wooden clan hat belonging to the Tlingit Dakl'aweidí (Killer Whale) clan of southeast Alaska was kept by the Smithsonian Museum for a hundred years, until 2005. That’s when the museum consulted with the clan leader, who chose (with tribal support) to instead repatriate a replica of the item until the clan can properly take care of the original item.

“I was really happy to see that our tribal community embraced new technology,” Dabaluz  said. “And that's not to say that it works with every single museum: It doesn't. But with The Smithsonian, and the Museum of Natural History, we have a really great relationship with them.”

Alternatively, Ramos offered, she’s seen the 3D printing process work well in reverse: when a museum keeps a replicated artifact and repatriates the original back to a tribe.

Matt Bussler, the tribal historic preservation officer of the Pokagon Band, spoke next about a 10-year long repatriation case that’s completing this year.

In 2014, the Federal Bureau of Investigation’s Art Crime Team seized more than 42,000 artifacts—including about 500 Native American human remains—that an amateur archeologist named Don Miller illegally excavated. As the only federally recognized tribe in the state of Indiana, the Pokagon Band consulted with the FBI on the case.

Several repatriations of human remains followed, Bussler said, but not all of the human remains had identifying information attached to connect them with a certain tribe. As a result, Bussler announced on Tuesday, the Pokagon Band will be repatriating all the remaining culturally identifiable individuals and their belongings, and reenter them within the tribe’s private cemetery.

The last speakers of the day on Tuesday were National NAGPRA Program Manager Melanie O’Brien, and Civil Penalties Investigator David Barland-Liles. The pair, who enforce federal NAGPRA law under the Assistant Secretary of the Interior, explained their role in facilitating the law and explained how they hope to improve it.

Barland-Liles, who was hired 11 months ago as the lone investigator of museums and institutions out of compliance with NAGPRA, said he is seeking ways to ensure that the allegation process is not an inhibitor to repatriation.

O’Brien shared this year’s statistics on museums and institutions that have successfully repatriated their reported collection of human remains and artifacts, versus those who have not yet done so. Of a total 208,000 ancestors reported by museums and federal agencies, about 108,000 ancestors are still waiting to go home.

“I don’t believe the inventories are complete,” one audience member said. “The process doesn't work, because after 30 years there should be a lot more ancestors home. How does your department make consequences and or audits more with more teeth in [them]?”

O’Brien replied that she believes there are probably more ancestors than what’s been reported, based on the reality that every year the total number of reported ancestors increases.

“This is that awkward moment where I have to tell you, after I've committed to do as much as I can, that there are limits to what we can do, unfortunately, and within the scope of the law,” O’Brien said. Changes to NAGPRA must be authorized by Congress, and come from legislative advocacy work.

Separately, O’Brien called attention to certain states and tribal organizations that have impacted their own NAGPRA work.

The state of California in 2001 passed its own California Native American Graves Protection and Repatriation Act, which mandates a deference to tribal traditional knowledge and oral histories as “evidence” for claiming human remains or cultural artifacts.

One tribal representative in California hosts monthly consultation calls for museums that want to consult with her tribe, rather than waiting for a museum to initiate consultation.