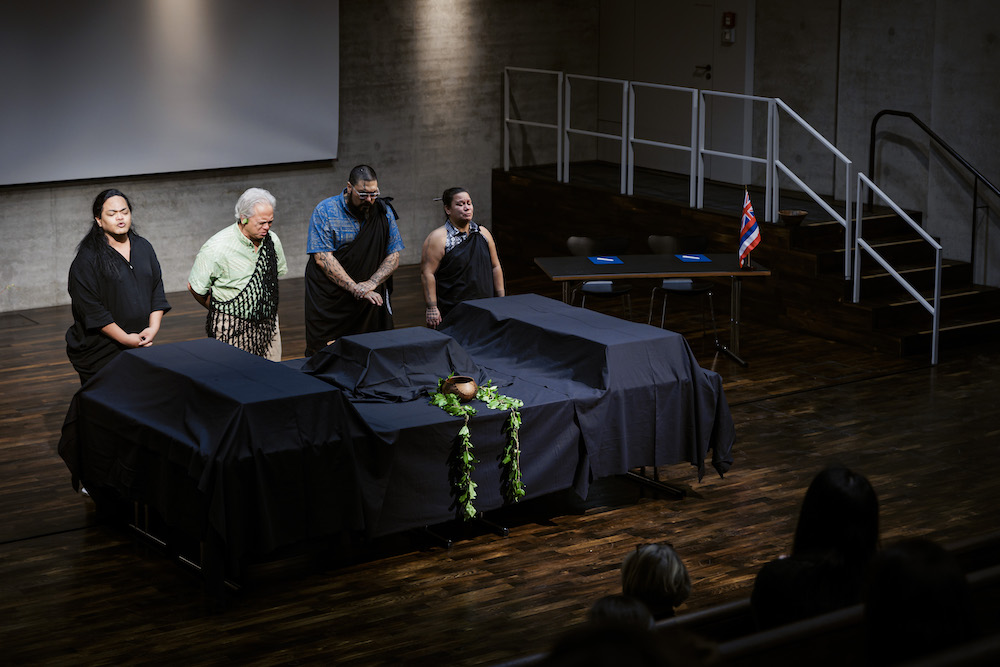 In order to secure the return of 58 stolen skulls of Native Hawaiian ancestors from museums in Europe last month, an Office of Hawaiian Affairs (OHA) delegation appealed to museum employees’ humanity.

“We've been successful because we go around the world asserting our cultural responsibility,” a 32-year-volunteer for OHA’s repatriation efforts, Edward Haleloha Ayau, told Native News Online. “It's not a matter of jurisdiction. It's a matter of duty. And our role is to advocate and convince the person sitting across the table that… if we had your access to remains, you would expect us to give them back, irrespective of the law.”

The iwi kūpuna, or ancestral Hawaiian skeletal remains, were dug up from the ground on several different islands in Hawai'i by “researchers” and professors over 100 years ago. Though records kept by the institutions identified each skull's origin, little to no information was kept on family names of the deceased, or specific information about how each skull got to Europe, Ayau said.

The three-member volunteer group tasked with bringing their ancestors home call themselves Hui Iwi Kuamoo, the Hawaiian word for spine.

“It's the backbone that holds the head up,” Ayau said. “Because it's the one that's doing all the work.”

The 10-day trip took the delegation to four institutions in Germany — Übersee Museum, University of Göttingen, Friedrich Schiller University Jena, and Berlin State Museums of the Prussian Cultural Heritage Foundation — and then to the Vienna Natural History Museum in Austria.

“One thing they all have in common is that (the skulls) were stolen,” Ayau said. “Nobody gifted them grandma's head and said, ‘You can have this, we don’t need it.’”

The repatriation of the iwi kūpuna last month reflects decades of research and outreach by OHA to museums and institutions across the world.

Over the past three decades, Ayau has assisted with 128 repatriations, bringing home at least 6,000 ancestors. The majority of those repatriations have been domestic, and therefore facilitated under the Native American Graves Protection and Repatriation Act (NAGPRA). Enacted in 1990, NAGPRA requires museums and institutions that receive federal funding to catalog and return all Native American human remains kept in their “collections,” plus funerary items and certain cultural items.

But no similar international law exists.

Of OHA’s total repatriations to date, 20 have been from abroad, according to Kamakana Ferreira, the organization’s lead compliance specialist responsible for issuing repatriation claims. Since there is no international law, OHA cites NAGPRA as precedent, Ferreira said, and also includes clauses from the United Nations Declaration on the Rights of Indigenous People, which recognizes the international human right to repatriation.

Though the Hawiian delegation has waited as long as 26 years to successfully fulfill some reparation claims abroad, Ferreira said that the tide seems to be turning.

“A lot of that has to do with newer, more progressive individuals at these institutions that are more sensitive to Indigenous injustices and trying to do the right thing to correct these injustices,” Ferreira told Native News Online.

Proactive repatriations also seems to have a domino effect. As a result of the media attention from last month’s trip, Ayau said another museum in Germany contacted OHA to facilitate repatriation of its own collection of Native Hawaiian remains.

The result, Ayau said, will have a healing effect on the institutions as well as the Native communities.

“It's not just the Natives who have been traumatized by all this,” he said. “The unfortunate situation of the current curators and museum decision makers is that they inherited the sins of their forefathers. They didn’t do it, but they are left to speak to it, atone for it. That takes courage.”

Next month, the delegation will travel to the United Kingdom for two more scheduled repatriations from museums in Northern Ireland and Scotland, plus a final consultation with an institution in London.

The hardest part about the work of repatriation is there’s no way to gauge how much work remains to be done, Ayau said.

“There's no way of knowing how many there are,” he said. “So 120 may seem like a lot of cases, but if there's a thousand, then we’re really just scratching the surface.”

Back at home, Ayau said the 58 skulls will be restored to the condition they were buried in—many of them had been cut in half or drilled by researchers—and returned to be buried on the island where they were originally laid to rest.

“Hawaiian ancestors didn't mate for the purpose of creating osteological material for museums to display,” he said. “That was never one of the purposes. It was to create a loving family. When they put them away, they meant them to stay away.”