What Caused One Tribal Chairman to Call the S.D. Governor a Dictator

Opinion. Critical Race Theory (CRT) is a scare tactic used by conservatives across many states. While CRT is a term generally taught in law school, conservatives use it to stir up their base by claiming that public educators use CRT to make school-aged children feel guilty about the actions of their ancestors—particularly, White ancestors. 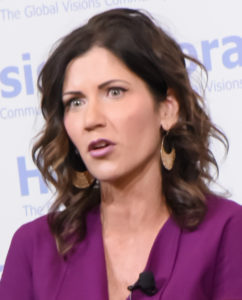 Accompanying the executive order came a statement issued by the governor’s office that suggests Noem feels CRT is part of political indoctrination of students.

“Political indoctrination has no place in our classrooms. Our children will not be taught that they are racists or that they are victims, and they will not be compelled to feel responsible for the mistakes of their ancestors,” Noem said.

Cheyenne River Sioux Tribe Chairman Harold Frazier, who leads one of the largest Native American tribes in South Dakota, says Noem is basically saying that the United States is not responsible for any of its actions.

“I condemn the recent executive order issued by the Governor of South Dakota for all the polished ugliness that it represents,” Frazier said this week. “I can go on being critical of (Governor Noem’s) statement, but I would like to tell you what it means for us. The style of leadership which dictates thought and restricts educators from encouraging critical thinking is not the leadership my people deserve.”

Frazier was not done.

“In true dictator fashion, she is forbidding the educators of our children to hear, speak or discuss critical issues that would enable our future generations to solve the problems in which we have failed,” Frazier said.

The latest gesture by Noem is not the first time she has attempted to inject her right-wing politics into public education in South Dakota. Last summer, tribes protested when her South Dakota Department of Education decided to remove more than a dozen Indigenous-centered learning objectives from the department’s new social studies standards

Back then, Frazier issued a statement that said withholding the state's history from young minds will negatively impact Native youth in the state by relegating Indigenous people to “the bad guy” role in every fantasy about American conquest.

South Dakota Democratic State Sen. Troy Heinert (Rosebud Sioux Tribe) told me during a telephone interview that the irony is that South Dakota’s Senate Education committee killed legislation (House Bill 1337) which would have banned CRT in the state’s K-12 public schools. So Noem dictated an executive order to work around the legislature.

“She jumps right out there with the executive order that says ‘I’m going to do this anyway.’ That tells the legislature that she doesn't think that we are a valuable part of this process. And you know, as a legislator, that doesn't sit well with me,” Heinert said.

I asked Heinert what he thinks the message to Native American tribes in South Dakota is.

“I think her message to us (Native Americans) is that we don't matter, and that the Native experience in South Dakota doesn't matter.”

Heinert also pointed out that CRT is not even relevant to South Dakota because it is not being taught to K-12 students. But Noem seems to be modeling her political behavior based on what’s going on in other states with Republican governors who are also rumored as 2024 presidential candidates for the GOP.

“All year long, we have been trying to ‘out crazy’ Texas and Florida. And whatever is going on in those states should not be affecting our policy in this state,” Heinert said, adding that if Noem’s actions are based on her political ambitions, “then that's not being the governor of South Dakota.”

There is a pattern in South Dakota and across America to politicize public school curriculum. Conservatives seem to want American children to learn only of Manifest Destiny and the so-called triumphs in our Nation’s past.

Native News Online readers — both Natives and non-Natives — often comment that they learn things by reading this publication's stories about our history and culture that they did not learn while attending school. They tell us it is important to know about Native American history and culture. They ask: “Why didn't I learn this in school?”

In a modern society where we need to coexist with a multitude of races, ethnicities and religions, it is only right that we learn about others so we can respect one another. And we certainly do not need laws forbidding learning about other peoples’ histories and cultures.

Since CRT has not been an issue in South Dakota, one could argue that Noem’s executive order is a moot point. Or maybe she’s just trying to be divisive and cater to her shrinking base.