Walking Where My Grandmother Walked: My Journey to the Genoa U.S. Indian Industrial School 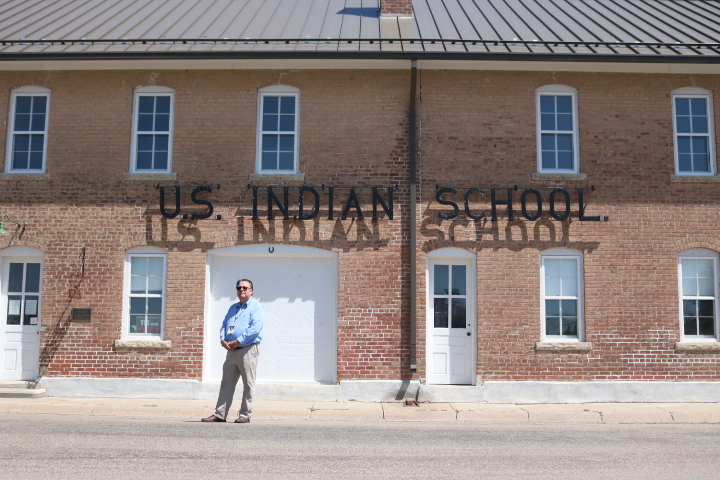 Opinion. The GPS directed us down a residential street in eastern Nebraska to the Genoa U.S. Indian Industrial School Museum. To my surprise, what remains of the 640-acre site that was once the fourth largest non-reservation Indian boarding school are just two buildings. They’re in close proximity to each other, including a museum that originally served as the boys’ dormitory.

A block away, a sign reads: “U.S. Indian School.” It is near train tracks where Native American children from more than 40 tribes across the country were dropped off and immediately sprayed with chemicals in case they had lice.

Among the children who attended the Genoa Indian School, which operated from 1884 to 1934, was my grandmother, Ellen Moore. She was 14 when she arrived in Genoa in 1920 from the Prairie Band Indian Reservation in Mayetta, Kansas. She was assigned to work in the bakery, according to school records.

My family does not know much about my grandmother’s experience at the Genoa Indian School because she — like thousands of other Native American children who attended Indian boarding schools — never spoke about what happened to her while she was there. That remained true for most of her 89 years of life.

A few years before she passed on, my grandmother did return to the Genoa Indian School with my aunt Lorraine Bessemer and a few cousins. She had traveled from the Michigan town where she settled in 1927 after marrying my grandfather and namesake, Levi Whitepigeon.

When she returned to Genoa many decades later, Grandma Whitepigeon still chose not to talk about her experience there. She was “real quiet” while they were visiting the boarding school though she enjoyed the rest of the trip, my cousin June Whitepigeon Clemence told me this week.

My trip to Genoa last weekend was part of a personal journey for me to find out more about the school and my grandmother. I was on my way back to Michigan from the Reservation Economic Summit with a side trip to the Mescalero Indian Reservation in New Mexico. The excursion to Genoa was far from a mere visit to see a tourist attraction. It was a pivotal stop on my own journey to understanding more about Indian boarding schools and how they’ve affected Native communities and families, including my own, for generations.

Over the past year, after the remains of 215 Indigenous school children were discovered at the Kamloops school in Canada, there’s been surging interest among Natives and non-Natives about Indian boarding schools. Native News Online’s editorial team thought it was important to meet the moment with year-round coverage of this important topic and has since published nearly 100 articles related to Indian boarding schools.

As our reporting on boarding schools intensified, so did my personal interest to go to Genoa. I knew I had to journey there. I knew I had to walk where my grandmother walked over 100 years ago.

So, on the Saturday of Memorial Day weekend, I visited the Genoa Indian School for the first time in my life. One pleasant aspect of the day was that I had the opportunity to meet our Senior Reporter Jenna Kunze, who has written about half of the articles Native News Online has published on the Indian boarding school subject. Our editorial staff works remotely, and since I live in Michigan and Kunze lives in New York City, it was the first face-to-face meeting for us.

We entered the Genoa Indian School Museum, which serves as an interpretive center, and were seated to watch a video that lasted about 15 minutes. We were both astonished as we watched the video, which presented a very “white” version of the boarding school experience with the narrator telling us that boys got to fish and students went into town for ice cream. I whispered to Kunze, “You would think every day here was the Fourth of July.”

The video presented a more sanitized version of Indian boarding school living than Kunze and our staff had reported about during the past year. It was contrary to what was detailed in the Federal Indian Boarding Initiative Investigative Report released by the U.S. Department of the Interior last month.

On sale at the museum’s gift shop was a book by a physician who treated the students who attended the Genoa boarding school. I bought the book —  Memoirs of Dr. Homer Davis: Physician and Surgeon, Genoa, Nebraska & U.S. Industrial School — which portrays the school in a favorable light for the Native American children who attended.

In the book, Dr. Davis writes: “The children were housed and fed and cared for well…For all of the pupils, the care was good, and plain nourishing food was provided.”

The information Dr. Davis presented was not consistent with what Kunze and I were told by a volunteer docent at the museum. She told us that the girls who attended were usually fed, but the boys went without meals at times.

Prior to the visit to Genoa, I thought I was going to be sad, but upon leaving I was feeling anger more than sadness. I was mad because visitors to the museum are shown a video with a false narrative about what happened in Indian boarding schools. To be clear, the federal government did not provide 365 days of fishing and ice-cream trips for these children.

Needless to say, I was severely disappointed by my visit to the former Genoa Indian Industrial School.

My disappointment, though, has refueled my commitment to make sure that the true story about Indian boarding schools is told. As the editor of Native News Online and grandson of an Indian school survivor, I am more committed than ever to making sure all of our relatives have the opportunity to tell their stories about Indian boarding schools and how they’ve affected their families and communities. It is part of the healing work that must happen for our ancestors, our elders, our families and our future generations.