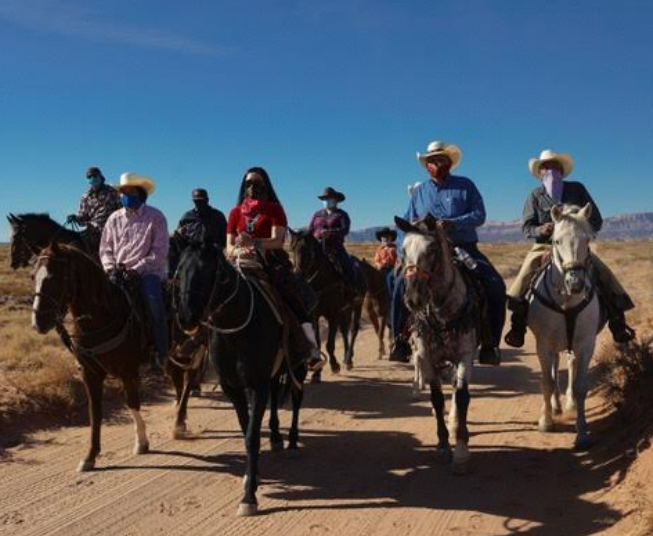 Opinion. Back in May, I talked to a Navajo woman, who gave her time as a volunteer to elderly Navajo citizens who were impacted by Covid-19. In addition to her full-time job with the federal government she volunteered her time to help get much needed supplies, such as water and other basic needs, to the Navajo elderly.

She relayed a story to me about an elderly Navajo grandmother who followed all of the lockdown guidelines. She told me the grandmother washed her hands and had stayed home for over a month. However, her children and grandchildren came to visit her and sadly the Navajo grandmother contracted Covid-19 and had died the night prior.

Overcome with sadness and grief, the volunteer said she had to cut the call short.

Back in May, it was already becoming clear that the Navajo Nation was being ravaged by the coronavirus. At one point, it had one of the highest per capita outbreaks of Covid-19 in the world. It became and remains the epicenter of the Covid-19 pandemic across Indian Country. As of Saturday night, there have been 12,447 positive cases and the death rate approaches 600 with 591.

Last week, as I worked on an article about Navajo voters riding horseback to vote on the Navajo Nation, I interviewed Allie Young, a young enterprising 30-year-old Navajo woman who organized the Ride to the Polls. Separate from the Ride to the Polls initiative, Young co-founded Protect the Sacred, a grassroots initiative created in response to Covid-19 to educate and empower Navajo youth and Native youth throughout Indian Country to rise up as the next generation of leaders by protecting their elders, their languages and their cultures.

Speaking about Ride to the Polls initiative, Young told me, “We rode to the polls to honor our ancestors who fought for the right to vote. We also rode to honor those who died from Covid-19, who are not here to vote in this election.”

At the end of my conversation with Young, I asked her about the Navajos for Trump movement. She said she didn’t think there were really all that many. She said in the age of social media, attention goes to those who make the most noise there—even if there aren’t that many.

The election results showed in the three counties in northeast Arizona that overlap with the Navajo Nation and Hopi Tribe, tribal citizens in precincts voted for Joe Biden with 73,954 votes to only 2,010 for Donald Trump. The Native votes translated to a rate of 97 percent for Biden as opposed to 51 percent throughout the entire state.

As of Saturday night, Biden led over Trump by 18,610 votes. Given the lopsided vote, it can be suggested the Navajo played a significant role in helping turn Arizona blue.

In spite of the pandemic that is literally killing its tribal citizens, it makes sense that the Navajo people would vote for Biden over Trump. The Trump administration has done a horrible job nationwide in handling the Covid-19 pandemic and the ineptness extended to the Navajo Nation. Response from the federal government to assist the Navajo Nation was very slow. Federal funds earmarked by Congress to provide Covid-19 relief were slow getting there.

Navajo Nation President Jonathan Nez has been extremely critical of the Trump administration’s mishandling of the pandemic and its slow response time to provide the tribal nation with assistance.

The Navajo Nation joined a lawsuit in federal court to receive funds allocated for Indian Country outlined in the CARES Act.

After Biden was declared president-elect on Saturday morning, Nez released a statement on the Biden-Harris victory. He said a large majority of Navajo voters had a major impact on the outcome of the presidential election.

“In October, I had the opportunity to meet face-to-face with Biden and Harris to talk about the ‘Biden-Harris Plan for Tribal Nations’ and we were assured that tribal nations would always have a seat at the table. The Navajo Nation now looks forward to working together with the Biden-Harris Administration to put that plan into action,” Nez said.

The Navajo Nation and other tribal nations in Indian Country look forward to working with an administration that has an understanding of the needs unique to tribal nations.

At various times on Saturday as celebrations broke out in major cities across the United States, I kept going back to the story about the Navajo grandmother who died in May and what Young told me about how the Navajo rode on horseback to honor those who died of Covid-19 and could not vote in this election.

In this historic new era, we must all work to ensure the votes cast were not in vain.