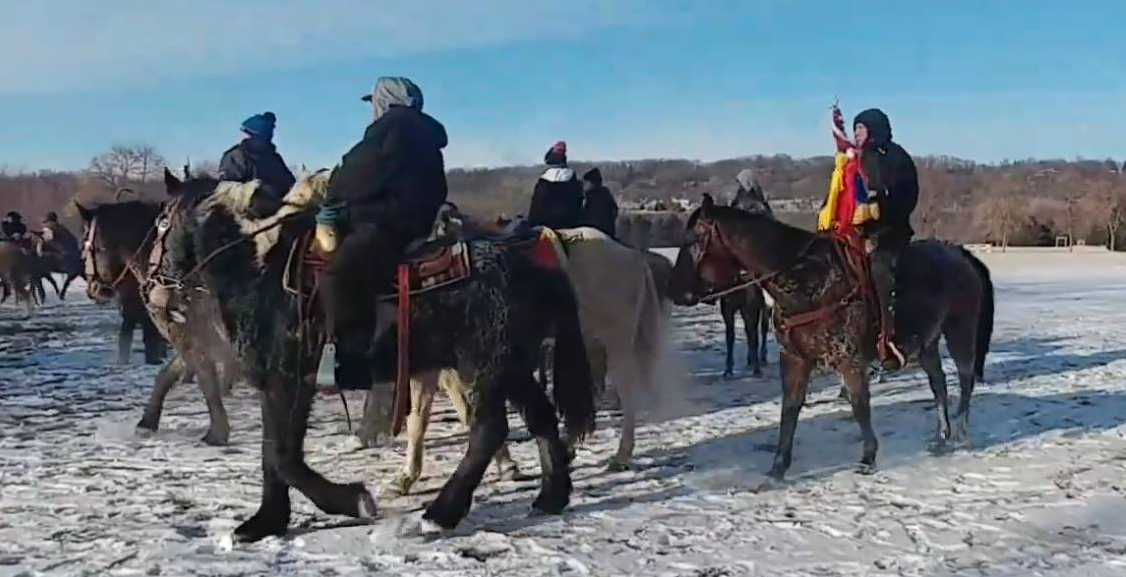 In the museum located at the base of the Lincoln Memorial, there is a plaque hanging on the wall which states:

I have stood near this plaque and watched lines of people pass by. Most simply read it and move on. Almost no one pauses or even raises an eyebrow. But when I stop them and point out that this plaque is literally stating that according to Abraham Lincoln "Black Lives Don't Matter," they look at me, turn around, read the plaque again, stare at it in disbelief, shake their heads, and then pull out their cameras to take a picture.

I then educate them on even more troubling history regarding our 16th President.

On December 26, 1862, the largest mass execution in the history of the United States, the hanging of the Dakota 38, took place, by the order of President Abraham Lincoln.

In the fall of 1862, after the United States failed to meet its treaty obligations with the Dakota people, several Dakota warriors raided an American settlement, killed 5 settlers and stole some food. This began a period of armed conflict between some of the Dakota people, the settlers, and the US Military. After more than a month, several hundred of the Dakota warriors surrendered and the rest fled north to what is now Canada. Those who surrendered were quickly tried in military tribunals, and 303 of them were condemned to death.

"The trials of the Dakota were conducted unfairly in a variety of ways. The evidence was sparse, the tribunal was biased, the defendants were unrepresented in unfamiliar proceedings conducted in a foreign language, and authority for convening the tribunal was lacking. More fundamentally, neither the Military Commission nor the reviewing authorities recognized that they were dealing with the aftermath of a war fought with a sovereign nation and that the men who surrendered were entitled to treatment in accordance with that status." (Carol Chomsky)

Three hundred and three deaths seemed too genocidal for President Lincoln. But he didn't order retrials, even though it has been argued that the trials which took place were a legal sham. Instead he simply modified the criteria of what charges warranted a death sentence. Under his new criteria, only 2 of the Dakota warriors were sentenced to die. That small number seemed too lenient, and President Lincoln was concerned about an uprising by his white American settlers in that area. So for a second time, instead of ordering retrials he merely changed the criteria of what warranted a death sentence.

Ultimately, 39 Dakota men were sentenced to die. And on December 26, 1862, by order of President Lincoln, and with nearly 4,000 white American settlers looking on, the largest mass execution in the history of the United States took place. The hanging of the Dakota 38.

Abraham Lincoln was President of the United States during an incredibly tumultuous time. Disappearing were the days when explicit forms of racism, such as the enslavement of African people and the ethnic cleansing of Native people, were socially acceptable. The country was not necessarily growing a conscience, but it was becoming increasingly difficult to continually justify the actions of 'modern' American society that were so blatantly evil and racist.

And President Lincoln was a product of his time. He did not free the slaves because he believed Black Lives Mattered. Nor did he change the criteria of what warranted a death sentence for the Dakota warriors because he believed Native Lives Mattered. As the quote hanging at the Lincoln Memorial states, he was merely trying to save the Union, an institution with foundations that were written specifically to protect white, land-owning men.

And when you are the leader of a nation whose Declaration of Independence refers to natives as "merciless Indian savages"… When you are the government official constitutionally responsible for appointing judges to a Supreme Court that uses the dehumanizing Doctrine of Discovery as a legal precedent for land titles… When you are the Commander and Chief of a military that (ultimately) awards 425 Congressional Medals of Honor for the ethnic cleansing and genocide of Native peoples…  When you are the democratically elected President of a white male supremacist Union whose Constitution specifically excludes natives, and women, and counts Africans as 3/5th human… Then saving that Union comes at a cost…for people of color.

You free the slaves but still tell your base that black lives don't matter.

You reduce a mass execution from 303 to 38 but still trample the human rights of Native peoples, and thus keep clear the path for your settlers and your nation to complete its self-proclaimed Manifest Destiny.

But the problem is not the individual, the problem is our foundations. To this day the United States Constitution contains 51 gender specific male pronouns regarding who can run for office, who can hold office and even who is entitled to all privileges and immunities of US citizenship. To this day, we have never completely abolished slavery (the 13th Amendment merely redefines and codifies slavery under the jurisdiction of our criminal justice system). And as recently at 2005 the United States Supreme Court referenced the Doctrine of Discovery in regards to a legal question of Native American land rights.

We need a national dialogue on race, gender and class. A conversation on par with the Truth and Reconciliation Commissions that took place in South Africa, Rwanda and Canada. I'm calling it Truth and Conciliation, and the goal is 2021.

Mark Charles serves as the Washington DC correspondent for Native News Online and is the author of the popular blog “Reflections from the Hogan.” His writings are regularly published by Native News Online in a column titled “A Native Perspective” which addresses news directly affecting Indian Country as well as offering a Native perspective on national and global news stories. Mark is active on Facebook, Twitter, YouTube and Instagram.