That Indian Princess Costume is Not Honoring Native Culture

Guest Opinion. Systemic racism comes in many forms, and one way it is popularly seen is in undignified, mass-produced Halloween Indian costumes. This blatant disregard for Indigenous peoples and their (very different) cultures is disrespectful and offensive. 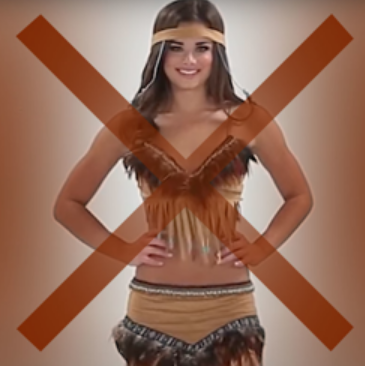 Wearing of these costumes is a sign of the overall acceptance of cultural appropriation and bastardization of Native cultures. While in many ways the nation is beginning to recognize that practices like blackface are indeed offensive and wrong, there are others who cannot grasp how dressing up like an Indian princess, warrior, queen, or chief is similar and just as bad. This tells us a lot about the value assigned to Native Americans in this country, and how we still have a long way to go to universal cultural respect.

Our society is much too comfortable mocking and sexualizing Indigenous peoples. Native men are characterized with big headdresses and loincloths, and Native women are put in scant, faux leather-fringed dresses, adorned with small headbands and feathers. Accepting the use of Indian costumes perpetuates a misrepresentation of Indigenous cultures and dehumanization of Indigenous peoples, creating psychological trauma that manifests in depression and shame – especially among our Native youth.

In 2016, First Nations conducted unprecedented research to increase our understanding of the dominant narrative about Native peoples in the United States called Reclaiming Native Truth. One of the points that came out of this research was about narratives – the broadly accepted stories that reinforce ideas, norms, issues, and expectations in society. These stories are passed along by family and friends, by the news media, entertainment and pop culture, education and public art, and policies, and much more. These narratives reinforce stereotypes and allow oppressive systems and norms to stay in place.

This is the situation with Indian costumes. We as a society are still accepting this mockery. Too many people in the United States hold false stories and beliefs about Native Americans in their hearts and minds. These untrue narratives make us invisible or reduce us to stereotypes. They are not ours, nor created or told by us. They are not our reality. They are held by mostly non-Native people, coming from a place of ignorance and blatant disregard, and oftentimes racism and oppression.

Join us in Reclaiming Native Truth

First Nations’ Reclaiming Native Truth is a national effort to foster cultural, social, and policy change by empowering Native Americans to counter discrimination, invisibility, and the dominant narratives that limit Native opportunity and access to justice, health and self-determination.

The goal is to move hearts and minds toward greater respect, inclusion, and social justice for Native Americans. It is time to change the dominant stories and create our own narratives and shift the face of public opinion. This starts by not dressing up, and not supporting or allowing Indian costumes within your space. You are not honoring diverse Native cultures by adorning yourself with a costume sold to the masses depicting the false ways we are seen. Our history does not fit inside a plastic bag on a shelf.

Donate
Free Newsletter
About The Author
Author: Marisa PageEmail: This email address is being protected from spambots. You need JavaScript enabled to view it.