It's Time to Release Leonard Peltier

OPINION. Historian Arthur M. Schlesinger, Jr. writes in Robert Kennedy and His Times, “On the day Robert Kennedy himself died, a New York Seneca, whose reservation he had visited in 1967, wrote to his widow: ‘We loved him, too. Mrs. Kennedy, Loving a public official for an Indian is almost unheard of, as history bears out. We trusted him. Unheard of, too, for an Indian. We had faith in him.’” 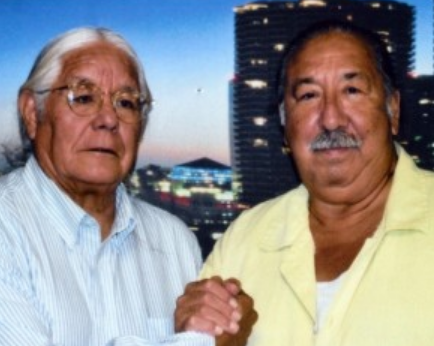 The late American Indian scholar, Vine Deloria, Jr., writes of Kennedy, he was a man “who could move from world to world and never be a stranger anywhere…Spiritually, he was an Indian.”

Kennedy was a hero to American Indians because he was one of the few politicians who paid attention to the mass poverty, lack of housing and poor healthcare on Indian reservations.

Kennedy, the younger brother of President John F. Kennedy, served in his brother’s administration as U.S. Attorney General. After the president was assassinated, Kennedy became a U.S. senator representing New York. In 1968, he sought the Democratic Party’s nomination for president.

On June 4, 1968, he won the California primary. Minutes after Kennedy gave his acceptance speech, he left the podium and was detoured to walk through the kitchen of the Ambassador Hotel. Sirhan Sirhan was waiting for him with a loaded gun and shot the senator three times at close range. Sirhan was wrestled to the ground and held until law enforcement arrived to arrest him.

Convicted of first-degree murder, Sirhan has been incarcerated for 53 years. On Friday a parole board panel in Los Angeles recommended the release of Sirhan. Friday’s recommendation does not grant Sirhan immediate release. The parole board has 120 days to review the two-panel recommendation. Then the governor of California will be given the opportunity to overrule the decision.

Friday’s recommendation that Sirhan can be released made me think about Leonard Peltier (Turtle Mountain of Chippewa), who has been incarcerated for 46 years for the killing of two FBI agents at Oglala on the Pine Ridge Indian Reservation in 1975.

To many American Indians and others, Peltier, who turns 77-years-old on Sept. 12, is a symbol of an oppressive federal system that confines Native people to a dismal place in American society. He is a political prisoner that we may only think about if we happen to see a bumper sticker on the back of a vehicle that reads “FREE Leonard Peltier.”

“If they can recommend the release of Sirhan Sirhan, who killed an iconic figure such as Robert Kennedy, they certainly should free Leonard Peltier,” Lenny Foster (Diné), who has served as Peltier’s spiritual advisor, told me on Friday. “He has suffered with severe health issues for years. His spiritual beliefs have sustained him.”

Kevin Sharp, former Chief Judge for the U.S. District Court for the Middle District of Tennessee, now in private practice, agreed to take the Peltier case pro bono and fight for his freedom.

“Rather than receiving equal protection under the law, Leonard Peltier was convicted based on fabricated evidence, perjured testimony, and a hidden exculpatory ballistics test,” Sharp said in a statement emailed to Native News Online on Saturday. “Even the federal government now admits they don’t know who shot the agents. Leonard remains in prison not because of proof beyond a reasonable doubt but because of politics. His last chance at freedom is the collective voice of people who care and dare to stand up for justice and mercy.”

Peltier is not up for parole until July 2024. Sharp doesn’t want to wait to attempt to gain Peltier’s freedom. Instead, Sharp would like to see President Joe Biden grant clemency to Peltier.

Sharp has the support of former United States Attorney James H. Reynolds, who prosecuted the Peltier case on behalf of the federal government. In a letter dated July 9, 2021 to President Biden, Reynolds asks the president to commute Peltier’s sentence.

“Leonard Peltier’s conviction and continued incarceration is a testament to a time and a system of justice that longer has a place in our society,” Reynolds writes in the letter. He concludes with “I urge you to chart a different path in the history of the government’s relationship with its Native people through a show of mercy rather than continued indifference. I urge you to take a step towards healing a wound that I had a part of making. I urge you to commute Leonard Peltier’s sentence and grant him executive clemency.”

“Congress hasn’t weighed in on this issue in years. I’m urging the Administration to release indigenous rights activist Leonard Peltier from prison due to COVID-19 concerns. At 75 with chronic health issues, it is urgent that we #FreeLeonardPeltier.”

Now that she is the secretary of the U.S. Department of the Interior—perhaps—she can get the president’s ear and whisper, “It’s time to release Leonard Peltier.”