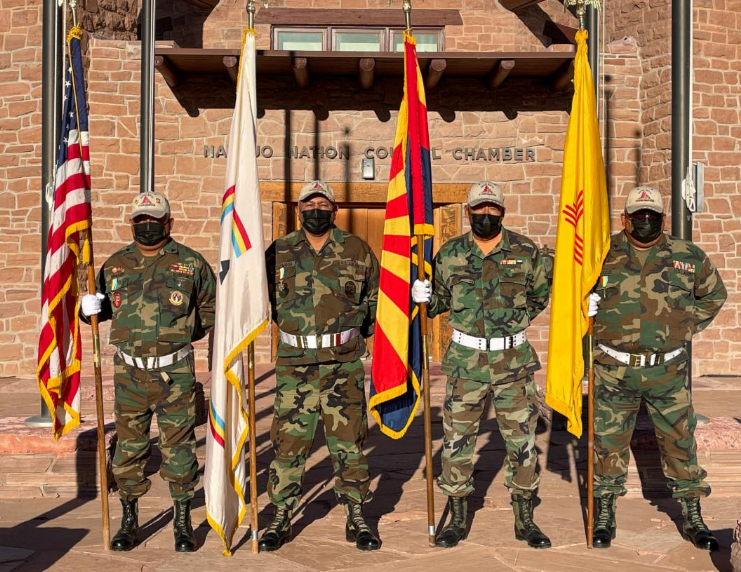 Today on Veterans Day, we honor the men and women who have served in the United States Armed Forces. Commemorated annually, Veterans Day originated as “Armistice Day” on November 11, 1919, the first anniversary of the end of World War I. Then President Dwight D. Eisenhower signed legislation in 1954 that changed the name to Veterans Day. It is a national holiday that honors all veterans—alive and dead—who have served the United States in the military.

The rich contributions of the Native American code talkers during World War II have been chronicled in recent years. The fact that their codes were never broken is witness to the power of Native language that was available to those who spoke it then. One irony of history is Native languages that helped to save democracy during World War II were, at one point, beaten out of many of that generation at Indian boarding schools. Thankfully, the language survived.

Known as warriors throughout history, that deep tradition has continued for Native Americans into modern times. The Pentagon reports American Indians and Alaska Natives (AIAN) participate in the military at a higher rate than any other racial or ethnic group in the United States.

Watching Native American honor veterans carry eagle staffs and flags into the dance circle during grand entries at powwows is breathtaking and a powerful experience. The power of the drum, coupled with the brilliance of the eagle feathers and colorful flags still cause a tremendous moment of remembrance to their service. They represent well because they served our country well.

The Office of Tribal Governmental Relations at the Veterans Administration sent Native News Online on Wednesday the latest statistics from 2017 on AIAN service to the United States military. Prepared by the Department of Veterans Affairs’ (VA) National Center for Veterans Analysis and Statistics,

Native veterans were more likely to lack health insurance than Veterans of other races.

The percentage of Native veterans with no health insurance (7.4 percent) was more than twice that of all other race veterans (2.9 percent).

With all the praise we offer veterans on Veterans Day, many veterans lack basic services for health care and too many are homeless. These veterans who sacrificed so much, deserve much more.

Today, Native News Online honors all warrior veterans and says “megwetch” (thank you) for all you did for this country.