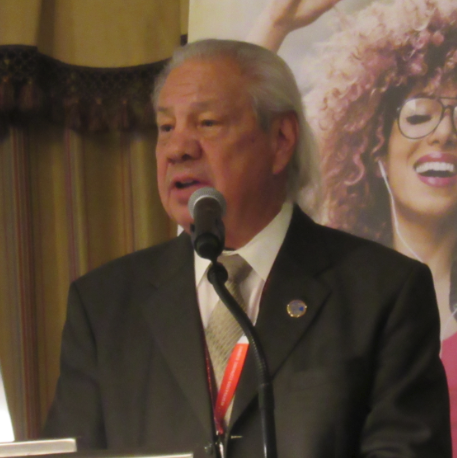 Echohawk was part of a voting rights program that also included vice president of Fair Count Jeanine Abrams McLean, the sister of voting rights advocate Stacey Abrams. Echohawk’s message was that Native people have to stay involved and persuade those who represent them in Congress to pass voting rights law.

Echohawk, who has served as the executive director of the Native American Rights Fund (NARF) since 1977, recounted the many years of legal fights against voting discrimination towards Native voters.

“From Alaska, Montana and North Dakota, we have fought and won cases against discrimination cases that tried to suppress the Native vote,” Echohawk said.

“Particularly up in North Dakota – it was very obvious. They knew most of our reservation residents did not have street addresses so they passed a law that said you cannot vote unless you have an ID with a street address, not a post office box number on it. Of course, that disqualified our people. That discrimination was very obvious. It was a violation of our rights under the Constitution,” Echohawk said.

While Echohawk was pleased with the court victories upholding the voting rights of Native Americans, he said he was troubled by the Brnovich v. Democratic National Committee decision by the U.S. Supreme on July 1, 2021 that overturned two Arizona laws that were deemed as restrictive against the Native vote in the state.

Echohawk said NARF represented the National Congress of American Indians in court by filing an amicus brief in Brnovich to address these issues.

On the same day the Supreme Court’s decision was released, Navajo Nation President Jonathan Nez told Native News Online “the opinion ignores the unique challenges that many tribal nations face during every election and does nothing to protect our voting rights and increase voting access.”

Echohawk says it is important for Congress to pass a comprehensive voting rights law to protect the Native vote. He said Sen. Ben Ray Luján (D—N.M.) plans to reintroduce the Native American Voting Rights Act (NAVRA) originally introduced by Sen. Tom Udall in 2019. The legislation that would ensure equal access to voting for all Native American voters living on tribal lands will empower tribal communities in their efforts to improve access to voter registration, education on voting procedure, and ensuring equal treatment of tribal identification at the ballot box.

“On top of geographic and linguistic barriers that make it harder for tribal members to vote, restrictive and burdensome voter registration requirements and I.D. laws are suppressing the Native vote across America,” Luján said in support of reintroducing the Native American Voting Rights Act while visiting the Navajo Nation in July.

“We really need the Native American Voting Rights Act,” Echohawk said. We all have to get involved in the political process in Washington, D.C. This is our only hope. Congress needs to fix what the Supreme Court did. We need to get Congress to act on this now,” Echohawk said to conclude his remarks at the COLT meeting.

Indian Country needs to heed the advice of John Echohawk and show our votes and our voices count.