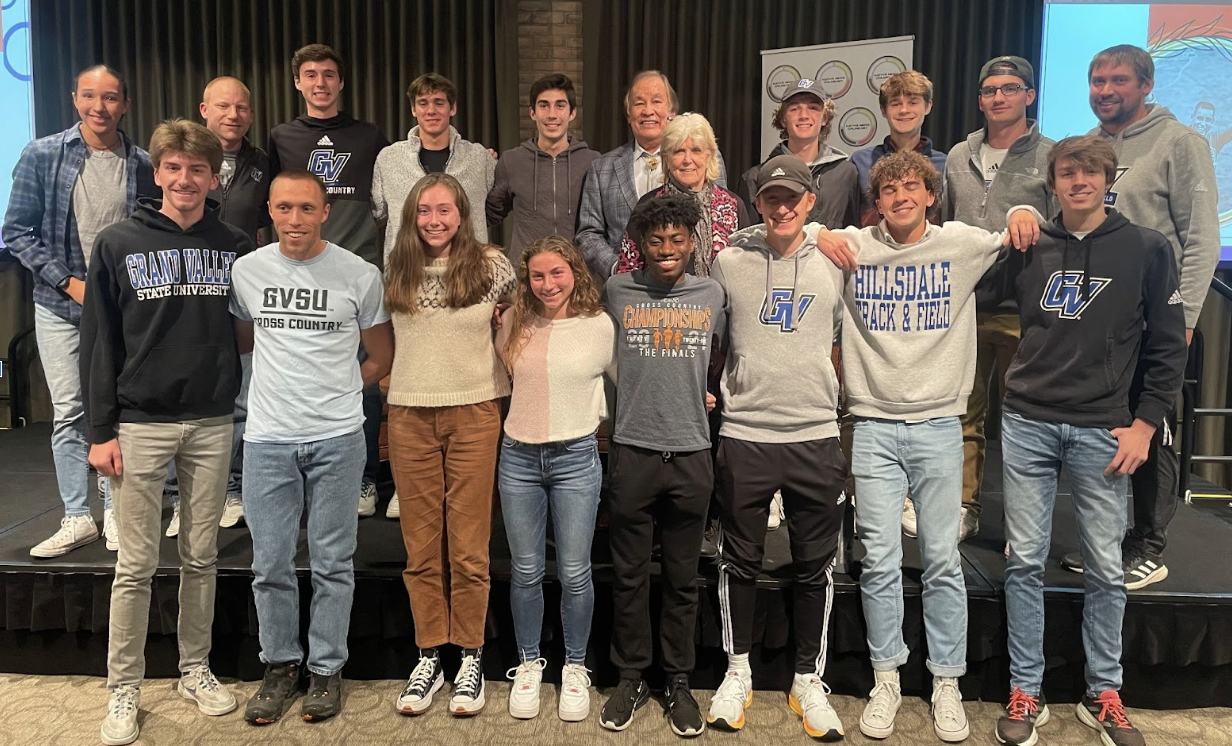 It was snowing lightly this past Tuesday in Michigan. It was the first snowfall during autumn. Because of the snow, I left several minutes for my trip to Kalamazoo from Grand Rapids for lunch with Billy Mills (Oglala Sioux Tribe) and his wife Pat.

I arrived 10 minutes early to pick them up at their hotel. They were already waiting for me in a guest sitting area.

After greeting Billy and Pat, we sat down to catch up before we left for lunch. It was the beginning of three special days of getting to know them much better. I have known Billy for several years and have seen Pat upon occasion, but did not know her well.

As a Native American journalist, who covers stories that are often unpleasant, the time I spent with the couple was truly a treat.

Billy, who turns 85 in January, has been married to Pat for 61 years. After six decades together, it is obvious they have a special marriage that is built of love and mutual admiration for one another.

They met almost by accident while Billy was attending the University of Kansas on a track scholarship. She was staffing a switchboard at a residence hall, and Billy kept calling another woman who he was dating. Unbeknownst, the woman he was dating had gone home for the weekend. So, after several failed attempts to reach her, Billy asked Pat out on a date. She told him that she didn’t date strangers. So, he invited her out to get better acquainted over a Coke. It was the beginning of a lifetime filled with love.

Before even meeting Pat, Billy had a dream to win an Olympic gold medal. It was a haughty dream for an Indian boy whose early life began on the Pine Ridge Indian Reservation, which still sits in one of the poorest counties in the United States. His mother died when he was only 8 years old of complications of tuberculosis and cancer. He was orphaned at the age of 12 when his father died. Before he died, his father implanted in Billy to have a dream. He took his father’s advice and took his goal to win an Olympic gold medal into a dream.

On Tuesday evening during the conversation with Billy Mills at WMU, Billy reflected on how important Pat has been in his life.

He said Pat listened to him as he told hwr his dream to win a gold medal and shw encouraged him every step of the way. She was there for him as he won a place on the 1964 United States Olympic track team. After qualifying, Billy borrowed $800 so Pat, who he had recently married, could accompany him to the Olympic games in Tokyo, Japan.

After winning the gold medal 58 years ago, Billy Mills has remained relevant as an author and businessman. He co-founded the Running Strong for American Indian Youth, a non-profit organization, which through its Dreamstarter grant program has helped Native Youth receive grants to help fulfill their dreams.

In June, I traveled to Albuquerque for the Society of American Indian Dentists conference. While there I interviewed Dr. Cristen Haase (Cheyenne River Sioux), a female dentist, who told me Billy Mills made a big difference in her life.

While at GVSU on Thursday I interviewed Billy for Native News Online’s  Native Bidaské (Spotlight) program. I told him how Dr. Haase, who did not know I knew Billy, praised him and how he changed her life because of the Dreamstarter program. He remembered well and explained how she used the grant as a springboard to inspire other Native youth to seek a career in dentistry or medicine.

“She used that $10,000 grant to inspire at least 30 other young Native American men and women to become dentists or other professions in the medical field,” Billy said. “And because of her, those who she inspired, in turn, inspired others to the dental profession.”

Later that evening during the Conversation with Billy Mills at GVSU, Billy once again praised Pat for being his life partner to share his successes as a family.

I later thought about the old adage: Behind every great man is a great woman. I am not certain that applies to every man, but I think it has for Billy. As I drove them back to the hotel that night, she told me how at the age of 60 she went back to school to obtain her Master of Arts degree. She told Billy back then, he was “on his own” jokingly. I am glad it was only a joke.

As I reflect on the hours of conversation I had with Billy Mills, I realize he is a gentle giant to Indian Country and around the world. And I appreciate how he told me he could not have done it without Pat.